Despite Peruvian cuisine coming into its own as a universally recognized gastronomic bounty, surprisingly few folks know much about Peruvian cuisine beyond guinea pigs and Pisco. In the second installment of of decoding the mysteries of Peru’s vast culinary history and refined present (see the first part here), we dive into Chifa and Nikkei cuisine, choco-tourism and of course, cebiche.

Ceviche
Ceviche (or cebiche locally) is so prevalent in the States, most people have tasted it at least once. If you have, you’ve tasted Peruvian food: cebiche is a huge part of the cuisine since there’s a lot of fish served along the coastal region of Peru. Corvina or striped bass is especially popular. Cebiche is raw fish, “cooked” or highly cured by the strong acidity of undiluted citrus, usually spiced with chilies. 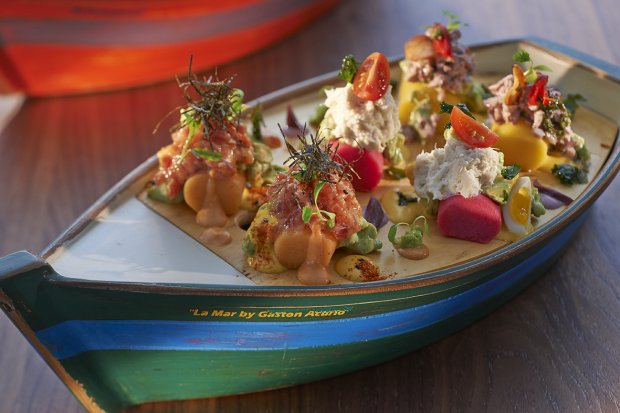 Speaking of Chifa…
Chinese cuisine in Peru? You bet. In the 1800s, Chinese contract laborers came to Peru, working on sugar plantations and mines. Many opened small businesses, including restaurants. Lima is in fact home to one of the oldest Chinatowns. Chinese and Chinese-Peruvians started growing their own ingredients and incorporating traditional Peruvian fare into their dishes. Gradually a culture of Chifas (Chinese-Peruvian restaurants) sprung up, and Peru is now home to the largest population of Chinese in South America.

World-renowned chef José Andrés, who traveled to Peru for the first time in September for a culinary conference, returned inspired to open his own Chifa-inspired restaurant in Washington, D.C. “Peruvian food and culture is the beautiful result of a country that embraced the world, so you see influences from France, Africa and and, of course, Asia,” says Andrés. “We visited a lot of places but I was really wowed by the young chef Mitsiharu Tsumura who’s restaurant Maido tells the amazing stories of Peruvian Nikkei, and Javier Wong the world master ceviche chef whose restaurant is so small and humble it doesn’t even have a name on the door, but perfectly captures the spirit of Peru.”

Dessert: Über-Tropical Fruit, Ultra-Sweet Pastries
While you may be familiar with pineapples and mangos as far as tropical fruit goes, cherimoyas, guavas and tamarillos don’t make it over here as often. Lucuma, a native Peruvian fruit, was alive and kicking as early as 200 A.D. — we have the pottery to prove it and today it’s a popular regional flavor of ice cream.

If you’re ordering dessert at a Peruvian restaurant, you’d better have a sweet tooth and make an appointment with your dentist. Take Suspiro de Monja — “nun’s sigh” — a crisp golden fritter filled with creamy, sweet filling (usually pastry cream or chocolate), originating in Spanish convents, supposedly so light they could make a nun sigh. If you head to your local Peruvian bakery, you’ll likely find alfajores, vanilla cookies sandwiched with Manjar Blanco (the Peruvian Dulce de Leche). Bakeries usually press shredded coconut into the caramel, and dust them with powdered sugar.

Nikkei restaurants
Japanese immigrants, many of them farmers and laborers, came over from all areas of Japan at the end of the 19th century. Ever since then, as new waves of Japanese emigrated to Peru, Japanese-Peruvian cuisine was born, sometimes called Nikkei. La Mar’s Chef Oka is from Peru, and of Japanese descent, reflected in his cuisine. “I came from a Japanese family with two generations born in Peru. We ate Japanese-Peruvian food for our daily meals. My grandmother was the best cook in my house – she made incredibly creative dishes of Peruvian food with Japanese ingredients.”

Choco-Tourism and Beyond
Some botanists say chocolate was born in the Andes foothills, in the watershed of the Amazon and Orinoco Rivers. Peruvian chocolate has seen a huge boom in the past 10 years; exports from Peruvian cacao growers have quadrupled since 2001 and organic cacao exports have doubled. We only see about 10% of the exports here in the States, but with major chocolate companies buying in, that’s about to increase. Peru’s Ministry of Tourism recently announced a new tourism circuit nicknamed “the Cacao route,” to draw tourists into the thriving chocolate industry with companies like Delectable Peru, Pica Peru and Magical Cusco Tours founded in the past 5 years.

More from Peru on Food Republic: