Has there ever been a more idiosyncratic type of food as sushi? Every itamae, or sushi chef, starts with the same basic tools (fish, rice, vinegar, wasabi), but the test of a real sushi star is how they transform those elements into something greater than their parts suggest. It’s a process similar to winemaking in that the best of the best know how to choose the highest quality ingredients and then use their skills to present those ingredients as works of art.

When people from anywhere outside of LA tell me how good their city’s sushi is, I smile and politely nod my head. The truth is, you can get sushi pretty much anywhere these days (grocery store, gas station, Nebraska) but that doesn’t make it good. You know what makes sushi good? The itamae. In Los Angeles, we’re lucky enough to have a full stable of world-class itamae working all over the city. They may not seem like superheroes, but after one omakase, you’re sure to believe in their magical powers.

In no particular order, these are the 8 Los Angeles sushi masters:

Name: Hiroyuki Urasawa
Restaurant: Urasawa
Claim to Fame: Luxury
Urasawa is one of the most expensive restaurants in the United States, with checks reaching well over $1,000 for a party of two. That may seem extravagant to some, but to those seeking the ultimate sushi experience, it would be hard to do better. This the type of place that Jiro dreams of and with the best fish flown in daily from around the world, the price is almost justified. Toro, uni, wagyu beef, gold leaf — it’s all here. Perhaps Urasawa means “baller” in Japanese? 218 N Rodeo Drive, Beverly Hills, 310-247-8939

Name: Keizo Seki
Restaurant: Sushi Zo
Claim to Fame: Speed
Got 45 minutes and $150? Zo will hook you up. Another player in LA’s formidable collection of high-priced omakase-only spots, Keizo-san is known for serving tiny portions of fish on top of rice that mimics the body’s internal temperature. With a new location downtown, you now have twice the opportunity to wonder if you’re really getting your money’s worth before ultimately deciding that you want to come back tomorrow. 9824 National Boulevard, Los Angeles, 310-842-3977 and 334 South Main Street, Los Angeles, 213-935-8409 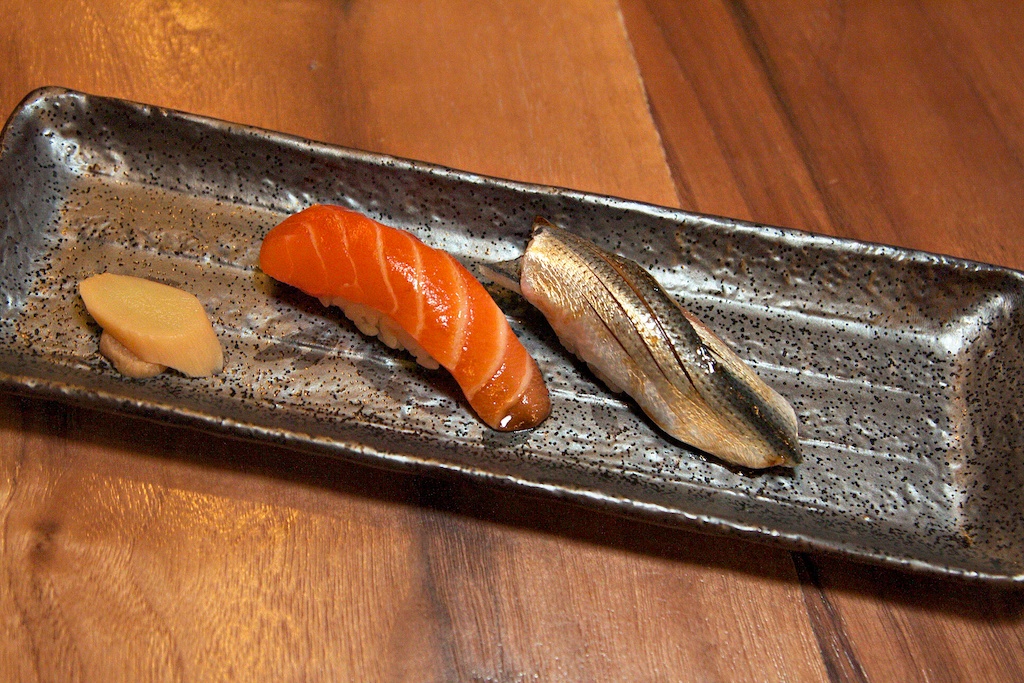 It’s nigiri like this that led to an LA law firm importing Hiroyuki Naruke in from Japan.

Name: Hiroyuki Naruke
Restaurant: Q
Claim to Fame: Edomae sushi (AKA Tokyo-style)
Omakase-only Q is the latest entrant in LA’s high-end sushi game and Naruke was imported directly from Japan by an LA law firm with an office in Tokyo. As the story goes, the partners liked Naruke’s food so much, they convinced him to relocate to LA (with the help of piles of cash, I assume). The result is a sedate dining room in the middle of downtown’s Jewelry District where course after course of vinegar-accented fish arrives until you cry uncle.
521 West 7th Street, Los Angeles, 213-225-6285, qsushila.com

Name: Ken Namba
Restaurant: Kiriko
Claim to Fame: House-made smoked salmon wrapped around mango
The Little Osaka neighborhood on Sawtelle in West LA is known for being a Japanese wonderland (although it’s become more pan-Asian recently). Kiriko is one of Sawtelle’s OGs, a small spot serving up one of the best lunch specials in town. For $40, you get an incredible omakase from Namba, including that luscious smoked salmon. It’s no surprise that Kiriko is one of über-critc Jonathan Gold’s favorite sushi bars. 11301 West Olympic Boulevard #102, Los Angeles, 310-478-7769, kirikosushi.com

Name: Niki Nakayama
Restaurant: n/naka
Claim to Fame: Lady power
It’s not really fair to say that Niki’s inclusion here is because she’s a female itamae working in a field dominated by men. Her sashimi is on par with the very finest in LA county. Her restaurant, n/naka, serves traditional multi-course kaiseki meals, so don’t go expecting to find a big glass case full of fish. Instead, save a few weeks’ salary and head in for a revelatory dinner. When you get to the shokuji one course, you’ll know exactly why Nakayama made the list. 3455 South Overland Avenue, Los Angeles, 310-836-6252, n-naka.com

Name: Yoya Takahashi
Restaurant: Hamasaku
Claim to Fame: Personality
Yoya is awesome. If you’ve ever sat at his bar, you know that. He shops for the best fish from all over the world every day and, in his spare time, gets down to The Grateful Dead. Allow him to do his thing and you’ll be sure to wind up with tiny firefly squid with a creamy miso or a king crab leg cracked open in front of you, covered in butter, and seared with a blowtorch. Hamasaku gets more credit as an entertainment industry power-lunch spot, but Yoya’s incredible knowledge and personality combine to form a rockstar itamae who holds his own with LA’s best. 11043 Santa Monica Boulevard, Los Angeles, 310-479-7636, hamasakula.com

Name: Osamu Fujita
Restaurant: Nozawa Bar
Claim to Fame: Back-room secrets
Chef Nozawa has been revered in Los Angeles for years, but when his eponymous restaurant in the Valley closed down a few years back, he partnered in a chain concept called Sugarfish that has since taken over LA. There’s seemingly a Sugarfish for every neighborhood these days, but in the back of Sugarfish Beverly Hills, you’ll find Nozawa Bar, a tribute to the original with Chef Fujita at the helm. It’s yet another omakase-only spot with only ten seats and one seating per night (two on Saturday). A recent meal there started with jellyfish and continued to impress all the way through the umeboshi palate cleanser. 212 North Cañon Drive, Beverly Hills, 424-216-6158, nozawabar.com

Name: Shigeru Kudo
Restaurant: Shibucho
Claim to Fame: Stealth
There’s a good chance that you would never find yourself near Shibucho’s Rampart Village location if you weren’t there specifically for sushi. It gets a little dicey there late at night, but once you’re inside, you’re treated to some of the best traditional sushi on the Eastside. Don’t expect California rolls here, but do bring your finest bottle of vino. Kudo is a major wine lover and if you’re willing to share, he might be, too. Word is, his cellar contains some incredible bottles. 3114 Beverly Boulevard, Los Angeles, 213-387-8498, shibucho.com

Check out these sushi stories on Food Republic: