In recent years, Boston’s hotel restaurants have morphed from second-rate dinning options to some of the city’s most exuberant culinary venues. Whether locally rooted or internationally trained, most of that credit is due to chefs having a keen eye for creating menus that make the most of their local ingredients and manage to make dishes feel inventive, exciting and even stylish — words that aren’t often synonymous with Boston. Here are 5 examples to check out, even if you’re not checking in.

The Liberty Hotel: Clink
Half the delight of coming to Clink at The Liberty Hotel is walking inside the hotel itself. Housed in the Back Bay’s imposing former Charles Street Jail, Clink’s small, warmly lit dining space is just off the hotel’s soaring central rotunda and cupola, which is terraced with bar seating and carries the chatter of guests in the ether like a cavernous baroque church. Clink is one of five restaurants at The Liberty Hotel, and run by chef Joseph Margate — whose modern American cuisine is a circus of international tastes and flavors ranging from Japan to Italy and England. For dinner, there is local burrata cheese served with basil-pickled greens and cherry tomatoes. The Wagyu beef tartare is intense and sweet, cut with a horseradish ice-cream that mellows out the dish. The charm here comes from the little details that remain from the old prison space that inspires the restaurant’s name. Former jails cells are now cozy dinning nooks, which are private and perfect for date night. 215 Charles Street, 800-325-3589; libertyhotel.com

Mandarin Oriental: Asana
You can’t leave the Mandarin Oriental’s Asana restaurant without trying chef Andrew Beer’s brioche lobster roll. Or his buttery New England clam chowder. The waiter will also tell you that their confit of trumpet royal mushrooms with egg, yuzu and argan is exquisite, and it’s probably best if you order this too. At Asana, you could come for steak and eggs or airy Belgian waffles at 9 a.m. and they’re delicious. At lunch, which is often crowded with men and women conducting serious business meetings, you could simply order the gem lettuce Caesar salad with fresh white anchovies and Parmigiano Reggiano twills, and that too would send you home smiling. And at dinner, if you can manage to get a table, start with the terrine of Hudson Valley foie gras flecked with cherries, bacon and pistachio. The weekend brunch, reservations strongly recommended, is possibly the most rollicking service. Asana’s open plan dinning room is shared with the hotel’s M Bar and Lounge, a very popular weekend spot for its music and for cocktails like The Bog, a crisp, sweet cocktail of cranberry vodka, cranberry wine and Prosecco. 776 Boylston Street, 617-535-8888; mandarinoriental.com/boston

Boston Harbour Hotel: Rowes Wharf Sea Grille
Chef Daniel Bruce, who heads the kitchen at the Boston Harbour Hotel’s Rowes Wharf Sea Grille and recently released a cookbook, Simply New England, has a thing for Italy. This is not immediately apparent on his menu, which is almost exclusively rooted in New England cookery. It has more to do with his love for simple, fresh ingredients — a very Italian sensibility, and Bruce spent nearly five years cooking in kitchens across Italy and France. But in his restaurant, which overlooks Boston Harbor and has outdoor wharf seating in the summer, he works hard to elevate regional staples to high art. Try his pan-fried Jonah crab cakes served with bitter frisee and radicchio salad to begin to understand his love of ingredients. At dinner, the braised monkfish osso buco is brought to the table with a bright fennel, lobster and tomato broth that lifts the dish. Bruce also leads the kitchen at the hotel’s Meritage restaurant, which is more of a fine dinning, small plates and wine pairing affair. He and the hotel host Boston’s annual wine festival, which runs January through March, now in its 25th season. 70 Rowes Wharf, Boston; 617-439-7000; bhh.com 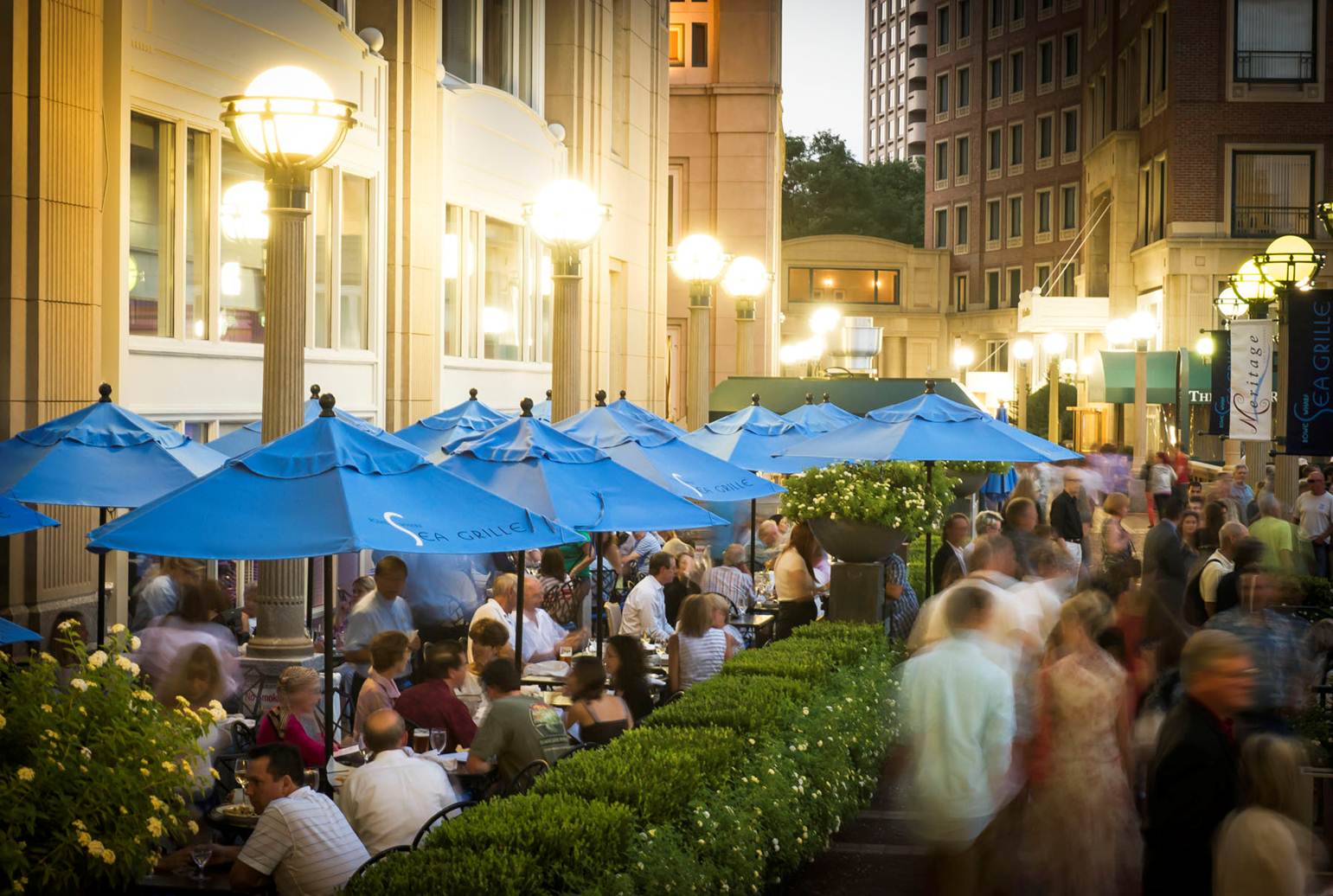 InterContinental: Sushi-Teq
Boston’s InterContinental Hotel dinning spot, Sushi-Teq, one of three drinking and eating venues at the hotel, offers the most unlikely pairings of two far-flung culinary cultures (Japan-meets-Mexico) on offer in the city today. Delicate sashimi pairs surprisingly well with a selection of nearly 100 vintage agave tequilas, and with intriguingly flavored cocktails like their Fumasa Margarita, made with organic agave nectar and smoked paprika. Chef Taki-ishi’s menu changes with the availability of seasonal fish. Stalwart items, like The Greenway, one of the chef’s signature rolls, is light and fresh, made with avocado, roasted bell pepper, shitake mushrooms and burdock root and served with an avocado habanero sauce. Sushi-Teq is tiny and jazzed out in electric blue, green and red lit surfaces. Nothing about this place is demure. Tequila enthusiasts will find that it is most likely the best stocked tequila bar in town, and those who shy away from the Mexican tipple can order craft beers, a martini, and of course, amazing sushi. 510 Atlantic Ave., Boston, 617-747-1000; intercontinentalboston.com

Four Seasons: Bristol Lounge
Executive Chef Brooke Vosika has brought a farm-to-table aspect to the Four Seasons’ casually elegant Bristol Lounge restaurant and bar. The place never seems empty, especially on the weekends when, in addition to breakfast, lunch and dinner, the restaurant serves a wildly popular and often sold-out English-style afternoon tea, complete with scones and clotted cream, and flutes of Kir Royal. Lunch here is kept simple, and most people swing in for Vosika’s signature Bristol Burger, served with housemade pickles, aged Vermont cheddar, a sweet Brioche bun and earthy truffle and parmiggiano fries. The short rib Bourguignon is served atop a pool of celery root puree, flecked with tiny beech mushrooms, baby turnips; it’s so tender it falls apart with the touch of a fork. During any service, the menus seem to be tailored to accommodate guests’ increasingly acute dietary needs, offering entire menu options for those who avoid dairy, nuts, gluten and shellfish. 200 Boylston St, Boston; 617-338-4400; fourseasons.com/boston

The Ritz Carlton: Artisan Bistro
Artisan Bistro at Boston’s Ritz Carlton is a much different restaurant than the hotel group typically offers. For starters, it is as casual as you might expect a bistro to be, attracting a mostly local, young professional crowd and the spillover of nearby theatergoers. Chef Andrew Yeo has built a bistro menu that is all about regional seafood. You might start with the sweet, mini lobster tacos with mango chill and guacamole, or try their briny grilled oysters with rosemary brown butter. Chef Yeo recommends the Fishermen’s Pot — a giant silver kettle (best when shared) of Maine lobster, jumbo shrimp, sweet scallops and the catch of the day. It’s not so casual that there isn’t a sommelier on hand who will run through the long wine list with you, and often suggest the Cakebread Sauvignon Blanc, which they serve here by the glass. The long dining room, with its enormous bar and collection of handsome heritage furnishings, is often crowded. If you can’t get a table or place at the bar at Artisan Bistro, stroll next door into the hotel’s Avery Bar, sit by the fire, and order from the menu there. 10 Avery Street, 617-574-7176; ritzcarlton.com/en/properties/bostoncommon