There was no rain, but still they came. While the rest of the country shivers and soaks, California has suffered through the driest winter in decades — with just over two inches of rain so far, perhaps the driest ever. It’s been a terrible year for mushrooms, and mushroom hunters are grim and of steelier eye than usual, protective of what little they can find (morel fans must rejoice in secret — the dry weather’s summer fires will mean a springtime boon). Mushrooms bloom in mystery, their mycelial organism and its secret whims hidden underground. From the caked earth, nary a sprout; and yet at the Santa Cruz Fungus Fair in early January, the mushroom hunter was on full, majestic display.

Sipping a tepid brew of coffee and ground reishis (earthy and gritty — new meaning to the phrase “muddy cup”), I wandered among the specimens, human and mycological. The mushrooms had mostly come from the northern, wetter regions of the state: Humbolt and Mendocino Counties. Their hunters, from parts unknown. Like their quarry, they burst forth as if by magic. The lot was packed with their dusty cars, pine cones and turkey feather talismans drying on dashboards. Mycophiliacs — fungus fans — tromped around in raincoats and muddy hiking boots, or flitted by in Chacos, wool socks and a bloom of patchouli. Cargo pants and hemp satchels stuffed with dinged Nalgenes and dogeared copies of David Arora’s totemic Mushrooms Demystified. Knit wool hats and wide-brimmed rain-proofs (overheard: “I love a wet woods!”).

Mushroom hunters are easy to identify. Mushrooms are not. “The mushrooms don’t read our books,” Bay Area biologist Debbie Viess — a.k.a. “Amanitarita” — said to open her talk, “Zen and the Art of Mushroom Hunting.” And Zen it surely is — foraging, especially for mushrooms, connects us with the mysteries of nature. The fun of mushrooming is in these surprises. Dun-colored boletes that stain blue when sliced. Morels that shoot up after forest fires — the only living thing in the charred earth. The parrot mushroom, waxy and glistening in greens, oranges, and blues. The ugly woody polypore Phaeolus schweinitzii that produces incongruously vibrant dyes (and dreaded “cubicle butt rot” in trees). The frightening “trumpets of death” that taste delicious. And the cute-as-a-button Amanita phalloides, introduced to California in 1938, a stowaway on the rootstock of ornamental French cork oaks, planted on the lavish grounds of a Monterey hotel. This is the death cap: One taste can kill. (Lethal to humans but essential to trees, amanita is one of a family of “mycorrhizal” mushrooms that live symbiotically on the roots of trees — what one lecturer called “the photosynthetic appendages of fungi.”) 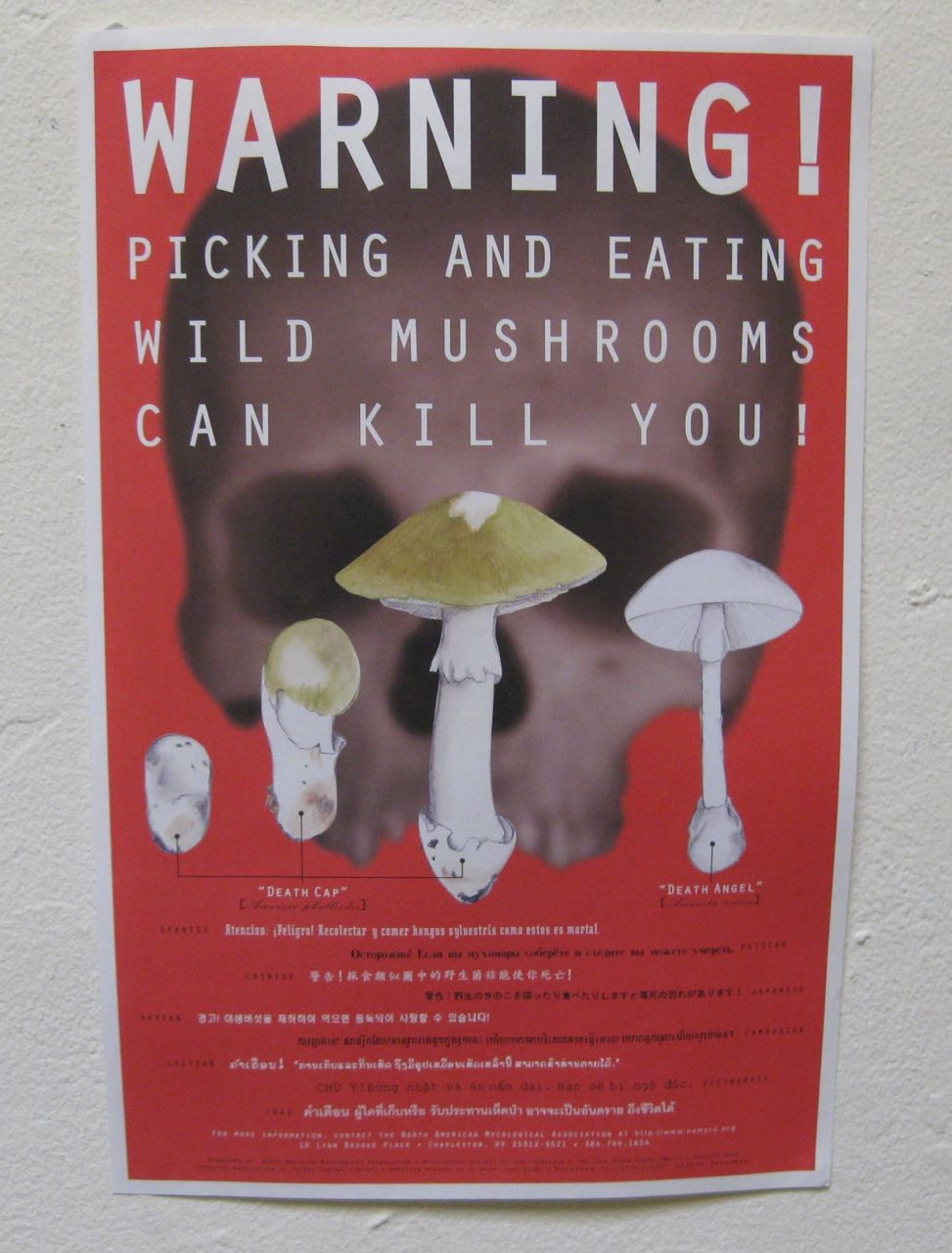 The mushroom has many mysteries.

Of course, in mystery also lies danger. Yes, people die from eating mushrooms. From Emperor Claudius to Nicholas Evans, it has happened, and when it does, the world takes notice. As deaths go, poisonings rank high in press-to-plausibility ratio, and mushroom poisonings even higher. Every year, less than one percent of all poisonings come from fungi — and of those, only one percent or so are fatal. About 10,000 kinds of fleshy mushrooms, or “macrofungi” have been identified (“fleshy” means they produce a fruit — molds, yeasts, rusts and other non-fruiting organisms, make up the million or so other members of the fungi kingdom). Of those, half a dozen, like the death cap, are commonly considered lethal. And yet they get the glory.

Defiantly kilted, with blue-dyed hair and a Mad-Hatter glint in his eye, professor Tom Volk spent his talk setting records straight, debunking wives’ tales like the old saw that poisonous mushrooms turn silver coins black. Our fungal fears are often overwrought. A study from the 1960s claimed to have found amanitin liver toxin in all mushrooms — not just the deadly half-dozen. Volk revealed it had been conducted with contaminated lab equipment.

As much as ‘shroomers like smashing myths, they enjoy creating their own. The Fair’s bookstore shelves stocked crowd-pleasers like the Field Guide to North-American Truffles. But the most popular were the most curious: The Sacred Mushroom Seeker, The Mushroom in Christian Art. Volk mentioned one particularly nebulous connection between the hallucinogenic red-and-white Amanita muscaria and Santa’s flying reindeer. A shamanic, shroom-toting Santa has yet to catch on. But the wives’ tales have staying power.

David Arora, the demystifier himself, packed the lecture hall in the day’s last talk, to spin the Wheel of Fungi, a bingo wheel marked with topics from boletes to foraging to medicinal mushrooms. A walking encyclopedia, he can talk on just about anything. “We’ll let the wheel decide,” he said. It decided to lighten the mood. Its first two spins landed on “wild cards:” the first, a sip of Johnny Walker Black; the second, Jack Daniels. Then the pointer pointed to “pick your poison,” and Arora took a twist. “A poisoning of the mind,” he said. “Mycophobia.” Whence our fear of fungi? Blame the British, Arora said. He quoted from Conan Doyle’s historical novel Sir Nigel:

Wet and rotten leaves reeked and festered under the foul haze which rose from the woods. The fields were spotted with monstrous fungi of a size and color never matched before — scarlet and mauve and liver and black. It was as though the sick earth had burst into foul pustules; mildew and lichen mottled the walls and with that filthy crop, Death sprang also from the water-soaked earth.

And yet at the fair, no reeking haze wafted the halls, but the sweet aroma of maple-scented candy caps, mixed into ice cream by Penny Ice Creamery. (Buy them ground, and blend a dash into your next batch of pumpkin bread.) And second to Arora’s lecture hall, the busiest space was the kid’s craft room, where tykes and their parents tie-dyed scarves in crock pots of simmering mushrooms. If anyone is most beguiled by the mysteries of the universe, it’s children. To find a mushroom, Amanitarita advised, “think like a mushroom.” To love mushrooms, think like a child.

William Bostwick is the beer critic for the Wall Street Journal and the author of  The Brewer’s Tale: A History of the World According to Beer , to be published this fall by W.W. Norton.