If you’re in the mood to jump on a stationary bike, pop on some headphones and get in the zone, JES is about to do you a whole bunch of favors. If you’re into dance music, have even heard of Tiesto (to whose label she’s signed) or have been to a club in the past decade or so, you’ve heard Grammy-nominated JES’ sultry, echoey voice over lots of wavy synths, thumping beats and other reasons we love electronic music. But listen to her acoustic stuff, too. Listen to it all.

Born and raised in New York City, JES started recording vocals in studios while attending an arts high school, quickly became a regular in bands and on the DJ circuit, recorded a Billboard #1 hit (which they totally played at my senior prom) and now tours the globe pretty much constantly. The secret weapon to her longevity: mastery of healthy living habits in a world famous for no sleep, tons of booze (etc.) and 3 a.m. pizza. Not that 3 a.m. pizza is totally out of the question. Depriving a New Yorker of pizza is about as unhealthy as it gets. Here, one of Vibe’s top 10 female DJs of 2013 tells us about her eating and fitness habits, and shares a killer brown rice crab cakes recipe below.

Why is good nutrition invaluable to a successful touring musician?
I’m on a mission to not get sick all year. Being a singer and DJ, I can’t be sick — I’ve never canceled a show for being sick. It’s so easy with long flights and all the cities and germs, I’ve seen singers trash themselves and still sing but if I wasn’t taking care of myself I don’t think I would last. Everything I do is good for me, to feel strong.

What’s your motivation to focus on a healthy lifestyle in an industry famous for uh…not those values. Hang on, let me refill this vodka Red Bull.
I know what it feels like to feel good about yourself and feel comfortable in your skin, good in your clothes, good on the stage, good in your pictures. It’s not that nice a world out there sometimes, so I’m going out with my best foot forward. I want to do this until I’m very old.

Do you feel pressure to set a good example for DJs who live off whiskey, candy and cigs?
Even when I’m at a festival and we’re having a good time I try to watch myself. I think drinking is the one thing you should always watch out for, health-wise. But like I said I don’t like to preach, and sooner or later the people I know who are like “party-party-party,” well, you can’t do it forever. There will be the point where you have to take care of youself a little bit, occasionally I’ll say something. And I try to keep it to two drinks.

You’re usually gluten-free. How did you decide on that diet?
It has to be a choice, but I feel so much better. I don’t get headaches. I feel like a lot of things have changed, handles on the hips, back, just went away. I try to push it on people, like “you don’t understand how amazing it feels!” Not everybody has that determination. You have to commit. I’m pretty strict. I’m sure people wouldn’t want to eat the way I eat most days, but I give myself one day a week to go off a little. Not too much, but I just love pizza so much.

You were named to Vibe’s top 10 female DJs of 2013. Any other girls on the list who are into the healthy lifestyle?
I was just with Krewella in the Philippines. They’re on a really tough schedule too, but they’re looking good. They were coming from another island, and when you’re doing that type of thing with one show then six hours later another show in another city, you gotta get your sleep and eat healthy, and they seemed to be doing it right. And they’re based in LA, where everyone works out.

So you get out of the club and it’s 3 a.m. What do you eat?
That’s a hard one because they take you to good places. If you’re in Asia you can find anything you want — sushi, dumplings. When I’m home I’ll have a slice of pizza. I seriously have a weakness for it. There’s something about doing a great show where you feel like you deserve something after. I’m healthy, but I do one day a week and have whatever I want. I usually go for pizza or a diner omelet.

Have you ever had a really good dinner at a club?
There have been a couple. Not a lot of clubs have a restaurant, but I once played this Russian club in Brighton Beach with like, seafood towers. It was amazing.

What’s on your tour rider? Anything non-negotiable?
Tea, water, fruit, vegetables and a bottle of rosé. Definitely a teapot and water, but I’ll want my rosé so I can have a little after the show…maybe a little before. That’s pretty non-negotiable. You should try Ott, it’s this peachy French rosé that’s delicious.

What’s one of your go-to recipes at home? 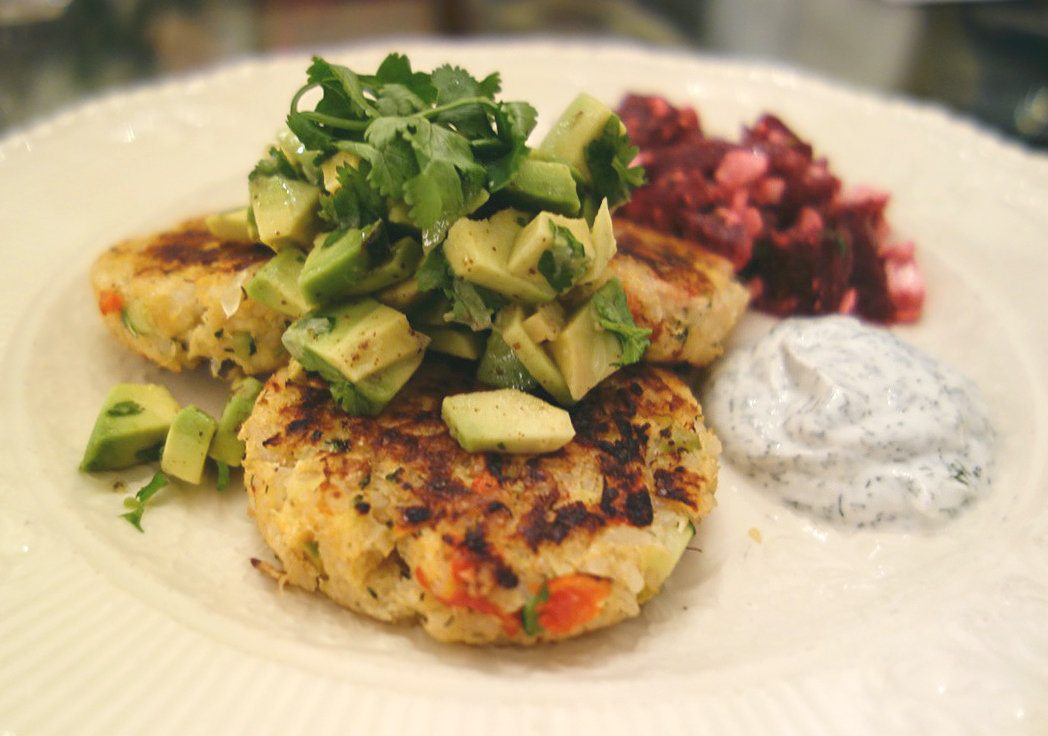 It’s no secret to my family and friends that I love to eat! With that said I am careful — I’m a pescatarian and I don’t eat wheat or white carbs six days of the week. It might sound hard but I do one “cheat” day per week where I can more or less eat what I want and I take full advantage of it. Those remaining days I reinvent the things I miss the most (like crab cakes) and create a new version of it that fits into my diet.

All of my new version recipes are low-fat and gluten-free but I try to maintain the flavour of the original dish as closely as possible. These crab cakes are low in fat, high in protein and bridge the physiological gap of wanting to be healthy but needing to feel like you have eaten something indulgent. The real key to making this work is to wait for the rice to cool down after it’s been boiled and the process it very lightly with a blender/food processor. A few pulses will chop the rice just enough to give the perfect consistency and hold to help the cakes maintain their shape