The New Year is here, and chances are that you’ve at least considered the possibility of following some sort of diet. You know that shedding those few extra pounds is at the top of your resolutions list, but are unsure about exactly which healthy eating plan to follow. That’s where we come in. We’ve researched and listed some diets that you probably shouldn’t undertake in your quest to drop a waist size or two. Don’t say we didn’t warn you.

1. The Green Coffee Diet
On his television show, Dr. Oz touted the benefits of green or unroasted coffee extract as a way to help people lose weight thanks to an antioxidant called chlorogenic acid. Since then, Starbucks added green coffee extract to its menu, offering fruity drinks infused with “the natural energy from coffee, but with none of the coffee flavor.” A study by the University of Western Australia, one of the few that has been done on the extract, found that it did little more than give mice signs of diabetes. Anecdotal evidence from humans, like a few who tried it on the Dr. Oz show, did support green coffee extract’s effectiveness as a weightloss drug. But it certainly could use more research.

2. Juice Cleanse
Most juice cleanses claim that consuming liquified fruits and vegetables makes them easier to digest. The truth is that juicing does away with the fiber in foods, and fiber is great for digestion. It can also remove important antioxidants found only in the skin of certain foods. What’s more, a juice cleanse rarely includes enough protein for a healthy, balanced diet, no matter how much almond milk is added. And it can lower your metabolism – in extreme cases, permanently. It can indeed help you lose weight, as any crash diet or fast can. But you’re likely to put it back on once you’re back on solids.

3. Eco Atkins
He’s back! In eco form. Dr. Atkins, who encouraged people to gorge themselves on meat, cheese, butter and eggs, while eliminating all carbs from their diet, has been criticized for his regimen’s dangers to heart health. It was also pretty impossible for vegetarians to follow. And all that meat sure had a high carbon footprint. The “eco” version of the diet essentially replaces all the bacon, bun-less burgers and cheese with soy bacon, soy burgers and soy cheese. As if the soy monoculture plaguing this country is somehow “green.” Weight loss can be achieved on this diet, but you have to eat a whole lot of processed fake meat to get there.

4. The Paleo Diet
The idea here is that man was meant to eat the way he ate a million years ago, before farming (so no grains or milk) and before food processing (so no refined salt, sugar or oil). Man was meant to hunt and gather. The problem, as a 2012 TED Talk pointed out, is that modern paleos interpret this as a meat-heavy diet. Paleolithic man, however, probably ate a mostly vegetable-based diet, depending on his local climate. The talk reignited the debate over what the human body was naturally built to digest. Meat? Gluten? Dairy? The debate rages on. The Paleo Diet, at best, needs tweaking.

5. The Pilsuk Diet
The idea behind this diet is simple: eat breakfast like a queen, lunch like a commoner and dinner like a pauper. Also, do 30 minutes of daily exercise and drink no liquids after 7 p.m. Sounds reasonable, right? Studies show that a big breakfast can reduce the production of ghrelin, a hunger-inducing hormone. So, who came up with this simple plan? It was born out of a hit Korean teen drama called Dream High, in which a character named Pilsuk, who wants to be a pop star, aims to lose 65 pounds in 200 days. She succeeds: the actress who plays her simply sheds the fatsuit she was wearing.

6. The Cookie Diet
This one is easy: eat cookies instead of meals. The cookies have been especially designed to replace breakfast, lunch and snacks. You order them online. If this sounds like a tasty way to lose weight, rest assured that these are not Tollhouse cookies. If it sounds easy and simple, well, it is. But, overall, we’d say it sounds, um, kinda dumb. 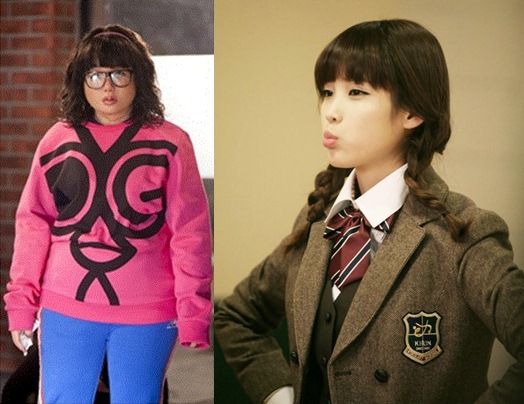 The Piksuk Diet was inspired by a character on a Korean teenage drama.

7. Gluten-Free Diet
Roughly 1% of the population are celiacs, as in they cannot digest gluten. And yet, millions more are experimenting with giving up wheat, which represents some 90% of the gluten in the American diet, in order to lose weight. This boggles the mind. Giving up bread is a tragedy. Why do it if you don’t have to? Well, it’s true, you could lose weight. But not by cramming your face with gluten-free crackers and cookies. Replace some bread and pasta with whole grains like millet and quinoa, add beans to your diet. But for heaven’s sake, don’t cut out all gluten just to be skinny. You’ll be sad-skinny.

8. Flexitarian Diet
It’s a combination of “vegetarian” and “flexible,” and it’s probably the sanest way to eat. Cut out meat when you can, eat it on occasion, like when you go out for a big, fancy dinner. Fill your diet with vegetables, legumes, nuts, fruit… pretty much any whole food you can think of. Sugar is fine, so is salt and oil – in moderation. Like we said, it’s the sane person’s diet. Why anyone has to label this way of eating with such a silly name is beyond us.

9. Acid Alkaline Diet
The theory here is that controling the body’s pH will help it lose weight. PH is a measure of acids and alkalines. So, having too much of one or the other is considered unhealthy. The diet mandates 80% of what you consume be alkalizing foods, the rest acid-forming. Alkalizing foods include fruits, vegetables, legumes, whole grains, nuts and soy. Again, seems like a smart list of foods to eat, regardless of their pH. But having to constantly look up the pH of what you’re about to put in your mouth seems like a drag.

10. French Women Don’t Get Fat Diet
This diet has no restrictions as far as what you can eat. Only how much. You can add all the caviar, foie gras, chocolate, cheese and wine your heart desires to your menu. So long as you savor each bite, maintain good posture, breathe and keep portions small. Mild exercise is also recommended. And surely a smug, inflated air helps, too. Oh, and cigarettes. Lots of cigarettes.