Nicolas Jammet is showing me a photo of his kale farmer. It’s striking in black and white, printed in digital silver gelatin and hanging on a white brick wall in the style of a West Chelsea gallery. Actually, it looks like it belongs in the Morrison Gallery. A kale farmer getting the Steve McQueen treatment? Welcome to Sweetgreen — a socially astute, health obsessed, Hot Chip on the stereo restaurant my work neighborhood in New York City is going nuts for.

I’ve locked eyes with this kale farmer before. For months, actually, while waiting in line — sometimes 20 minutes a crack — for salad. Yes, salad. The kind you get on the side with your croque monsieur at brunch, and get hacked into a million plant-like particles at one of those lunch places that sounds like a cooking reality TV show. So the deal is, Sweetgreen sells salad, and cold-press juices and yogurt too. But mostly salad, which the well-scrubbed agency kids working around NoMad simply cannot get enough of. My wait is 20 minutes when I go off-hours, but can last over 30 minutes. And I keep going back.

The company was founded in 2007 by Jammet and two Georgetown classmates (Nathaniel Ru and Jonathan Neman) with the bootstrap spirit of a young Internet startup. Using $10,000 raised by family — Jammet’s parents operated the fine Paris-does-Manhattan outpost La Caravelle until it closed in 2004 — and another $300,000 from friends and business associates (“mostly small checks”), the enterprising trio opened near their campus, adding two more Maryland/D.C. locations by 2009. It wasn’t always easy. “When we opened our doors there was no business,” says Jammet hunching over a laptop in the stadium seating at his Manhattan location. The bleachers we’re sitting on came from a Connecticut high school and can be converted into a stage that has hosted bands U.S. Royalty and Midnight Magic for in-store concerts.

Unlike most chains of their size, the company has no central commissary kitchen, with everything from raw beets, warm grains, agave Dijon dressing and roasted sweet potatoes being washed, trimmed and prepared on-site by a large kitchen staff.

Jammet tells a story about the opening of his Dupont Circle location, which was situated on a then-deserted block (read: cheap rent), located across from a much busier stretch (read: smart move). The fix? “We went to Guitar Center and bought a huge amp,” he says, smiling. “One of my partners is a DJ and he started playing music, sampling food and introducing people to the brand each weekend. We played a lot Daft Punk. A lot of bangers. And little by little people started coming back.” And they haven’t really stopped coming back, with the chain now swelling to 22 locations dotting Washington, D.C., Maryland, Virginia, Philadelphia, Boston, and New York City — where a Tribeca location is planned for summer, along with three others in the Northeast. A block party the company hosted at the Dupont location has grown into a fairly massive annual festival called Sweetlife, featuring headliners such as Phoenix, Passion Pit and A$SAP Rocky, and attracting thousands.

Sweetgreen’s meteoric rise has also caught the ear of Wall Street and in December the company secured $22 million in funding from Revolution Growth, the investment fund founded by Steve Case and Ted Leonsis. Jammet, who uses boardroom jargon like “scalable” and “core values” to describe the company’s business model, stresses that the cash infusion doesn’t change what their doing, but instead “gives us fuel in the tank keep doing it.”

Techcrunch writer Ryan Lawler sees it slightly differently, noting in a story that the company’s new investors are positioning to become the “Starbucks or Chipotle of salads.” “Thanks to a generational shift to people who eat out more but are more conscious of what they eat, as well as better information available about their meals due to regulations about calorie listings and the like, Case believes that consumers are overall making better decisions now,” he writes. 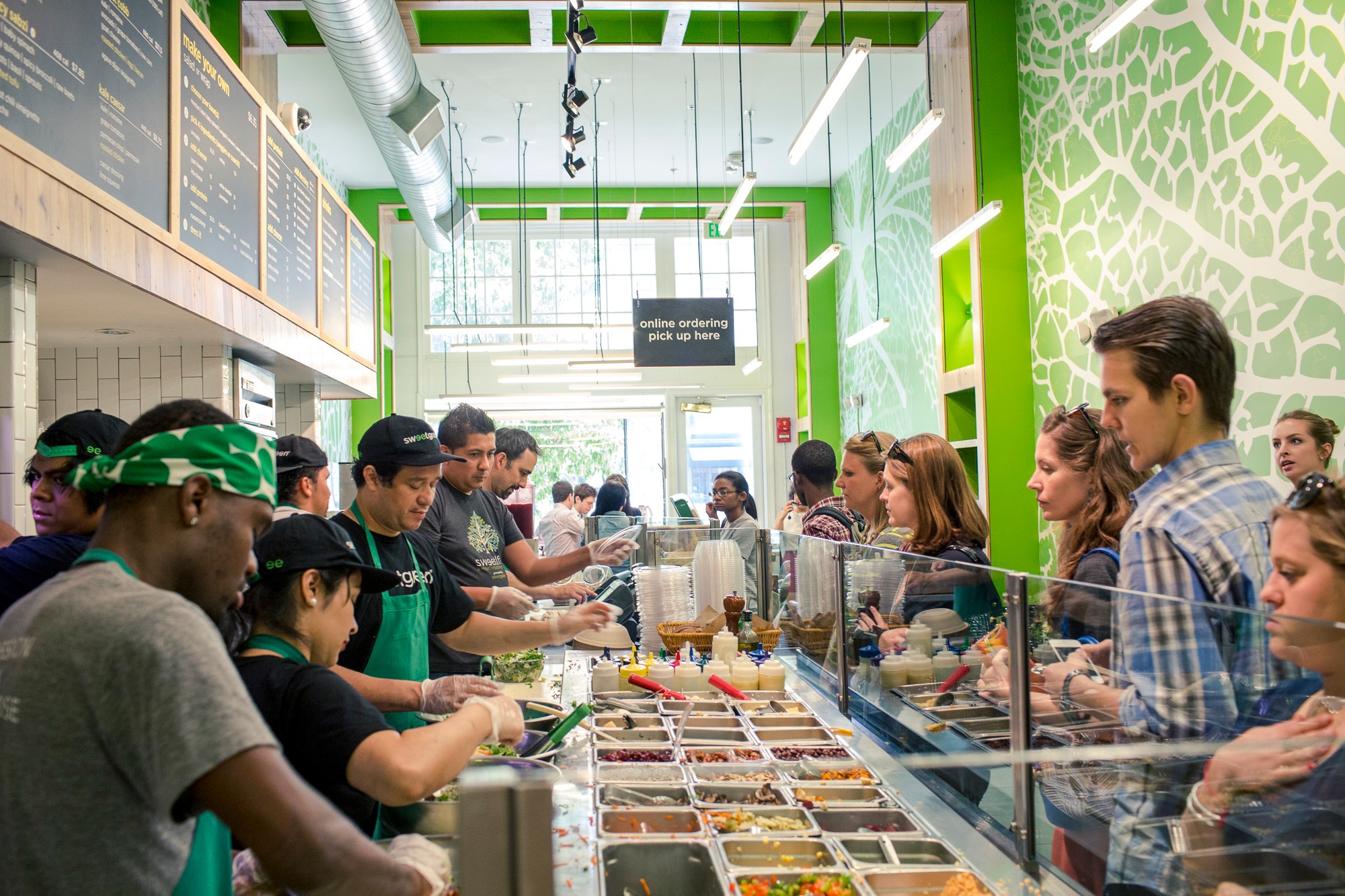 A Sweetgreen branch in Bethesda, Maryland.

This leads to the most important aspect of this story. Not the shrewd marketing of modern tastes (tapping le zeitgeist) or a Pitchfork-approved store soundtrack. There’s some steak to all the sizzle. Well, air-roasted cauliflower steaks at least.

It’s the food — mostly salad, but sometimes the juice and Asian-style tart yogurt — that has me queuing up a couple times a month. It’s three times a week for our 23-year-old associate editor George, who cannot get enough of the chain’s now-famous Guacamole Greens, mixed with mesclun, grape tomatoes, well-seasoned roasted chicken, ripe avocado and Mexican-leaning vinaigrette with a burst of fresh lime juice squeezed fresh right before your eyes by a smiling assembly line of workers the company calls teammates — with captains, trainers and head coaches filling out the squad. Or maybe it’s not just the food, will all the pretty little things waiting in line with their Equipment blouses and well-edited blazers. But you would have to ask George.

I’m more partial to custom salad called the Chic-P (pronounced “sheek-pea”), a handful of baby spinach tossed with baked falafel, toasted pita chips, chickpeas and a lemon-tahini dressing. It’s a smart instance of texture and acidity subbing for fat — and the 548-calorie salad, which the three founders conceived in their campus apartment, has been on the menu since day one. “We like to keep things as raw as possible, and not just for nutritional value. The bottom line is that raw broccoli is just so much more delicious,” says Jammet while a Junior Senior song plays in the background.

To emphasize the ethic that the founder describes as “traceable,” all restaurants are equipped with a chalkboard listing farmers and producers.

By stressing untouched produce, the success of Sweetgreen begins and ends with the ingredients they prep each day. Ingredients the founder calls “true and honest food that is traceable.” Unlike most chains of their size, the company has no central commissary kitchen, with everything from raw beets, warm grains, agave Dijon dressing and roasted sweet potatoes being washed, trimmed and prepared on-site by a large kitchen staff.

There is no butter used in any of the restaurants. Period. And while Sweetgreen can be hardly classified as vegetarian restaurant (a number of the house salads feature meat — along with a healthy list for D.I.Y. salading), the plant-based diet is ingrained in the company’s ethos. From warm grain base to local, organic cheeses and roasted tofu.

To emphasize the ethic that the founder describes as “traceable,” all restaurants are equipped with a chalkboard listing farmers and producers. Last week while waiting in line at the NoMad location, I glanced at the board to see that the goat cheese was coming from Coach Dairy, the cilantro from Migliorelli Farm in the Hudson Valley and the garlicky kimchi (featured in the January salad) from NYC-based Kimchee Pride. As for the famous man with the kale? That would be John Ploch, president of Ploch Farms in Clifton, New Jersey.

“We go through a shitload of kale,” says Jammet with a laugh. “Thankfully, the farmers have caught on to it.” That would be the famous kale farmer as seen below.