Montrealers love their music. The city has more than 25 festivals dedicated to aural pleasures, not to mention innumerable shaggy-haired, singer-songwriter types with acoustic guitars strapped to the back of their Bixi bikes. The winter may bring an arctic chill, but also one of the best festivals of the year. On January 16, 2014, some 70,000 DJs and music fans will descend on the city’s riverfront for the 8th annual Igloofest, a three-week-long celebration of EDM and excess in negative 5 degree temperatures. And even if you miss the festival, the winter months are a pretty great time to visit Quebec — and to snag hot reservations. From Christian Faure’s revolutionary new patisserie to award-winning avant-garde dishes at Foodlab, here are six places to eat and drink incredibly well in Montreal this winter.

2. Big in Japan
What would Momofuku Ssam Bar be like if the menu were exclusively Japanese? The answer is Big in Japan, a fun, funky and enormously popular izakaya in Mont Royal. Take Montreal’s delightfully civilized Metro a few short stops from the waterfront, and join the casually hip crowd jamming to the Motown-heavy soundtrack in a sleek, wood-lined space. Crowd-pleasing dishes include the oversized moshi pan, Japanese pork buns and wonderfully tender toro with crisp shiso and toasted baguette slices. Portion sizes here are of the American persuasion: the “share” dishes, which in the winter might include a cast-iron pot filled with slow-roasted veal shoulder, mussels and udon, claim to serve 2-4, but could easily sustain a family of five. The restaurant also has a stylish, speakeasy-style cocktail den a few blocks away, so save room for liquid dessert. 3723 Boulevard Saint Laurent, 514-847-2222, biginjapan.ca

3. Foodlab
If you see a five-story, LED lights display on the side of an industrial building on Mont Royal’s main drag, you’ve come to the right place. Located on the top floor of a digital arts museum, Foodlab is epicurean experiment done right. The name may bring to mind overwrought, self-purportedly “molecular” menu theatrics, but fear not. The experimental nature of the restaurant lies in its concept, which changes every two weeks. Co-chefs Michelle Marek and Seth Gabrielse, both formerly of Montreal’s Laloux, circle the globe each fortnight, with temporary menus highlighting everything from Spanish tapas to Sardinian seafood to hearty Israeli dishes. Reserve at least a week in advance to nab a table near the floor-to-ceiling windows, which overlook a snowy terrace and the Saint Lawrence River in the distance. 1201 Boulevard Saint-Laurent, 514-844-2033, sat.qc.ca/en/laboculinaire 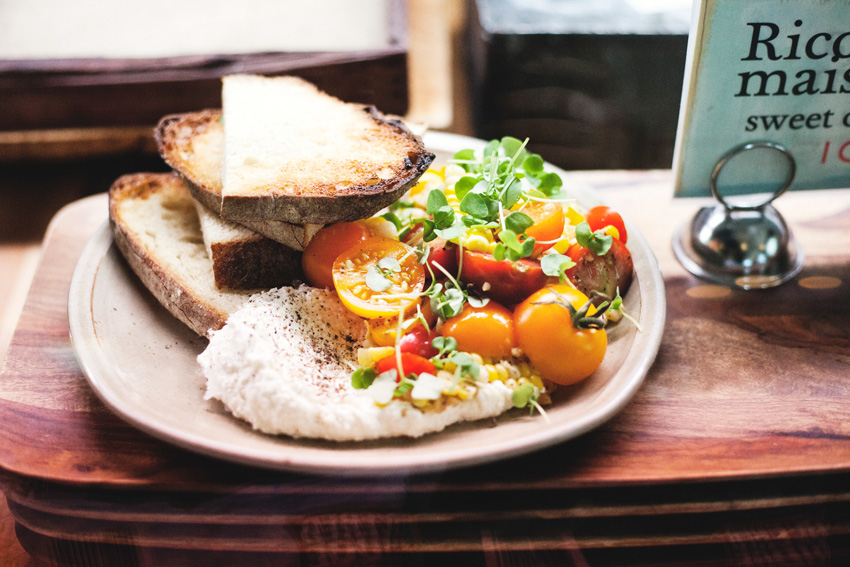 4. Olive et Gourmando
Named for the owners’ two cats, this welcoming café sits on a sunny corner of Old Montreal, a short walk from the riverfront. Don’t show up too hungry, as there will be an inevitable wait for one of the inviting, warmly lit tables. But, once you’re situated, settle in for stellar café classics like goat cheese panino, mac and cheese with truffle tapenade, and hearty winter salads made with pureed roasted squash, bitter greens and candied pecans. Save room for the epic chocolate brownie, which is a local legend on par with Quebec native William Shatner. 351 Rue Saint Paul Ouest, 514-350-1083, oliveetgourmando.com

5. Lawrence
Any visit to Montreal must include a stop at Mile End, home of charmingly sunlit coffee bars, high-end design boutiques and historic bagel shops. London-born chef Marc Cohen, who also helms the kitchen at hipster haven The Sparrow, keeps things swinging at the boho-chic Lawrence. His menu speaks gastropubbery with a French accent, as in roasted cauliflower soup with a touch of blue cheese, seared Arctic char with horseradish cream, and decadent grilled duck hearts (just go with it) alongside a delicately dressed celeriac salad. Come for the popular weekend brunch, where stylishly disheveled artist-types and the people who dress like them tuck into chocolate and lemon beignes, smoked trout with scrambled eggs and glass after glass of Aperol spritz. 5201 Boulevard Saint Laurent, 514-503-1070, lawrencerestaurant.com

6. Joe Beef
No guide to Montreal’s cold-weather cuisine would be complete without Joe Beef. Chef-owners David MacMillan and Frédéric Morin put the once-industrial neighborhood of Little Burgundy on the culinary map, serving an innovative menu that takes the local natural bounty to 11. The taxidermy bear head (not a typo) over the bar and checkered napkins on the tightly confined dining room tables may suggest Canadian Country Cookin’, but the protein-rich, proudly Quebecois menu is incredibly sophisticated. The big flavors and bigger portions never overwhelm the complexity of the preparation, which elevate protein-heavy mains like enormous steaks, pastas studded with lobster ad foie gras on top of more foie gras into pretty transcendent fare. Reservations can be hard to come by, so call early and call often. 2491 Rue Notre-Dame Ouest, 514-935-6504, joebeef.ca