Like many top toques, chef Shaun Hergatt has a strong love for eggs. "I'm very involved with eggs," he says. "I basically design a lot of things around them. They're the heart of life, you know?" At Juni, Hergatt's newly opened restaurant within Midtown's Hotel Chandler, the Australian-born chef points out the restaurant's place mats, based off speckled eggs, before going on to divulge his own collection of decorative egg-like objects. "I've taken eggs from all around the world from Canada, Scandinavia… Some are made out of stone. Some are made out of clay, wood. I live amongst them," he laughs.

But nowhere is Hergatt's passion for the egg more visible than his menu's current Feather Ridge Farm Egg appetizer, a modestly named dish that gives a namecheck to its source, but one that couldn't be less basic-looking. After slow-cooking his star ingredient in a circulator, Hergatt layers on a textural tableau of embellishments, including salted popcorn tuile, truffle-infused maltodextrin, and painstakingly peeled individual corn kernels. Because nothing's too good for Chef Hergatt's eggs.

See the breakdown below. 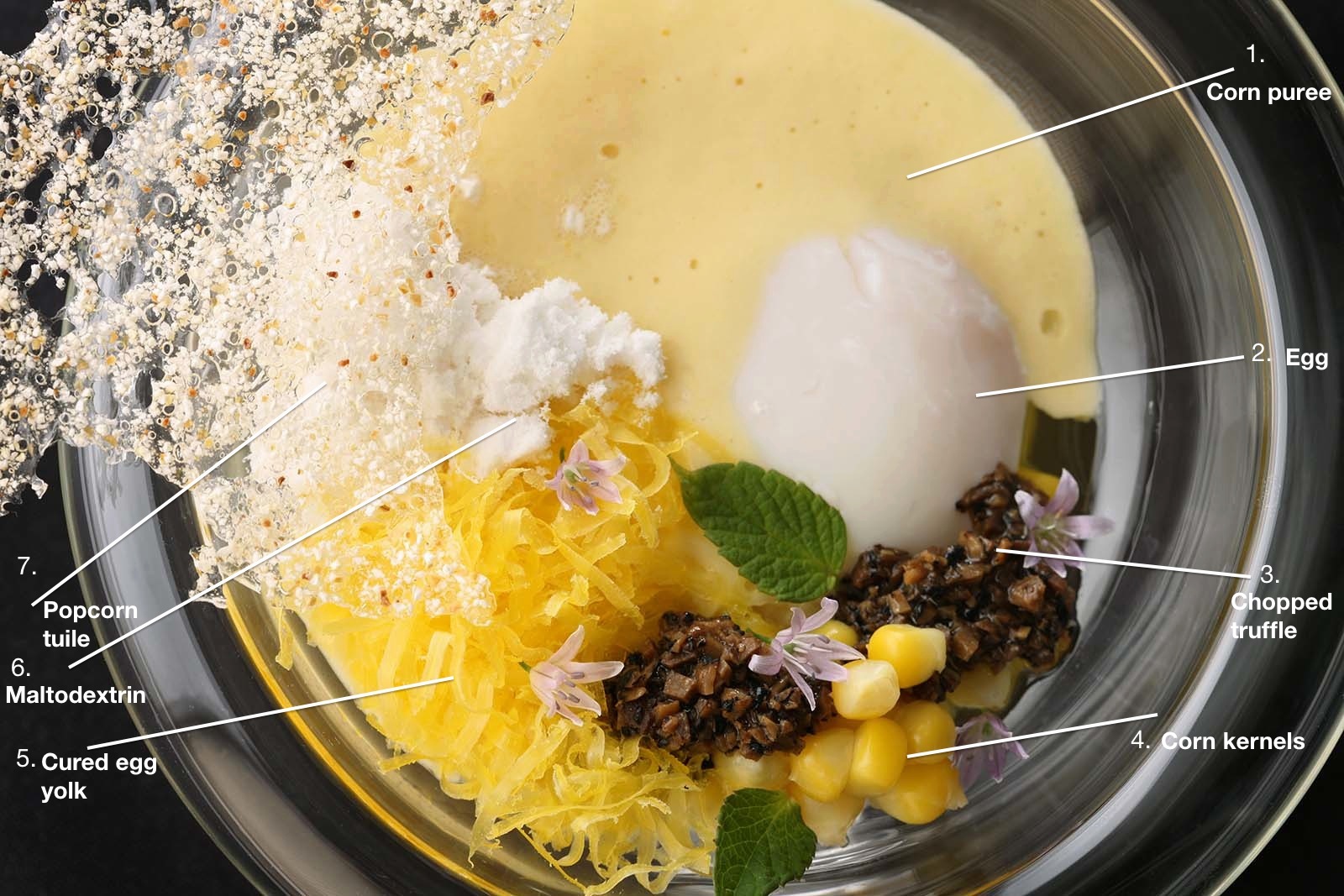 1. Corn purée | The most straightforward component of the dish, seasoned with sugar and salt.

2. Egg | "We get a circulator to 64.5 degrees, drop the egg in for about 30 minutes, and cook it in the shell. Then we crack it open into a bowl. Then what we do is put a corn espuma on top. We take a CO2 gun, and we basically put a corn soup inside. And then we aerate, and put the gun over the egg and let the espuma flow over the egg."

4. Peeled corn kernels | "We peel the corn kernels. We take the skin off of them. It takes about a couple of hours to peel an entire ear, but it gives texture and it enhances the flavor of the corn. When you peel it, it just has a very, very soft — like a baby vegetable — texture."

5. Cured egg yolk | "We cure the egg with salt and sugar for 48 hours, and then we dehydrate it, and then we grate it with a microplane, just like cheese. It kind of tastes like salty, eggy, cheesy stuff."

6. Maltodextrin | "It's a derivative of the cassava plant. We flavor it with truffle oil — it stays fluffy, but it sucks up the oil. It's aesthetic, it adds to the flavor profile, I think it looks cool…I think it adds a lot of dynamics to the dish."

7. Salted popcorn tuile | "We melt three derivatives of sugar, and then we put popcorn on top with a little bit of salt. It has a very strong connection with the corn, but it's a spin-off that's very American. And it gives it a little bit of smoky nuttiness."