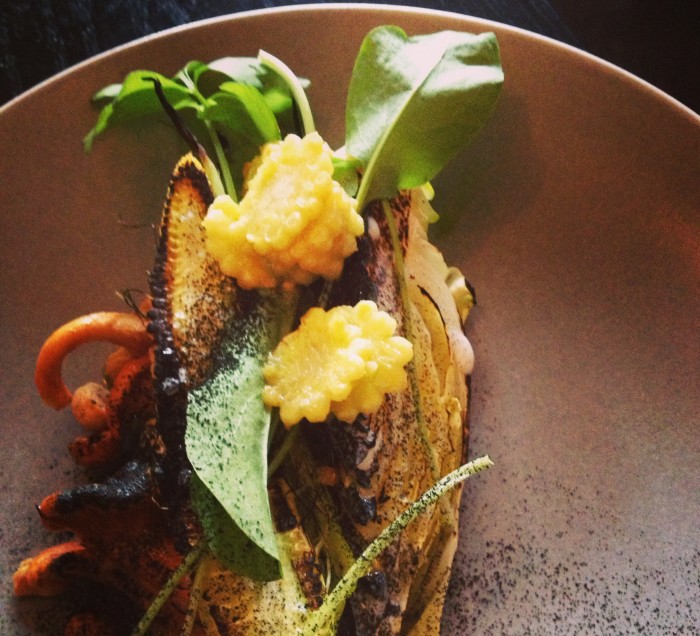 Contributing Editor Matt Rodbard just returned from a trip to Copenhagen, his second in as many years, and was once again floored by the food scene, including restaurants, cafes, markets, cocktail lounges, coffee shops, spice shops, craft beer distillers and dudes selling hot dogs out of carts. The best hot dogs you will ever eat. Sorry, Chicago. Here is a highlight.

The New Nordic cooking movement that has swept through America like a runaway Volvo doesn’t seem to be slowing down anytime soon. In October, New York City plays host to an ambitious festival highlighting the culinary culture of various Scandinavian countries. North Nordic Food Festival (October 2-7) features cooking demonstrations, lectures and dinners from a roster of talent visiting from Sweden, Denmark, Finland, Iceland and Norway, as well as those based in New York City. Participating chefs include Daniel Burns (Luksus), Marcus Jernmark (Aquavit), Carl Kristian Frederiksen (Aamanns-Copenhagen) and Fredrik Berselius (Aska), to name a few.

I just returned from a trip to Copenhagen, my second in as many years, and was once again floored by the food scene, including restaurants, cafes, markets, cocktail lounges, coffee shops, spice shops, craft beer brewers and dudes selling hot dogs out of carts. These are the best hot dogs you will ever eat. Sorry, Chicago.

After returning last time I wrote a story, 10 Places To Eat And Drink In Copenhagen If You Can’t Get Into Noma — a reference to the influential Christianshavn restaurant run by René Redzepi that is often called the Best Restaurant In The World. In the three short days that I visited the city this time around, the list has grown to 20 spots (an update is forthcoming), with one of the big highlights being a brisk Friday night dinner at Aamanns Etablissement, located a short walk from the University of Copenhagen.

The Aamanns in the name is for Danish chef Adam Aamanns, a master of the smørrebrød. Known as the national sandwich of Denmark and served open-faced with well-salted rye bread and topped with pickled seafood and seasonal vegetables, Aamanns has become famous for his modern constructions and deft knifework. In 2009 he opened Establissement, a casual seated smørrebrød café by day that shifts to small-plates bistro at night.

It was there where I had a very special moment with vegetables. Like in many parts of the United States, sweet corn has a limited run in Denmark (roughly a two month window between late-July and September). So, appropriately, this very special moment with vegetables (VSMWV) was built around a single husk of adolescent corn (not baby, not full-grown, you get the point). The corn was prepared two ways: Shaved raw into slivers and scorched in its own pre-pubescent husk. All of this was candy-sweet and completely edible. Even the tough root of the stalk.

The second key component of the VSMWV — cabbage — was charred over a flame a few seconds on each side. Adding a bit of texture and earthiness were pickled chanterelle mushrooms and a light mayonnaise made from the same fungi. Creamy and a perfect compliment to the corn not unlike the crema in Mexican elote. A scattering of toasted hazelnuts, sorel and lovage were decorative flourishes, adding cruch and freshness.

And the jet-black powder on top? That would be hay ash, which added some contrasting bitterness. Cooking with the vestiges of combustion is a bit of a New Nordic go-to. A popular restaurant in New York even has it in the name. And while smears and swirls of ash can easily be chuckled at, it served a purpose in the VSMWV. And just one of the reasons we licked that hand-potted earthenware clean.

More about the food and drink in Denmark on Food Republic: