“This dish is based on the basic idea of the Spanish-Portuguese ‘Holy Trinity’ of pork, shellfish and potatoes,” explains Fitler Dining Room’s executive chef Robert Marzinsky. “The combination of ingredients can be imagined as paella without the rice — which is essentially an oxymoron, considering paella is all about the rice.”

Though the 35-seat bistro, which opens for business this week near Philadelphia’s Rittenhouse Square Park, is mostly putting out a small selection of Americanized bistro classics, what could be more American than going rogue every once in a while? The newcomer’s pork tenderloin and belly entree is definitely a standout on the menu, not just for its Spanish-rooted flavors, but also its stunning plate. Here we have an amazingly detailed feast for the eyes — with an incredible amount of thought behind every component. The pork might be the backbone of the dish, but even the nasturtium petals have a crucial role on the plate.

Marzinsky, whose last kitchen stint included the opening of Stateside (recently named Philadelphia magazine’s “#1 Best New Restaurant), breaks it all down, below. 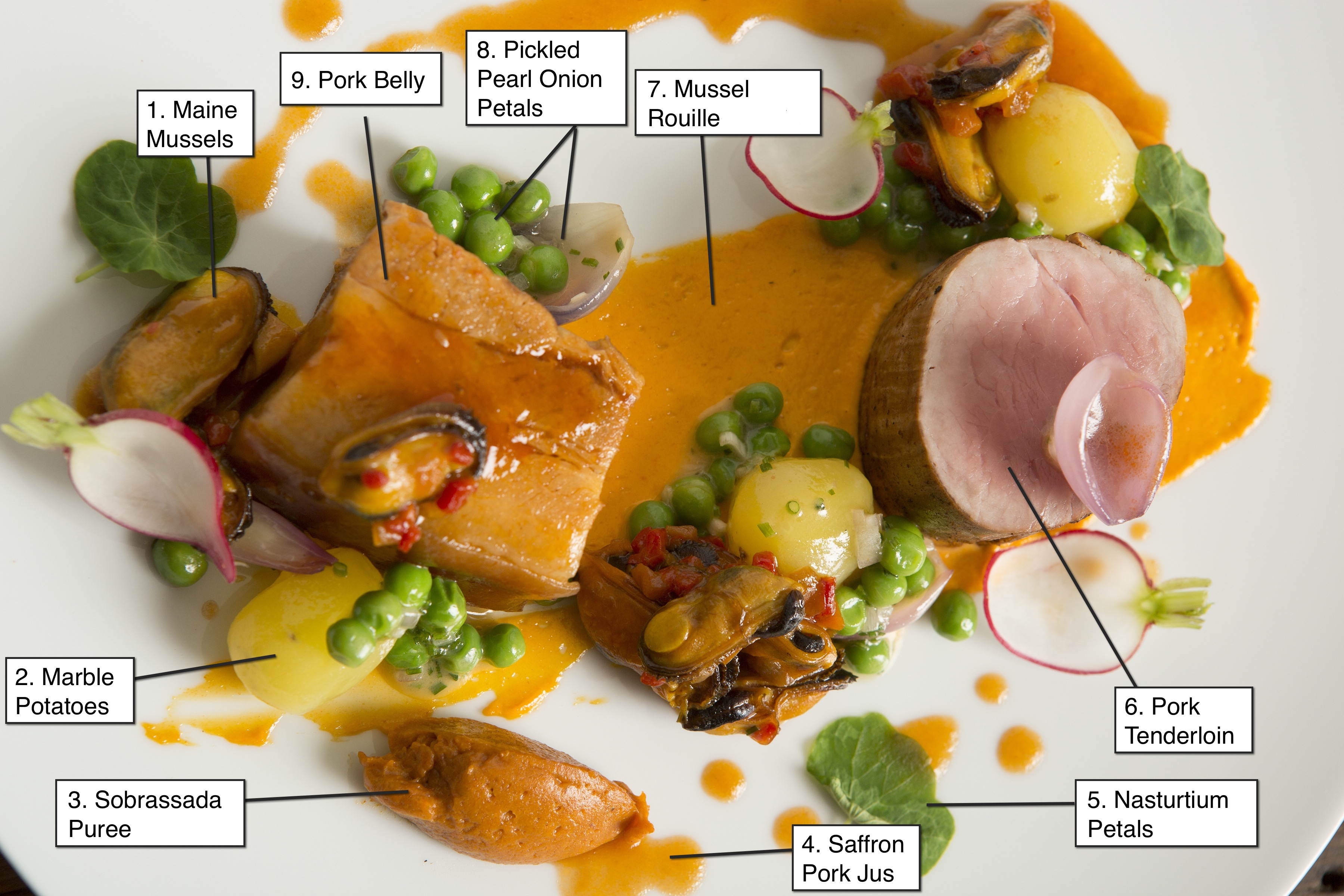 1.  Maine Mussels: “Maine mussels have great flavor — slightly sweet and briny. We cook them to just barely opened in wine with saffron and garlic. Once they open, we pick them, strain the liquid and reduce it with olive oil to create a nice marinade to hold them in.” The mussels are then warmed in a saucepan with their juice, soffritto (onion, carrot, fennel, and tomato that have been stewed in olive oil for around 6 hours), with some lemon juice or sherry vinegar for a “counterbalance of acidity.”

2. Glazed Marble Potatoes: “Baby potatoes similar to fingerlings, but marble-sized as the name suggests. They’re cooked in the braising liquid from the belly with some sugar and salt.”

3. Sobrassada Puree: A freshly cured pork and paprika sausage that’s cooked at a low temperature and pureed into a smooth paste. “It offers up a condensed pork funk.”

4. Saffron Pork Jus: A light reduction from the belly’s braising liquids, infused with saffron threads for color and flavor.

5. Nasturtium Petals: “One of my favorite edible leaves — a good pungent, peppery mix of lemony arugula, cracked pepper, and cooling mint. It’s a nice counterpoint that works well with briny shellfish and the funk of the pork.”

7. Mussel Rouille: “Rouille [a mixture of olive oil, breadcrumbs, garlic and saffron] is the traditional garnish for bouillabaise. We thought it would be a bright way to visually offset the green of the peas, as well as a logical flavor component to resonate with the shellfish and potato.”

9. Pork Belly: “Cured, roasted and braised — this is the backbone of the dish.”