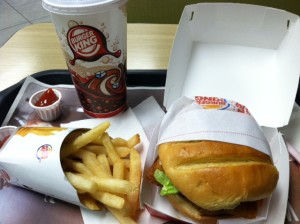 After I ordered my fish sandwich, I noticed the bored teenager in the back taking these lifeless symmetrical chunks of frozen foodstuff out of a bag and dropping them in a fryer. It wasn’t a good start. But when I opened up my box, I was sincerely impressed by the presentation. Burger King brings their A-game to the fish fillet market. Just look at that bun! It’s huge. It’s the Shaquille O’Neil of fish fillets. The top is so intently designed, that it brims with bread simulacrum. But what is it simulating? It looks like it’s a signifier for the plastic foods you see in preschool. When I bite into it, I almost gag—it has the same spongy quality of McDonald’s, but it’s three inches thicker. There’s so much bread, even the admittedly bigger fish gets lost in there. And the taste? Well, there’s no fish taste at all. Where the other franchises appear to have added Fish Taste Number 436, Burger King seems to have sucked it all out. But the tartar sauce is the worst part of the experience: it’s not like any sauce I’ve ever seen or tasted, which means it could be any of a variety if lubrications you might dream up. (Ewww!) The fish may look the part — it certainly wins this beauty pageant — but the whole experience feels fake, like it was generated by Pixar. Star rating (out of 5): 2 | Price: $6.41 (for the meal)

For sure, this was a very unfair and unscientific test. For one thing, the cumulative effect of eating at three fast food joints in a row left my vision blurry and my muscles twitching by the time I made it to Burger King. I was severely compromised, and all I can say is I now have a deep appreciation for the sacrifices Morgan Spurlock made for all of us in Super Size Me.

And, yes, I reveal these results with a heavy heart. Because, as mentioned, I grew up at McDonald’s. No, not really, but McDonald’s was the most important home away from home I had as a child. I recall one of my happiest achievement as a nine-year-old was the day my brother and I managed to go to McDonald’s four times in one day.

Goodbye to all that. Now, I will forever pledge allegiance to the little retro redhead with pigtails. What a shame then, that she’ll only be serving fish sandwiches for a couple more weeks. If anyone wants to start a petition to get Wendy’s to serve their fish sandwiches year-round, I’ll be happy to join the cause.