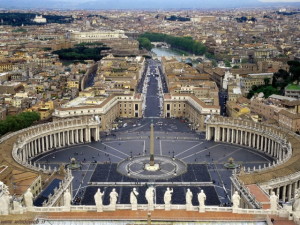 That cardinal was Edoardo Pacelli (one of his grandsons became famous recently for two very admirable achievements: winning Big Brother’s Italian edition and reaching an I.Q. of -27) and shortly after the invention of this insane dish he became Pope Pius XII (Papa Pio XII). So they decided to call this fat-infused first course FETTUCCINE ALLA PAPALINA, fettuccine pope-style. You won’t find it in any Roman restaurants, possibly because Pope Pius XII became infamous for being an ally of Nazi Germany during WWII or maybe because, despite the intentions of the chef to make a more angelic dish, it is far too heavy to be commercialized. I tried it anyway just to give you (and myself…) a taste from the past. Even though I did use soy cream to make it lighter, I can confirm it: it’s heavy stuff.

That’s all for now. Come back soon for more of Baba’s Eat Ali.