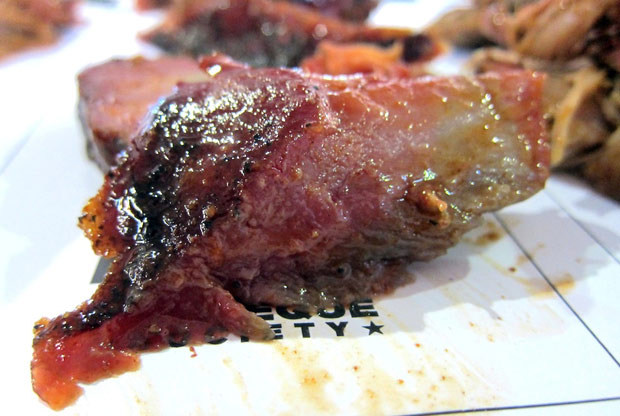 Barbecue. Or Bar-B-Q. Or BBQ. Few foods can inspire conversation and controversy like meat that has been cooked using the heat and smoke of a fire. Heck, not only can’t we decide on how to spell the word, we don’t even agree whether it’s a noun or a verb.

Some ‘cue aficionados believe that barbecue refers to the actual product of the process. To these fans, barbecue can be pork, beef, chicken or even mutton. But odds are it probably involves a pig. Others believe that barbecue is an action verb that refers to the simple act of cooking a hamburger on a grill. We shall not speak of these people again—cooking on a grill is called grilling. Introducing the sweet embrace of smoke to caress and flavor meat as it breaks down the proteins through the slow application of heat is called barbecue.

Barbecue backers break down into many different camps based on:

1. The fuel source used (yes, you can make damn fine barbecue using gas).
2. The type of meat to be smoked.
3. The use of whole animal versus parts.
4. Whether your meat should be chopped, pulled or sliced.
5. And especially, what sort of sauce should be applied to the meat after cooking is completed—if saucing is even in the cards.

Generally, these conventions tend to break down into regional preference with some very discrete divisions even within one state. For example, don’t try to lump all North Carolina barbecue into one category unless you’re itchin’ for a fight.

This year, Food Republic will explore the regional differences that make barbecue such a uniquely American institution—particularly in the Southern states. We’ll share why experienced pitmasters all believe that their way is the right way and introduce you to some of the archetypical joints to sample the best that each faction has to offer.

We’ll also meet the master purveyors of the profession and get their take on their particular style, and what makes their barbecue so special. Some of these pitmasters are already well known from cooking shows and other media like Mike “The Legend” Mills of 17th Street Bar & Grill in Murphysboro, IL and Chris Lily of Big Bob Gibson BBQ in Decatur, AL. Others are known for their particular specialty like the whole hog from Pat Martin of Martin’s Bar-B-Que Joint or the smokey mutton from Moonlite Bar-B-Q Inn’s Pat Bosley.

We’ll discuss why fans of tomato-based sauces are considered wussies by members of the mustard and vinegar camps and how competition barbecue judges are trying to push the world toward sweet and spicy tomato sauces. Speaking of competition cooking, over the course of the year we’ll take readers behind the scenes at big events like the Memphis in May World Championships and the Jack Daniel World Championship Invitational. Apparently, the world of barbecue is so huge, they need more than one world championship. Manhattan’s annual Big Apple Barbecue Block Party has become a summer staple event for 100,000 barbecue fans, proving that the allure of delicious smoked meat extends above the Mason/Dixon line.

We’ll also examine the business side of the barbecue world as Mike and Amy Mills teach current and prospective restaurant owners the tricks of whole hog cooking and barbecue marketing as part of their BBQ MBA program. You will find out what it’s like to take a barbecue judging class—and what is expected of those who sit in judgment. Here’s a hint—if you take a single bite of every item presented to you in a normal KCBS competition judging, you can expect to consume at least two lbs. of meat.

Finally, the Southern Foodways Alliance has declared that Southern barbecue will be the theme for their studies and celebrations in 2012, including a July field trip to the barbecue hotbed of eastern North Carolina.

So as you can see that there’s a lot going on in the world of ‘cue. Pop a Pepcid and come along for the trip!