“This is what will happen: I am going to get rice glue,” I said to myself as I unpacked the Black and Decker Rice and Risotto cooker ($69.99). “The upside is that I can use it as spackle to finally accomplish some of those minor home improvements. Patch a few holes, maybe hang some wallpaper – it’ll be grand!”

Generally speaking, the multicooker is a plague among us. (See our previous test of this multifunctional T-fal apparatus, for example.) We have 9-, 10-, 12-in-1 functions, endless accessory baskets, hyperspecialized features, steaming and braising and sautéing and warming and simmering and frying settings and now…risotto stirring. Is this it, folks? Have we reached peak laziness? Are we so broken of spirit and meager of pride that we’re now shoveling oversteamed string beans and rubbery chicken breasts out of nonstick inserts and into our mouths and calling it a meal? 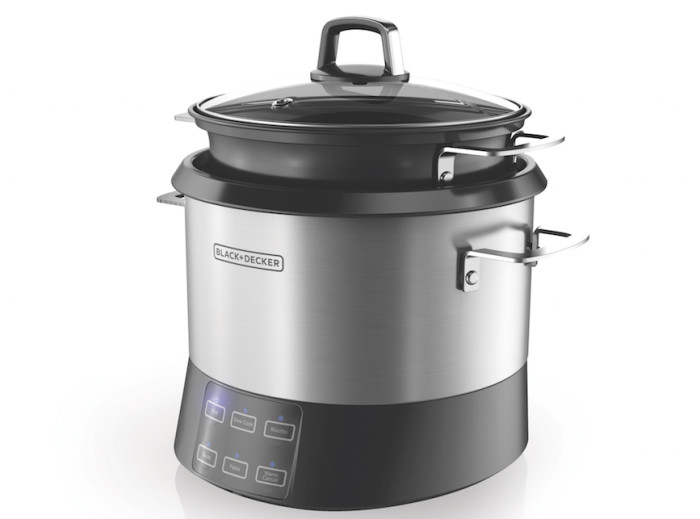 Black & Decker’s submission into the multicooker category is not unlike its competitors. Essentially a Crock-Pot with more gizmos, it includes a basket for draining and steaming, and all surfaces are nonstick and dishwasher-safe. It sautés, steams and slow-cooks any pasta, protein or vegetable of your choosing, automatically switching over to its “warming” setting when finished to make weeknight meals as effortless as possible. What distinguishes this multicooker from most others, however, is the detachable stirring arm and automatic stir function, which claims to make laborious dishes like risotto easy and breezy.

This device, like the dozens before it, is making lofty promises. Specifically, this multicooker challenges the high-maintenance nature of risotto, making this difficult dish more accessible for everyday home cooks. The problem, however, is that a proper risotto is about more than just moving rice around in a pan. Let’s get into it: Constant motion is important to ensure the grains cook evenly and eventually “break.” As liquid is added, the rice eventually reaches a breaking point and transforms from a thick, clumpy mixture into a saucy, loose final product. But stirring isn’t the only thing that creates this effect. The rice used, typically arborio or carnaroli, is short to medium grain and has a high starch content that retains moisture, all of which creates the risotto’s creamy texture. In order to properly cook these rices, liquid is absorbed in stages, creating rich, layers of flavor and slowly breaking down the grains before more is added. This is a very different technique than cooking longer grains like jasmine or basmati rice, for example, which require boiling in one fixed amount of liquid until soft. 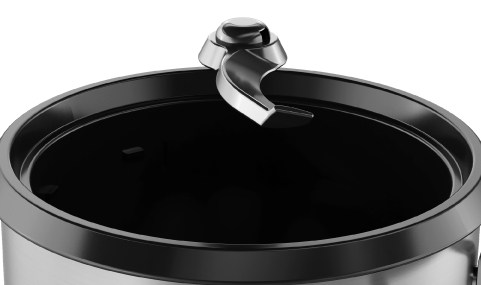 Black & Decker’s device may have the detachable stirring arm (shown above), but its suggested recipe calls for one mass addition of liquid that simmers until cooked through. Think about it: Why would it call for slow, progressive additions of stock? That negates that whole purpose of the slow-cooker, the set-it-and-forget-it method. If the cooker required the diligence of standing over the pot and dutifully pouring in stock in half-cup intervals every 5 to 10 minutes, then the device is really offering nothing.

Great risotto, like great pasta, should be toothsome and full of texture. It should spread out on the plate when served, saucy and soft. It should not be sticky or gummy, like pilaf held together with lots of cheese. My first attempt did not result in glue, as I initially suspected, but the rice was indeed mushy. It did have a surprisingly deep flavor, I suspect because the compact cooking area and steady temperature forced an intensification of flavors. (Or it could have been the homemade stock I used.)

First, I used the sauté feature to caramelize the onion and garlic, then added the rice for a light toasting before switching over to the risotto setting. The arm started making clockwise circles in the pot, as promised. However, it wasn’t really stirring so much as collecting all the rice behind the arm and pushing it around in one mass. Once I added the full amount of stock, the arm had more material to work with and started actually “stirring.” I seasoned the rice, put the lid on and walked away. About 15 minutes into the cycle, I cheated and stirred the risotto with a wooden spoon (I couldn’t help myself), but it didn’t have much effect. I suspect the damage was already done — the rice was well on its way to being overcooked.

For my second attempt, I replicated the process but reduced the amount of stock. Since no moisture is evaporating, perhaps less initial liquid would prevent the gumminess? I reduced the stock by almost a full cup — a risky move, but limits demand testing. As a result, the rice had more integrity. Each grain was clearly defined and individual instead of blurring together in one gloppy mess, but it was still overcooked and lacked an al dente bite. It was also less saucy, which was to be expected, but unfortunately the reduction in liquid didn’t affect the overall texture of the rice itself. In neither attempt did the risotto spread onto the plate.

The other features are perfectly acceptable. In the capacities of sautéing, steaming and boiling pasta, the pot is a handy helper because it takes all the guesswork out of temperature control. I wish those temperatures were listed in the manual, though, particularly with the slow-cook feature. Most standard crock pots will advise what their low and high settings are since cooking at 185 and 250 degrees Fahrenheit are vastly different. In order to accommodate the stirring arm, the cooking basin has a quarter-sized knob in the center of the bowl where the arm attaches. This interruption in the cooking surface is a bit annoying since the residue of whatever you’re cooking tends to accumulate around those edges.

As for the arm itself, I am not convinced of its efficacy. An old-fashioned popcorn maker proposes the same thesis: The hand-crank-operated arm jostles the kernels inside the bucket to keep them from burning. In that scenario, however, the wand inside is much larger, and the user has more immediate control over the process. With the multicooker, the arm feels like a decent idea that hasn’t been fully figured out. Maybe it would be more successful if the arm were bigger, or if there were a way to control its motion inside the pot. But with each new level of customization, we veer closer to just using a pot, wooden spoon and the arms attached to our bodies.

Like all products that claim to do everything for home cooks, Black & Decker’s device is probably a good buy for a novice in the kitchen with limited time and space. It is absolutely better than ordering takeout for every meal, and if it inspires one to actually cook, it is worth every one of its 70 dollars. But it is not a replacement for proper technique. I ended up with 12 cups of subpar risotto, but it was far from a waste. I made a big glorious plate of arancini, because I can’t think of any dish, no matter how far gone from the ideal, that isn’t made substantially better by being stuffed with cheese, deep-fried and served with booze.

The Black and Decker Rice and Risotto cooker is priced at $69.99 and available via Amazon.com.