To illustrate the current realities of traveling to once-forbidden Cuba, John Kavulich likes to use a food metaphor. “In December, when President Obama made the announcement [loosening restrictions on Cuba-bound U.S. travelers], people were celebrating by pouring champagne,” says Kavulich, a senior policy advisor to the nonprofit U.S.-Cuba Trade and Economic Council. “My response was, this is pouring molasses. It’s still drinkable. It still has viscosity. It still moves. But it’s slooooow. And that’s what this is.”

To put it another way, it’s easier now for regular Americans to visit the Communist-ruled Caribbean island than it’s been in quite some time. But that doesn’t mean it’s necessarily easy. You can’t just book online and hop aboard the next flight to Havana. The major U.S.-based airlines won’t take you there. Not yet, anyway. There are proper protocols to follow, and legal transportation routes are currently limited. And as you’ll probably notice when you finally arrive, the place isn’t exactly set up with American tourists in mind. “If two Carnival cruise-line vessels, with 2,000 people each, arrive at 10 a.m. at the Port of Havana, the tourism infrastructure doesn’t have the vans, the buses, the taxis, and it doesn’t have the restaurants to feed all these people,” says Kavulich.

The Bahamas it’s not. Which probably means that right now is the right time to go — before the rest of America ruins it. Here’s what you need to know:

Don’t Be a Tourist
“You still are not allowed to go down to Cuba, sit your ass on the beach, smoking a cigar and sucking down a Cuba Libre,” says Kavulich. Or if you do, you should also be taking notes on tidal patterns or calculating the country’s consumer price index — not just soaking up sun and scenery. You see, unlike traveling to the Bahamas, the Caymans or other Caribbean islands, the U.S. government requires that you come to Cuba under the pretense of some higher purpose. “Tourism,” as we know it, remains technically illegal. There are, however, 12 qualifying categories that would legally justify your presence. “Professional research” is one. Educational, humanitarian, journalistic and religious activities are also included. “People-to-people travel” is another option. This means you’re part of an organized tour group, with a rigorous itinerary of visits to historic places and orchestrated interactions with locals.

In the past, the U.S. Treasury Department would have to certify that your stated purpose is legit and grant you a license before you take off, a process that used to take months. Under the current regs, you basically check a box and sign an affidavit. Have a great flight, um, Professor? Just be sure to hang on to your receipts. By law, you’re required to keep documentation of your transactions for a period of five years. You may also be required to keep a full-time schedule of activities related to your specified category. Uncle Sam doesn’t want you wasting a single moment of cultural enlightenment on silly things like free time. 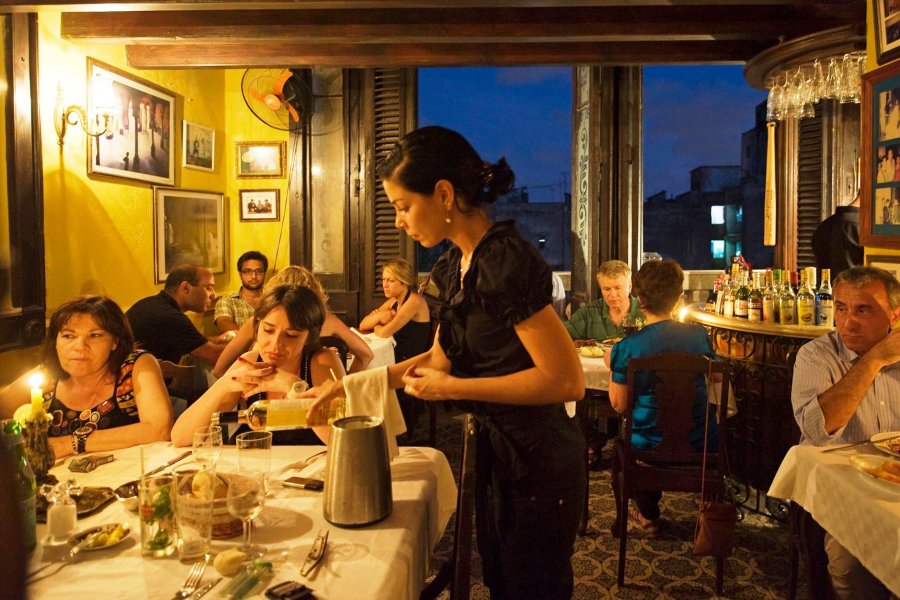 La Guarida is one of Havana’s best known paladares, where the food is generally better than the usual state-run restaurants. (Photo: La Guarida/Facebook)

Getting There
U.S.-based airlines are finally authorized to fly into Cuba’s José Martí International Airport under the new regulations. But while some carriers have expressed interest, it could be a year or longer before the logistics are worked out and those flights actually materialize. For now, you essentially have two options: You can take a charter flight, usually from Miami, through a U.S.-authorized travel agency like the venerable Marazul. (Another outfit, Cuba Travel Services, recently announced plans to start weekly flights from New York’s JFK Airport beginning in March.) Or you can do it the old-fashioned and formerly illegal way: by flying through Canada, Mexico or some other third-party country. Under the newly looser regs, you won’t even have to ask the Cuban customs agent to kindly keep his tell-tale stamp off your U.S. passport.

Where to Stay
Beyond that notorious, ultra-exclusive U.S.-run resort in Guantánamo Bay, most lodgings for out-of-towners in Cuba are operated by the Cuban government, which, in keeping with populist fashion, has been primarily focused on providing basic accomodations for the general public. The historic Hotel Nacional is perhaps the most gracious. A more contemporary option is the refurbished Hotel Saratoga in central Havana, a jointly run venture that even features modern amenities that we Americans generally take for granted, like Internet service. Cellular and Wi-Fi access has been notoriously spotty under Cuba’s state-run telecommunications monopoly, and American carriers don’t provide coverage.

Where to Eat
Havana has several famous restaurants. Some even hold a special place in cocktail lore: Floridita, for instance, where one prescient mixologist stuck a straw in the world’s first frozen daiquiri, and La Bodeguita del Medio in Old Havana, which is similarly credited with serving up the planet’s premier mojito. Naturally, both places claim to have been Ernest Hemingway’s preferred Cuban watering hole back in the day. Given Papa’s propensity for drink — he lived in Cuba during the late 1930s and has a rum-based drink named in his honor — they might both be right. Another well-known spot is El Aljibe, an outdoorsy hangout in Miramar known for its roast chicken and coconut ice cream. But the majority of these are state-run restaurants, which don’t exactly have a sterling reputation for food or service. You can find better fare at the smaller family-run paladares, located in private homes. The most popular is La Guarida, which famously served as the setting for the 1993 Oscar-nominated film Fresca y Chocolate and is situated atop an old palace. Specialties include an eggplant appetizer that mimics the texture of caviar and caimanero (local grouper).

What to Bring Back
The good news is, the old Bush Administration ban on Cuban goodies like rum and cigars is over, and the new regs allow U.S. travelers to return with up to $400 worth of souvenirs. The bad news: Booze and tobacco is limited to $100 total. (Using prices taken from a recent New York Post article, that’s roughly equivalent to five of Fidel Castro’s favorite Cohiba Lanceros, with change left over for a couple of bottles of comparatively cheap Havana Club rum.) On the bright side, that still leaves plenty of cash to spend on authentic Cuban straw hats.