Erik Anderson is a veteran of Nashville’s award-winning The Catbird Seat and Minneapolis’ Grand Café. Now he helms the kitchen as Executive Chef at San Francisco’s Coi, where he’s using an ancient varietal of citrus known as etrog. What is etrog? It’s typically used ceremonially during the Jewish festival of Sukkot, but doesn’t often show up in fine cuisine. We spoke to Anderson for the lowdown on this intriguing, zesty, rarely seen fruit.

When did you first encounter etrog?
At the Marin Farmers Market. It was a unique, odd-looking thing and I was just attracted to it. One of the first things I noticed when I moved to California, because I’m still pretty new here, was the variety of citrus available. It’s pretty amazing seeing ingredients you’ve never see before, buying them and taking them to the restaurant.

Is it like yuzu?
No, completely different, it’s really its own thing. It’s like the OG lemon, that was the first one.

Does it go by any other names we might recognize?
Etrog is also called citron, and it’s one of the three original citruses. The others are mandarin, which orange varietals are derived from, and the third is a type of lime called makrut, which is the original lime. I love it because there’s a great story behind it. I like food that you can have a conversation about.

How is the flavor different from lemon?
It’s more floral. To me a commercial lemon is borderline tasteless, like a commercial egg. When you taste a beautiful farm egg, you’re like “oh shit, this is what it’s supposed to taste like.” We go through a ton of eggs — my everyday egg is a Jidori hen egg. Then we source smaller farm eggs from smaller purveyors when we put yolks on the menu.

What’s your favorite part about cooking with etrog?
Etrog is fascinating to me because it smells like Buddha’s hand — and what the hell do you do with Buddha’s hand? You zest it, it’s all pith, much like etrog. It’s bitter, but the scent of it is absolutely phenomenal. It’s everything you want a commercial lemon to be, and it reminds me of limoncello. Me and my old partner Josh Habiger are really big fans of Amaro. Using etrog is inspired by him really, and our love for Amaro.

How do you serve it at Coi?
I thought instead of drinking Amaro after a last savory course like a digestif, what if you could eat it? We slice the etrog and compress it over and over in Amaro Meletti, so it really pulls in the amaro flavor into the fruit. It still has that bitterness, but it’s slightly sweet with herbal notes. We semi-freeze it, and serve it chilled over ice. 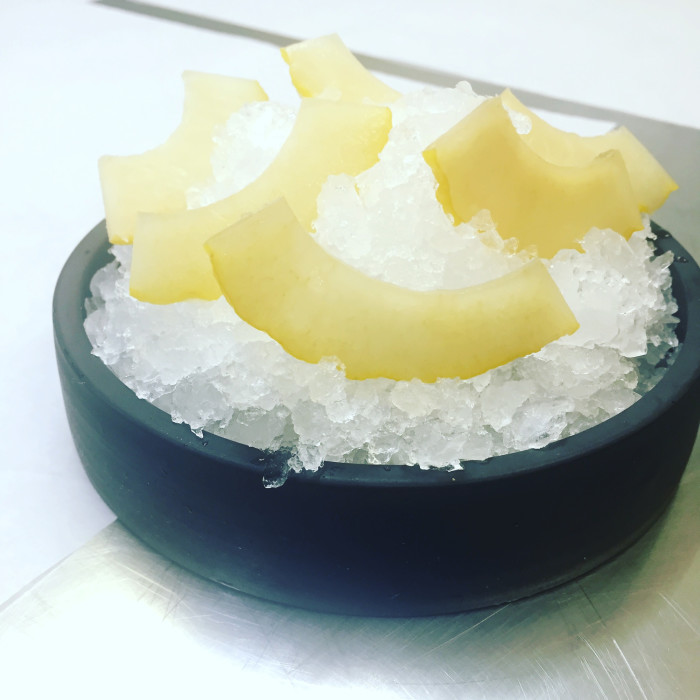 How’s the response been?
I think people are into it. It’s a small bite with an unexpected flavor. If you really like Amaro, you’re going to love it. If you’re not a fan of bitter, it might be slightly off-putting but I haven’t seen any come back uneaten.

If someone finds etrog at a farmers market, how do you recommend working with it for the first time?
To be perfectly honest, I still don’t really know! Compressing it was only thing I could think to do with etrog because it doesn’t contain much juice at all. The zest is incredible, though. You know what? Make your own etrog limoncello. Put the zest in some vodka and forget about it for a while. Or candy the peels.