There are so many more fish in the sea than we currently eat on a regular basis. And thanks to the powerhouse team of Chef Matthew Pietsch and award-winning cookbook author James O. Fraioli, you can learn all about them. Their recent release is an ode to the lesser-known species encountered when commercial fishing for fish market mainstays. Pick up a copy of your own and discover recipes, techniques and stories from the sea. The first lesson you’ll want to learn: what is bycatch, and why is it important?

Reprinted with permission from Sea Robins, Triggerfish & Other Overlooked Seafood

Fishermen use many kinds of gear and processes to catch the fish we eat. Here are some of the major methods used in commercial fishing, in which bycatch is also landed:

A gill net is a curtain of netting that hangs in the water suspended from floats. Gill nets are almost invisible to marine life and rely on this fact to catch fish. The spaces in the net are designed to be big enough for the head of a fish to go through, but not its body. As the fish startles and backs out, its gills get caught in the net. Although gill nets are intended to catch certain species of fish, this fishing practice can result in a large quantity of bycatch.

Thousands of hooks all fish at once when a long-liner rolls out the gear. The central fishing line can be fifty miles long and strung with many smaller lines holding baited hooks. After leaving the lines to “soak” for a time to attract fish, long-line fishermen return to haul in their catch. Pelagic long-lining takes place near the sea surface, targeting midwater fish like swordfish and tuna. Demersal or “bottom” long-lining targets fish that live closer to the seafloor, like cod, halibut, and sablefish. Similar to gill nets, long-lines are intended to catch certain species of fish, but incidental species may also end up on the line.

A purse seine is a large net that encircles a school of fish. The bottom of the net is strung with a line that the crew can pull closed. Small boats move out from a mother ship to surround the fish with netting, like cattle in a corral. The bottom of the net is then pulled closed. The baglike net then raises up, trapping the fish inside. Fishermen have traditionally used this method to capture sardines, herring, and mackerel, but purse seines are also used extensively for catching tuna. As imagined, when a giant net is pulled close, species other than those targeted may end up inside, resulting in bycatch. 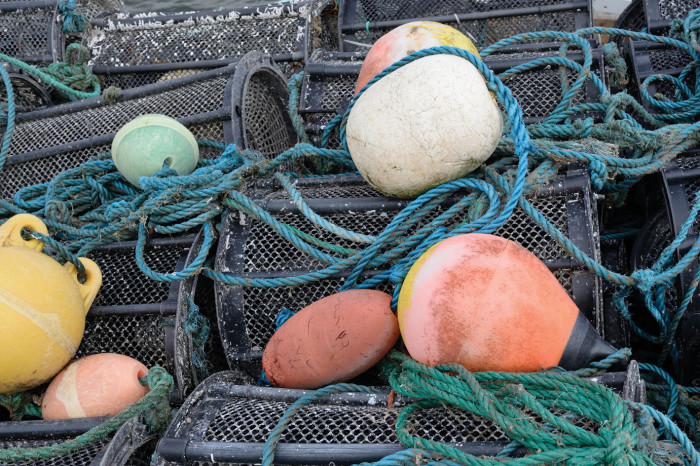 Traps or “pots” are baited cages used to attract the catch and hold it alive until the fisherman returns. Often used for lobster, crab, and shrimp, traps are also occasionally used to catch bottom-dwelling fish, such as sablefish or West Coast rockfish.

Traps are made of wire or wood. They have an entrance, a “kitchen” chamber where the bait rests, and a “parlor” section where undersized animals can escape through vents. Trap fishermen usually lay out many traps attached in a line. After three or four days, they haul their pots aboard, releasing any animals that are too small, too large, or not the right species. Red rock crab, for example, that find their way into traps intended for more commercially viable species like Dungeness crab, are considered incidental catches.

Trawlers drag a cone-shaped net behind boats. Different types of trawl nets are used to fish in the midwater (pelagic trawling) and along the seafloor (bottom trawling). Pelagic trawling is often used to catch large schools of small fish such as anchovies; bottom trawlers target bottom-living fishes like cod, halibut, and rockfish. Some bottom trawl nets are fixed with chains that slap the seabed, “tickling” fish into the net above. “Rockhopper” trawls are fitted with heavy tires that roll the net along a rough and rocky seafloor. In dredging, a related form of fishing, nets with chain-mesh bottoms are dragged through soft sand to catch species like scallops. Unfortunately, trawlers are not selective when it comes to their nets being swept across the ocean floor, resulting in anything and everything being drawn inside, and often resulting in a large percentage of bycatch.

Long rods pull fishing lines behind a moving vessel in the method known as trolling. Fishermen use a variety of lures and baits to troll for different fish at different depths. Trollers take speedy fish that will follow a moving lure, such as salmon, albacore tuna, and mahi-mahi. Even though trollers are targeting specific fish, other less desirable species may end up on the line, resulting in incidental catches.