Adding a savory element to sweet ice cream is both a challenge and an art. Lean too far on the savory element, and you lose your dessert eligibility. Incorporate too little, and you may miss the point. We’ve enjoyed crushed pretzel, jalapeño cornbread, buttermilk biscuit, blue cheese, Sichuan peppercorn and all manners of herbs, spices and vegetables in our frozen treats. Balance your savory element with a little salt and a complementary base, and you’re good to go.

Becky Sunseri, pastry chef and cofounder of Palo Alto, California–based Tin Pot Creamery, set her sights on one ingredient that’s sweet, savory, salty and piquant all at the same time: barbecue sauce. With molasses and brown sugar, complexity from peppers and other spices, and a touch of umami, this reddish-brown liquid gold swirled into ice cream with smoky toffee bits sounds like a recipe for success as far as we’re concerned. 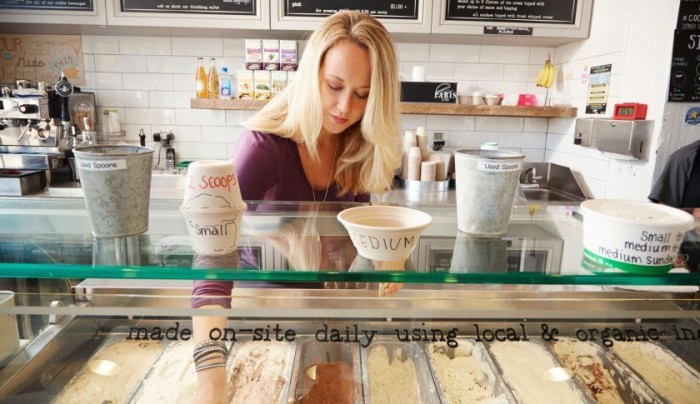 Ken Koenig, founder of online specialty marketplace FoodyDirect and fan of Tin Pot’s sweet and smoky specialty (which his store stocks), says, “The creamery’s cofounder Becky, a trained pastry chef with a degree in nutritional Science from Cornell, created an all-natural barbecue sauce that she eventually realized was a great ice cream topping. So she took that and ran with it, making a delicious homemade barbecue ice cream. I personally like topping this with some bits of corn cookies or shortbread cookies, or even scoop it into a shortcake for a tasty dessert.”

So how does it actually taste? We dug into a pint to see for ourselves. Some thoughts from around the office:

“I notice a caramelized note, which is nice, but it is a bit salty, and overall I don’t like it. I think I’m more of an old-fashioned ice cream flavor girl, and I like my barbecue in meat form.”

“There’s a nice savory, slightly salty component to it, an almost restrained sweetness that would taste great after several types of meaty meals—barbecue, perhaps? That being said, I’m not sure I would have pinpointed the flavor as anything along the lines of ‘barbecue’ without having being told beforehand.”

“I was expecting something more…ketchup-y. It’s very salty on the initial taste, which is not at all unpleasant, with subtle hints of butterscotch. I wonder what it would be like to take a rib and dip it into the ice cream.”

“I was expecting sort of a tangier flavor, like a Sweet Baby Ray taste.”

So while it’s not exactly reminiscent of a rack of baby backs, the barbecue-caramel swirl does harken to the sweetness and balanced spice of a good smoky slather and is a delicious new way to look at the ever-growing craft of small-batch ice cream.