Stuffing: It doesn’t come from a box. Well, it does, or at least it can, but that by no means indicates that it should. Employ a little creativity when it comes to one of the only side dishes that appears once or so a year — we’re talking homemade cornbread, Belgian waffles, sourdough cubes, hearty wild rice and seasonings and flavorings that tantalize and delight — and set down a dish of something everyone wants a scoop of, right next to the turkey.

I’m all for making stuffing out of anything but stale little chunks of white bread. Last year, we did cornbread. The year before, wild rice. This year, rather than deal with only being able to eat a little stuffing because it’s made with brioche (my original plan), I decided to make Belgian waffle stuffing, which you can eat a surprising amount of. Make stuffing waffles the next day with stuffing made out of waffles, right? Mind blown.

Thanksgiving is a pretty gluten-free-friendly holiday, all things considered — the turkey’s safe, as long as you’ve used a reputable stock to baste it, potatoes are good, veggies are good…aaand we come to the stuffing. So tempting. So moist and chewy, so crisp and savory. So perfect on a perfect bite of turkey, cranberry, veggies and potato all together. And now you can have it.

While I have a soft spot in my heart for Stove Top and that ilk, we can all do better. You know what’s in that box? Seasoned bread crumbs. Come, my child, and let me show you how to ascend to a higher plane of stuffing. It involves sourdough bread and home pickling. And it is good. 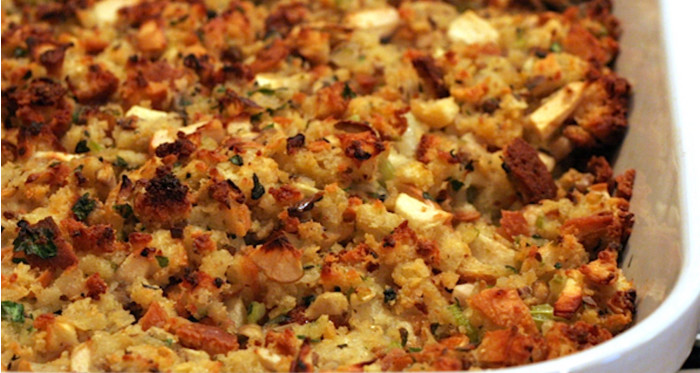 Thanksgiving is approaching, and we’re always in search of a new or unique stuffing recipe. This is one of my favorite stuffing recipes that I like to serve along with some nice collard greens. I added a seasonal favorite into the mix — the pumpkin — and the cinnamon, raisins, and pears add a hint of sweetness to the dish. All of the complex flavors are bound to make this one of your holiday favorites.

Here is a recipe I adapted from the cooking of Kurt Gardner, a New York theater man of great culinary passions who has been contributing the dish to our home for years, usually in proportions large enough to feed boroughs. Rare is the month where there is not a frozen bag of this stuff in our freezer, ready to be deployed.