Dan Dunn is Food Republic’s sometime booze columnist, the author of such stories as Introducing The Liam Neeson Drinking Game and Friday Is National Vodka Day. Who The F*&K Cares About National Vodka Day? This man does not hold back.

SPEYSIDE, Scotland — The last time I was in Scotland, I got punched in the face.

It happened a few years ago at a juke joint in Glasgow, which is, let’s be honest, one of the more apropos places for an American to get cold-cocked in Scotland. I was with a buddy from Jersey. We’ll call him Jeff since, well, that’s his real name. And fuck him.

The scenario was a familiar one. We’d both enjoyed a few too many pints. In this case, Tennent’s Super, which packs a wallop at 9 percent ABV. There was a soccer match on the TV above the bar, which naturally gave rise to our basest instincts. I’m not 100 percent certain what it is about soccer that brings out the worst in spectators, but my best guess is prolonged exposure to whiny douchebags with ridiculous hairdos.

With two fresh pints on the bar, I threw down the gauntlet. Chugging contest. Loser picks up the tab. Jeff, however, wasn’t satisfied with those measly stakes. I mentioned that he’s from Jersey, right? South Jersey, to be precise. He wanted blood. Being from Philly and all, well, I was right there with him. The revised wager: Loser picks up the tab and gets a punch from the winner. And somewhere out there in the ether, Tyler Durden smiled.

I lost the bet. Spectacularly. Jeff had already slammed his empty mug on the bar in triumph when Tennent’s Super spurted out my nose and all over the goddamn place. Left a stain that will stay with me forever. The Stain of Shame. Frankly, I deserved to have my Professional Booze Writer card revoked for that debacle. Fortunately, I redeemed myself later that night by making sure Jeff got to his room safely after he threw up outside the hotel. The Booze Gods giveth, and the Booze Gods taketh away.

“You ready?” Jeff asked, as he squared up to sock me.

“You wanna do it right here, at the bar?”

“Ya, otherwise we’ll lose our stools,” he said.

And then he hit me. In the face. Right cheek. Hard.

“I didn’t think you were going to actually do it!”

Again, hard to argue with his reasoning.

Nah, I said, settling back onto my stool. No way I was giving him the satisfaction. Plus, it wasn’t too bad. I felt like I do when people on Facebook post pictures of dogs that are about to be euthanized unless they’re adopted — uncomfortable, but not enough to do anything about it. So I settled down, accepted what had happened, and moved on. Sort of…

I have yet to be physically assaulted on this latest jaunt to Kilt Country, and I doubt it’ll happen. It’s not that kind of trip. I came over here for the official launch of one of the most momentous whisky collections ever created, The Balvenie DCS Compendium. That’s 25 exceptionally rare and diverse single cask single malts curated by David Stewart, who has been with The Balvenie for 53 years and is the longest-tenured Malt Master in the world.

They threw a fancy party at a chichi art gallery in London, where the first of five “chapters” Balvenie will be releasing annually over the next half decade was unveiled. Chapter One comprises five single malts from 1968, 1978, 1985, 1997 and 2005. I tried them all. They’re fantastic. Seriously. This is the really good shiz! I’d tell you about the flavor profiles, but there’s no point. Only six sets of the DCS Compendium will be made available in the U.S., with a suggested retail price of $50,000. It sucks to be fabulously unwealthy, doesn’t it?

But here’s the good news: After the party in London, The Balvenie flew me and some other media types over here to Scotland to visit the distillery in Dufftown, where they produce lots of scotch that schmoes like us can afford. Like the 12-year-old DoubleWood, which is finished in sherry casks that impart a sweetness that is oh so…sweet. A bottle will set you back a mere 50 or 60 bucks. 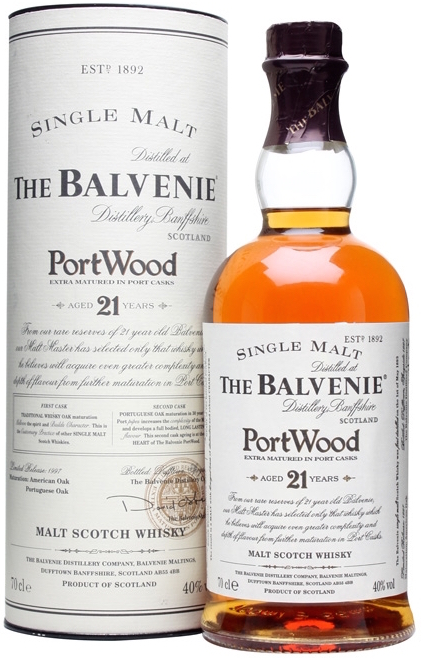 No less an authority on scotch than The Balvenie’s David Stewart himself — who’s like the Jimi Hendrix guitar solo of Malt Masters — pegs his 21-year-old PortWood as one of the finest whiskies on God’s green earth. He told me so over dinner at the Craigellachie Hotel. A dinner and a vacation and a ton of scotch that, admittedly, his employer was paying for, but I’m not one to be swayed by such largesse (straight-up cash, however, is a different story).

Besides, I drank enough of the 21-year-old PortWood to determine all on my own that it’s like the joyous tears of Scarlett Johansson distilled and bottled. And if you can’t scrape together $225 for that kind of wonderful, well, maybe you need to ask yourself what type of man you really are. Unless you’re a woman. Then, never mind.

As for my pal Jeff — the one who cracked me in the cheek — he woke up that next morning in Glasgow feeling hella bad. It wasn’t just the wicked hangover, either. He also had a big welt on his shoulder that he said was killing him. No idea how it happened. Just like he had no idea that I’d carried him up to his hotel room and put him to bed. Fool thought he did that himself.

“Ow. I feel like I’m the one who got punched last night instead of you,” he groaned.

I just smiled and shook my head. What he doesn’t know won’t hurt him, I thought. Not for more than a few days, anyway.