Last season’s debut of Barn Rocker, a pro hockey–themed ale, was sort of a game changer for the upstart Oyster Bay Brewing Co. “It definitely got us in front of the mass market, both here on Long Island as well as outside of New York,” says cofounder Gabe Haim. The three-year-old craft brewery in Oyster Bay, New York, partnered with its local NHL team, the New York Islanders, to create the special seasonal ale in commemoration of the team’s final season at Nassau Coliseum. The beer is a nod to the 43-year-old arena’s nickname, the Old Barn.

On the night of the Barn Rocker’s first pouring last January, the MSG Network aired an interview with Haim and Oyster Bay cofounder Ryan Schlotter, which helped to promote the brand in some surprisingly far-flung places. “We were getting emails that night and next day from California and Florida and even some from Europe,” says Haim. “It definitely put us on the map with a different crowd, not just the craft beer crowd. It wound up making us visible to hockey fans as well.”

Taps at the Coliseum flowed with the overtime-friendly (4 percent alcohol by volume) ale until the Isles’ final home playoff game last spring, and Haim says the beer has remained a staple throughout the off season at the brewery’s taproom on Long Island.

“It was sort of the perfect storm,” says Haim. “The team was playing really well. It was the last season at the Coliseum, so there was a lot of energy. People were flocking to the areas where Barn Rocker was poured, so it was a big part of our business.”

On Friday night, however, the Islanders kick off a new NHL season in a new stadium, Brooklyn’s Barclays Center. And in addition to the roughly 26-mile difference between the two arenas, Islander fans will also have to get used to a different beer selection at the game. The popular Barn Rocker, for instance, will not be available at Barclays. 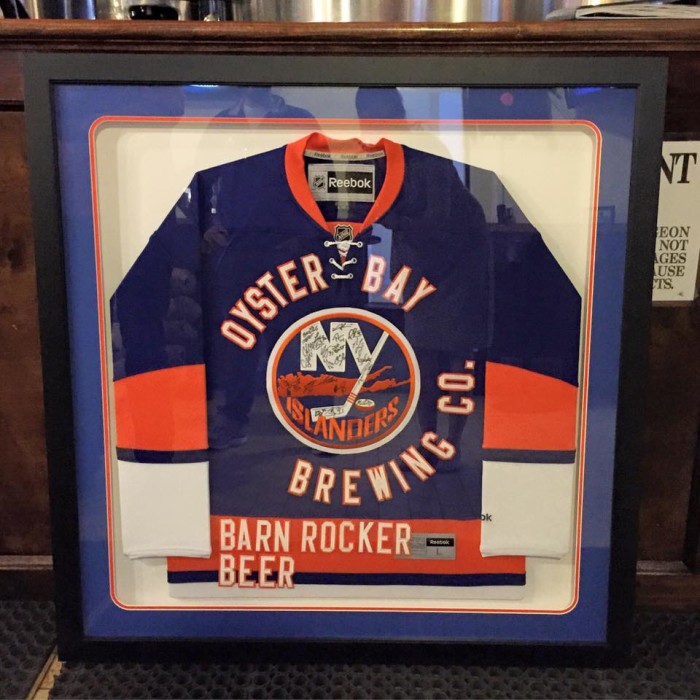 Haim explains that the world’s largest beer company, Anheuser-Busch InBev, maintains exclusive rights to the majority of the stadium’s tap lines, and the remainder is reserved for Brooklyn-based beer brands. “That’s an important thing for Barclays to focus on the local businesses, which I can appreciate,” Haim says. “But it leaves very little room for outside businesses.”

In order for Oyster Bay to make its presence felt at the new arena in Brooklyn, the Long Island brewery will have to do something it has never done before: put its beer in cans. “There’s plenty of room in the coolers [at Barclays],” Haim says. “It’s the tap lines that are the difficult part.”

Haim says the canning process is already under way. “We have the can design all ready,” he says. “It’s all Islander-focused. It’s blue and orange and has the silhouette of a hockey player on it.”

The new cans are just one of several changes coming up for the young brewery, which, like the Islanders, is also moving to a new building in the coming weeks. The new 15-barrel facility will offer greater brewing capacity than its present three-barrel operation, Haim says.

Oyster Bay hopes to have the new Barn Rocker cans ready for distribution around the middle of the NHL season, possibly in January or February.

In the meantime, Islander fans who aren’t schlepping to Brooklyn can drink their fill of Barn Rocker while watching a broadcast of Friday’s game at the brewery on Long Island. “We have a nice little party set up,” Haim says.

The brewery cofounder himself, however, will be watching the game from a friends’ private box at Barclays Center. No, he won’t be drinking Brooklyn beer. He’s bringing his own. “I’ll have a couple of growlers of [Barn Rocker],” Haim says. “It’ll be a fun night.”