For anyone who has a basic familiarity with liquor, describing TinCup whiskey is a piece of cake. Amber-colored, it has a sweet opening flavor, which segues into a spicy middle and a sharp, woody finish. It goes well with a variety of mixers, blending nicely, yet retaining a distinctive character. Sold at $27 per bottle – roughly the same price as Jack Daniels or Elijah Craig 12-year – it’s basically a solid, mid-range bourbon.

But that’s where things get complicated – and where TinCup’s creator, Jess Graber, has waded into the whiskey name game with fists swinging. Legally, any American whiskey distilled from at least 51% corn, aged in new oak casks and bottled at 80 proof or higher is a bourbon. TinCup’s mash bill – 64% corn, 32% rye and 4% malted barley – and barrel-aging should make its designation simple. The trouble is, while Congress settled liquor definitions in 1964, battles still rage over the bourbon name, spearheaded by the (mistaken) belief that it only refers to whiskey distilled in Kentucky.

This, incidentally, is why Jack Daniels, the country’s best-selling bourbon, is called “Tennessee whiskey” – even though it’s distilled from 80% corn and aged in new oak barrels. For that matter, it also explains why some booze critics continue to waste time arguing about the subtle differences between “Tennessee whiskey” and bourbon – differences that are a heck of a lot smaller than the flavor differentials between whiskeys from any two regions in Scotland.

To complicate matters even further, TinCup’s provenance is a tangled mess. The grain comes from all over the Midwest, the liquor is distilled and aged in Indiana and the bottling is done in Denver. And just in case things aren’t confusing enough, it’s named after an old Colorado mining town and sold in deeply embossed bottles that proclaim its Colorado bona fides, like the fact that it’s made with “pure Rocky Mountain water.”

This last move, in particular, has drawn the ire of critics, some of whom have claimed that TinCup is using Colorado imagery to sell what is, in fact, a Midwestern liquor. Graber counters that it’s hard to overemphasize the importance of Colorado water. “You could make an amazing distillate, but if you cut it with swamp water, it’s going to taste like swamp,” he points out. “Colorado water comes from the Rockies. As it flows downhill, it picks up a mineral character that makes it smoother.”

Graber notes that TinCup’s extravagantly embossed bottles also have a little bit of Colorado pedigree. “I was working in the mountains, just outside Aspen, when I found this old rectangular pint bottle in an old trash heap,” he recalls. “On one side, it was embossed ‘Dr. Sanford’s,’ and on the front, it said ‘Liver Invigorator.’ It was an old snake medicine bottle!” 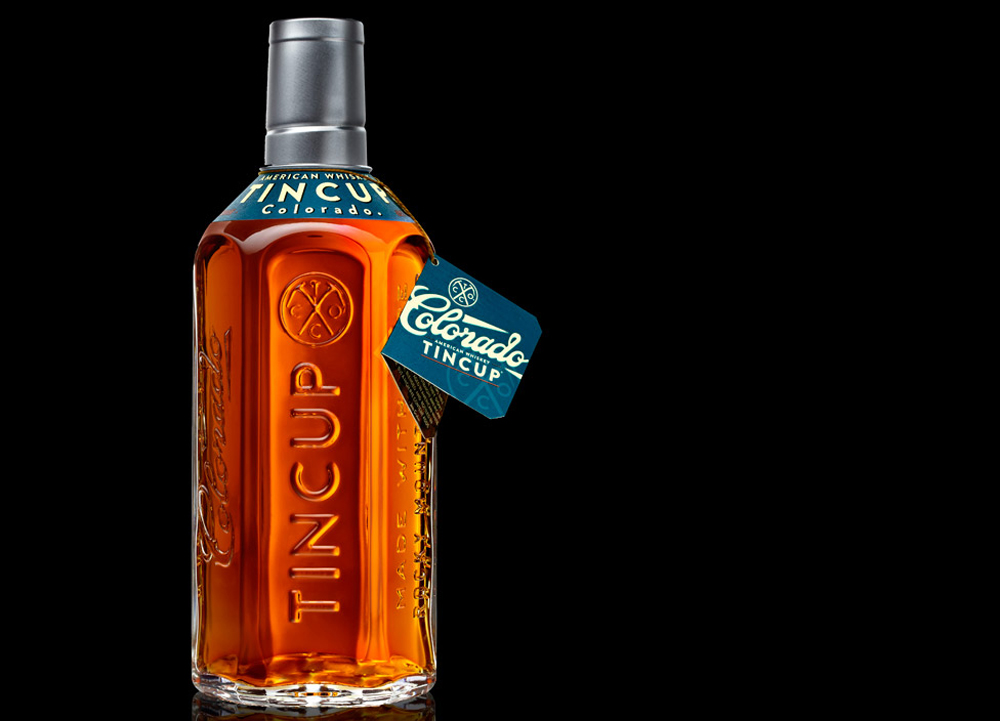 TinCup has stirred controversy in the whiskey and bourbon world, with a bottle inspired, ironically enough, by Colorado snake oil medicine.

The snake oil showmanship has rubbed off in other ways. Graber – who wears fringed jackets and cultivates a larger-than-life persona – has thrown his own monkey wrench into the liquor name game. Rather than trying to untangle a host of cultural attitudes and legal definitions, he sells TinCup “American whiskey” – a term that is legally meaningless, but – Graber argues – has major cultural power. “Everybody knows what American whiskey is,” he says. “It’s basically bourbon.” But, by moving away from a heavily fraught term, he’s managed to escape a lot of baggage – and, in the process, aim his product at a more sophisticated market. “I didn’t want a whiskey for some 18-year-old who’s experimenting, but rather for people who are thinking through their whiskey choices.”

If TinCup stands at a confusing crossroads, it pales beside Stranahan’s, Graber’s craft-whiskey offering. The result of a bit of distillery mad science, Stranahan’s came about as a partnership with a brewery. “I was doing what I called ‘practical experiments with distillation,’ which sounds a lot better than ‘moonshining,’” Graber explains. “I came across a couple of kegs of Flying Dog Beer and asked the brewers if I could distill them. They said ‘sure, but why would you want to?’ I told them that, even though the beer was flat, it still had alcohol, which I could use.” The finished product was a hopped, malted-barley whiskey that, Graber says, “was cleaner-tasting than the corn mash whiskey that I’d been experimenting with.”

His experiments eventually led to Stranahan’s, a whiskey made from 100% malted barley. Legally, it would be classified as a “malt whiskey,” a term that carries a lot of weight among Scotch drinkers, but isn’t generally associated with American-made whiskies. And lest the Scotch comparisons come too easily, Graber has further confused things with his production method. In most Scotches, the barley is dried over peat fires and the distillate is aged in used bourbon barrels. Stranahan’s, on the other hand, is unpeated, unsmoked and aged in new oak barrels.

To put it mildly, Stranahan’s is at a crossroads. “American malt whiskey” is a meaningless term for consumers, and the name “Scotch” is inaccurate, both from a technique and a terroir perspective. Oregon’s Clear Creek Distillery, which makes a whiskey from Scottish malted barley, calls their product “Oregon Single Malt,” and Yamazaki Single Malt – the so-called “best Scotch in the world” – doesn’t actually call itself a Scotch.

As with TinCup, Graber cut through the linguistic fog with Stranahan’s. He called it “Colorado whiskey,” bottled it at 84 proof and stood back. It soon gained a strong following among craft whiskey drinkers, who appreciated its smooth flavor and – perversely – seemed to enjoy the fact that it was all but impossible to get outside of Colorado. This year, however, Graber announced that the whiskey is going to be sold across the country.

It’s not hard to see why Stranahan’s has so many fans: it’s got the smooth character of a single malt, but doesn’t have any of the smoky, peaty or seaweedy flavors of a Scotch. It makes a good, comforting tipple neat or on the rocks – and, unlike most Scotches, it also mixes easily. Then again, at $57 for a fifth, it’s a bit pricey to use as a cocktail base.

So, having produced two distinctive, idiosyncratic whiskeys and sold them under two legally meaningless designations, Jess Graber has created a couple of delicious quandaries. Getting back to the original question – “What is Colorado whiskey?” – and, of course, to the subsequent question – “What is American whiskey?” – it’s pretty clear that the simple answer is “whatever the hell Jess Graber says it is.”