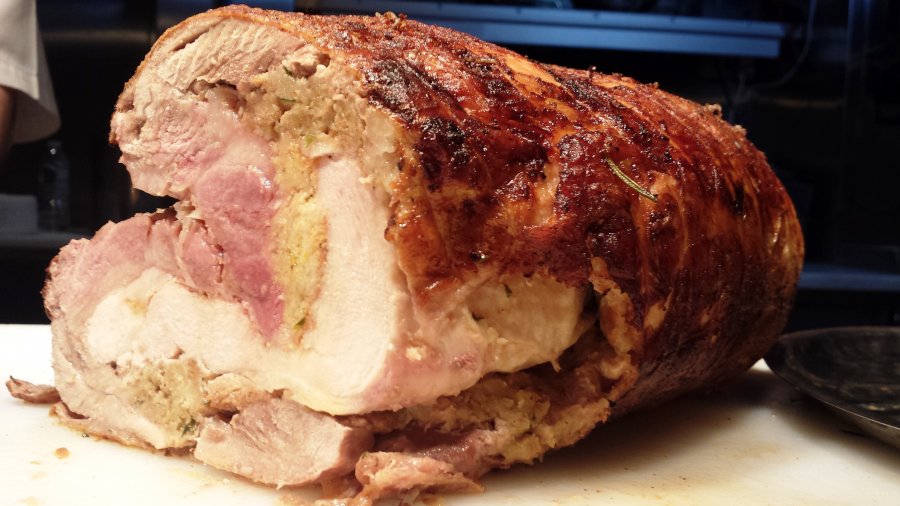 “You don’t have any sort of time limit do you?” asks Ed Cotton, executive chef at Sotto 13. The restaurant, located in New York’s West Village, is perhaps best known for its Italian-style tapas. But today, we’re not talking about small plates. Far from it. We have something much more substantial in mind. “No,” I reply. “I’ve got all afternoon.” Good thing, too: Cotton is standing over three distinctly different birds, each de-feathered and primed for some serious prep work.

With Halloween scarcely behind us, Cotton has agreed to show me how to make a turducken. This extreme Thanksgiving trifecta — a chicken stuffed inside a duck stuffed inside a turkey, all separated by layers of savory stuffing — had been a source of fascination for years. Now, I’m not a complete stranger to butchering. In the past, I’ve helped to spit-roast whole goats and to break down and barbecue a whole hog. But this would be my first experience with the nigh mythical turducken.

I’ve always associated turducken with Cajun cookery, and Cotton says that his love for this Thanksgiving portmanteau started when he worked at the esteemed Daniel with a cook from New Orleans, who talked about it all the time. Cotton’s been making turducken for 11 years, and I was eager to see him get to work on his second Frankenbird of the season. The first was already roasting in the oven.

Originally, Cotton’s restaurant was scheduled to be open for Thanksgiving this year, and the special holiday menu would feature an Italian-inspired turducken with hot Italian sausage made with the turkey trimmings, foccacia bread stuffing with rosemary and Arborio rice risotto stuffing for the duck. But management ultimately thought better of it. The staff will now enjoy a well-deserved holiday off. And the only person who gets to taste chef Cotton’s unique triple dose of poultry, it seems, is myself. (Well, myself and his family, who’ll be enjoying their own chef-prepared turducken at home next week). 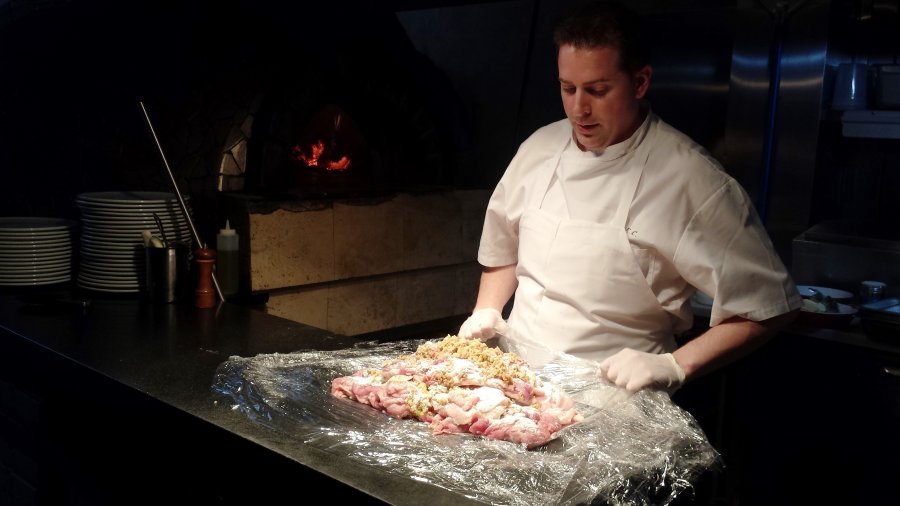 Cotton explains that his twist on turducken is actually a ballotine — a boneless layered roast from the French word for bundle — as he gets to work on one of the birds. “We’re just following the contour of the bird,” the chef says. “The bird’s going to tell you where it wants to be cut,” he adds, running a knife along one side of the backbone and then the other. My mind flashes between Dan Aykroyd bloodying himself as Julia Child on Saturday Night Live, and my brief stint as a line cook for a certain chef who we shall call the Human Panda, who used to scream at me, “Dude, the way you are holding that knife scares me. You are going to cut yourself.”

Cotton seems to pick up on my cutlery-based insecurities. “I don’t butcher every single day,” he says, gleefully ripping the backbone out, “but, those guys that do could probably process one in about 15 minutes.” Soon the legs and wings are removed and we’re left with a squarish slab of turkey flesh.

With the turkey deboned and flattened, Cotton adds a layer of stuffing consisting of celery, onion and poultry seasoning. It’s pretty much the same stuffing my Mom used every Thanksgiving. Then, he reaches for something a bit more sophisticated than anything from Mom’s old playbook — transglutaminase, better known as meat glue. “Remember we’re doing something that’s not natural for a turkey to do,” Cotton says, as he applies the adhesive to the stuffing before turning his knife to the chicken.

Cotton makes short work of deboning the smaller bird, and I can’t help but think that putting the chicken before the duck sort of changes things — more of a “turhenduck,” if you will, than turducken. I am also fighting the urge to ask him whether he’d ever used a pheasant to make a turphucken. 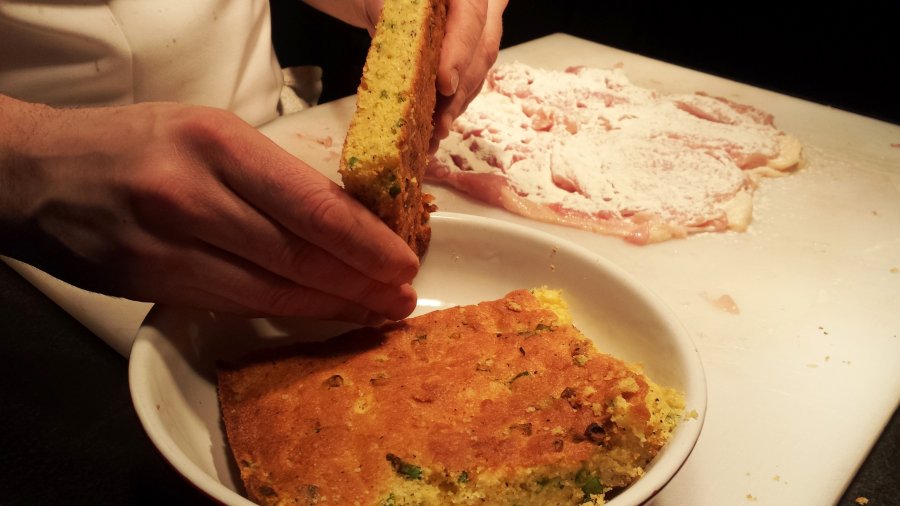 Chef Cotton incorporates crumbled corn bread into the chicken portion of the turducken.

“I like cornbread and chicken,” Cotton says, as he crumbles pepperjack, jalapeno and scallion corn bread atop the chicken. And then some more meat glue.

As Cotton debones the duck, making sure to remove much of the fat, I am reminded of an ambitious home cook friend who deboned a duck last Christmas after watching Jacques Pepin on YouTube. It was all we could do to keep the amateur chef from adding pumpkin pie spice to his creation.

Cotton then adds some Cajun dirty rice stuffing to the duck, which he places on top of the chicken and turkey. And, of course, more meat glue. “So, I’m sure you’re saying this looks like a hot mess,” the chef says, gesturing to the unseemly looking mountain of meat. “I promise you, sir, the turducken will prevail.”

Next, Cotton bundles his creation up in many, many layers of plastic wrap, to create a gigantic Thanksgiving ballotine he then places in a net to furher hold its shape while poaching for an hour. After poaching, the turducken will be seared and then roasted.

After watching Cotton debone and stuff three birds, all the while trying to document the process with a cell phone camera, I’ve almost forgotten that there is another whole turducken that’s been cooking in the oven this entire time.

“We are pretty close to carving mode,” Cotton says, retrieving a rondeau from the oven. Inside, the burnished Thanksgiving ballotine rests atop a lovely jus of caramelized onions, celery, carrots and bay leaves. “Good gravy!” the chef declares, after taking a tiny taste. Then, he starts cutting. “I love me an electric knife,” the chef says, powering up his trusty vibrating blade. As he slices, the interior of the massive meat log reveals itself. Beneath the golden skin: a layer of turkey meat and stuffing, then chicken and more stuffing, and lastly, a rosy core of duck and its respective stuffing. 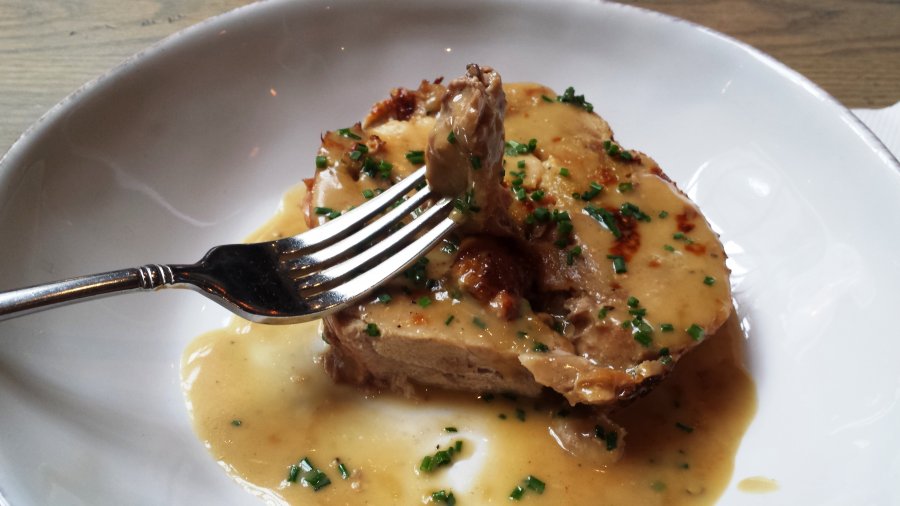 Chef Cotton tops his slices with a rich gravy made from the bones of all three birds.

Anointed with a rich turducken gravy made from the bones of all three birds, the end result is quite nice. And after witnessing this seasonal spectacle for myself, I feel properly, well, thankful. But, I have to say that given my woeful knife skills, it’s not something I’ll be trying at home any time soon.

As I dig into the turducken, I am trying to recall where I’d last seen an electric knife. And then I remember: it was one of the shawarma parlors in Kew Gardens Hills, Queens, where they shave slices. And that makes me think of one of my favorite shawarma spots, which adds turkey to its lamb shawarma.

Now that I’ve partaken of the turducken, I want to push the culinary envelope. All I’ve got to do is find some chef friends to cook me a shawarturduckhen. I’d do a popup in one of my favorite shawarma parlors, but I’m pretty sure meat glue isn’t kosher.

Read more about butchering and charcuterie on Food Republic: