Last week New York City chef Alex Stupak hosted the last of his Push Project dinners at Empellón Cocina with Grant Achatz of Alinea. What’s a Push Project dinner, you ask? Over the last year, Stupak has invited chefs — Enrique Olvera (Pujol in Mexico City), Jordan Kahn (Red Medicine in Los Angeles) and Chris Cosentino (Incanto in San Francisco) — to come and take over his kitchen for one night, for a collaborative dinner and exchange of ideas and inspiration.

These dinners have the conviviality of a high school exchange program, with focus and purpose. In all the years we’ve spent in kitchens with chefs before dinner service, this might have been the busiest kitchen we’ve ever seen. “Come downstairs, there’s a whole gaggle of chefs down there too,” Stupak says as we descend into the basement kitchen.

The night before, Stupak and Achatz had hosted a Thanksgiving themed dinner in the way that only the mind behind Chicago’s globally lauded Alinea could cook Thanksgiving. Soon after the dinner, they decided to do it all again the following night with a more “spontaneous menu” —different than the previous night’s…and with more chefs.

This is the backdrop when, at the end of the stairs, we find squab (lots of squab), squab brains and oven-blackened bananas. Ken Oringer and Wylie Dufresne are expected to show up later in the day to lend a hand. We catch Stupak prepping his dessert of lemon curd with meringue and brown butter, with Achatz working on his banana, celery and truffle dish nearby. 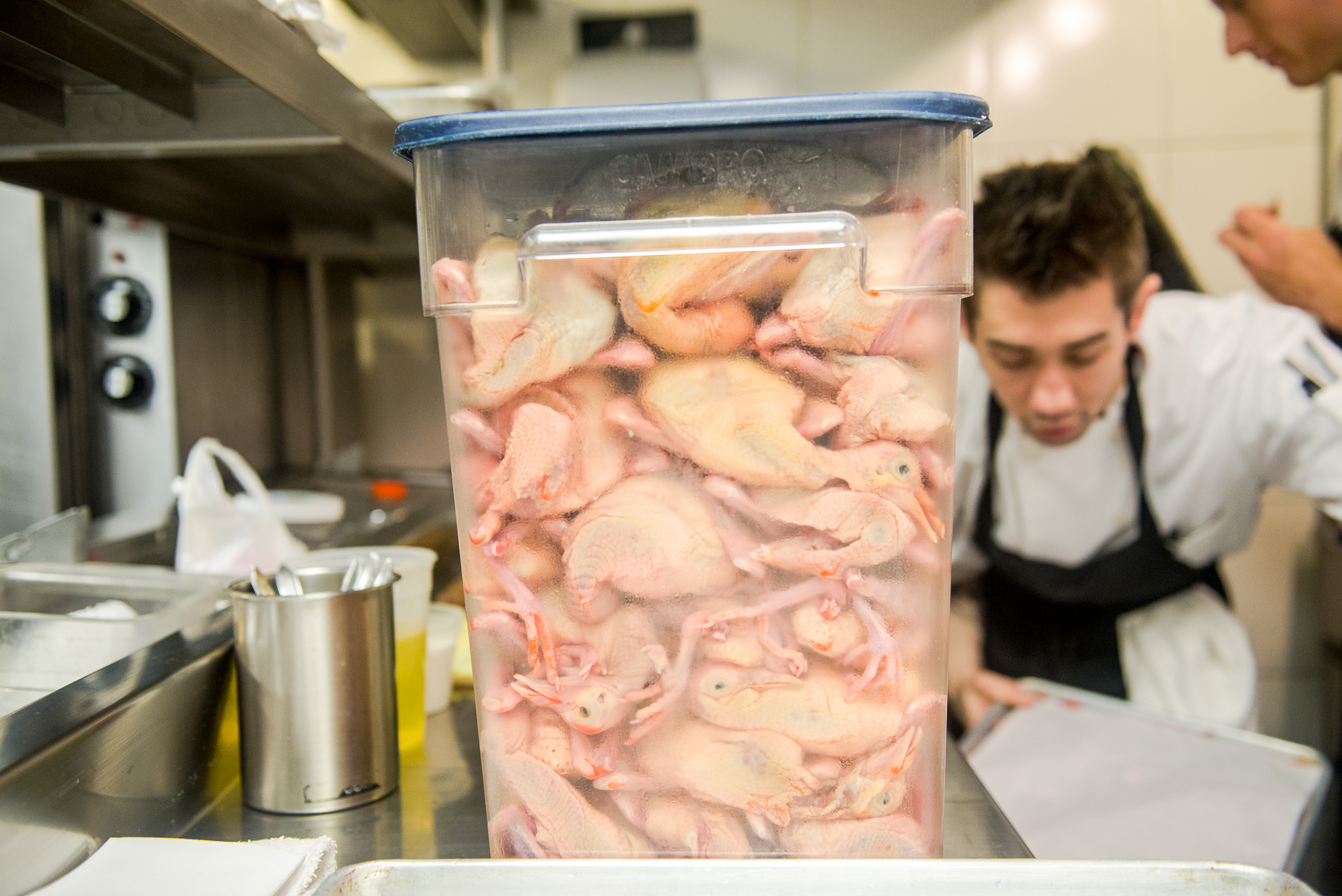 Can you walk us through the process of having someone else in your kitchen? Is it super fun, is it awkward?
Alex Stupak: It is super fun, it shouldn’t be awkward. But any time you invite a guest to cook in your kitchen, you are to a certain extent releasing a great deal of control. If you have a guest in your home, you want to make sure they’re well looked after and taken care of, and you can’t take it with a grain of salt. If you are inviting a chef to bring his style of cooking and his mentality to your restaurant for a day, everyone has to be alert and on point and ready to be flexible. Basically you’re trying to change your restaurant in a day. That’s what it is.

Are you learning from having Grant here with you?
Achatz chuckles and gives a wry shake “no” of the head.
AS: When you work for someone, even if it was briefly, you’re watching that from afar. But I mean, Grant’s here prepping a course. There are a lot of chefs who can simply phone it in, and send a sous chef to be ‘here’s a mise en place’ and then show up to plate it. But that in fact has not happened in the last few days. Maybe it’s not something to learn, but it’s super inspiring.

Is there anything in particular that Grant has done that has been exciting to see?
AS: He definitely tested the limits of my serving staff yesterday. Back to converting a restaurant [in a day], you’re going from a restaurant that typically a server walks into the kitchen and you hand them two plates, maybe three if they’re super busy and in the weeds, and they walk out and place them on a table. To go from that to a meal having multiple pieces, some table-side, and some that are requiring new and unfamiliar physical elements. That’s difficult.

So you won’t be bringing these ideas to your kitchen anytime soon-ish?
AS: When you’re conceptualizing a dish, and you’re thinking of the flavors and the textures and the seasonality of it and the plating, everything that we typically consider when we consider it, I can tell you that I’ve been super inspired and said to myself, ‘Maybe our restaurant should be not only curating and crafting the food, but curating the vessel that it goes on.’ Grant’s work is Grant’s work, it’s the equivalent of doing the moonwalk. You know it comes from Michael Jackson, right? But to the point where, ‘Hell, we’re going to make a dish of carnitas. Well, that’s great, but maybe if you actually get an earthenware vessel from Michoacán where carnitas are most famous.’ We haven’t been doing that and this had made me think, maybe we really should be considering everything on a deeper level.

What did you think of the strip mall restaurant that dressed up like Alinea for Halloween?
GA: Hilarious! Right down to the plating the final dessert and then wiping it off with a squeegee… 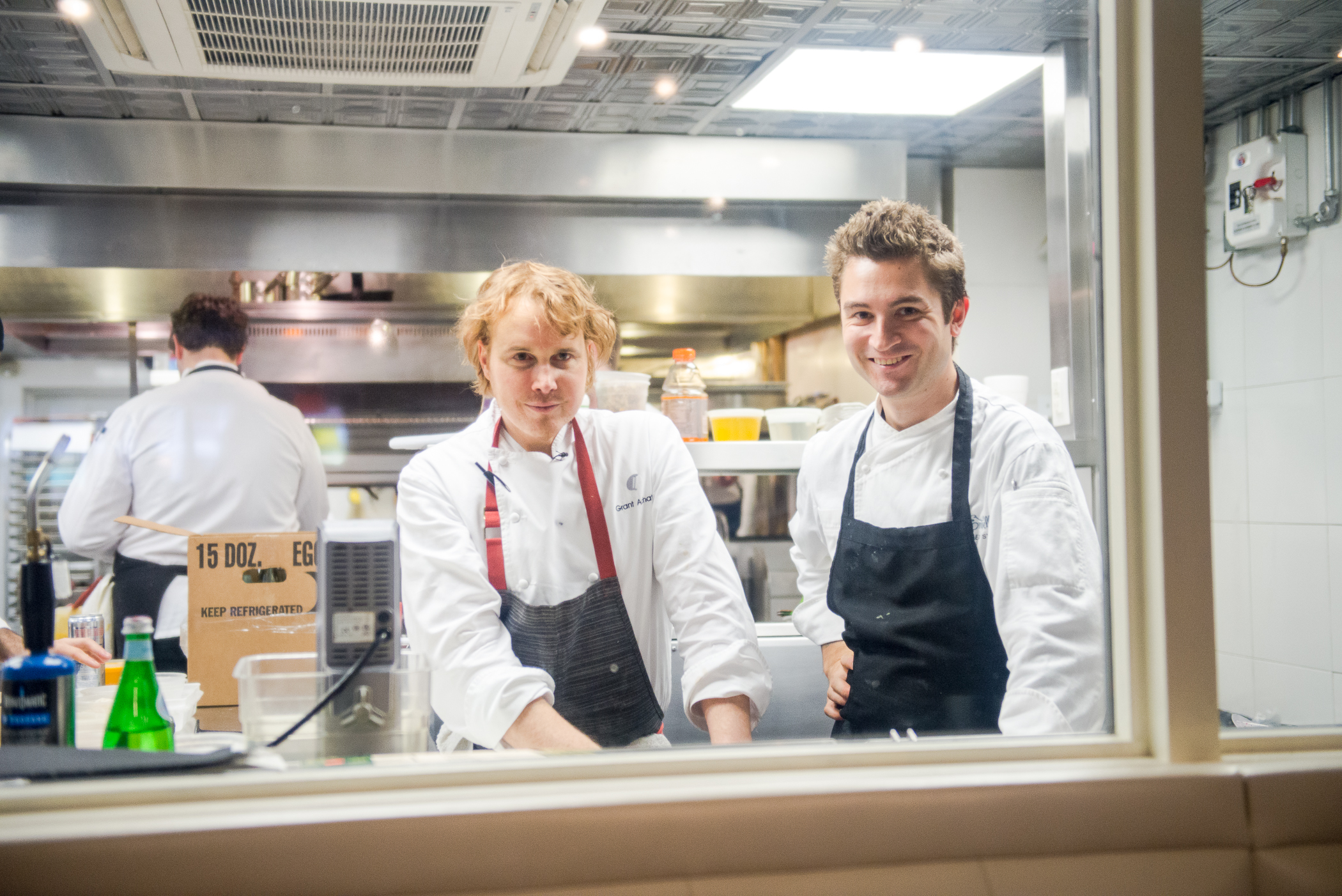