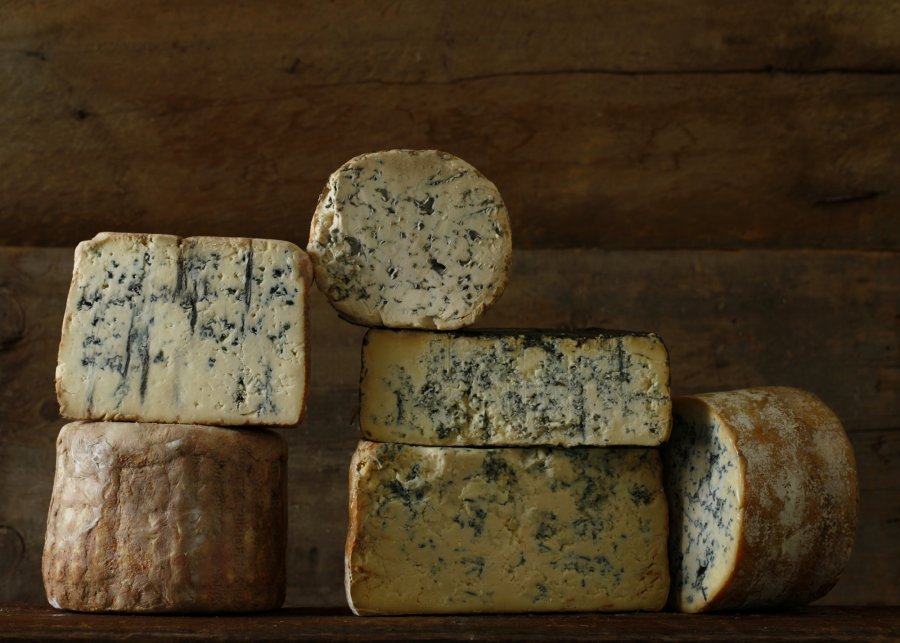 Emilio Mignucci and Tenaya Darlington are a dynamic pair. Fueled by passion for good cheese above all else, they flitted around The Little Owl event space in the West Village (where we throw parties!), tossing around metaphors and spitting out fromage knowledge faster than the pairings could arrive at the table. The tasting I attended, featuring cheeses from Di Bruno Bros. and wine from Moore Brothers importers, celebrated the launch of Darlington’s and Di Bruno Brothers’ first collaborative cookbook, Di Bruno Bros. House of Cheese: A Guide to Wedges, Recipes and Pairings. The book, published in May, features 170 cheese profiles, 70 recipes and 10 themed cheese boards. It’s quite the guide.

Mignucci, along with his brother Billy Jr. and cousin Bill, are the third-generation owners of Di Bruno Bros. Italian Market in Philadelphia. Mignucci’s grandfather, Danny Di Bruno, and uncle, Joe Di Bruno, founded the shop in 1939, and the current owners don’t take their history for granted. “We ask ourselves, ‘what would Danny and Joe do,’” Mignucci said. “That’s how we come up with the answers.”

Darlington, who dons many titles: novelist, journalist, professor of writing at Saint Joseph’s University and blogger under the cyber pseudonym, Madame Fromage, stumbled into the shop back in 2005 upon first moving to Philadelphia. She soon gained acclaim in the city as a cheese courtesan, and after tasting her way through Di Bruno’s selection, decided to write a guide — a portable, personal cheesemonger that won’t raise an eyebrow when you don’t know the difference between a brie and a Camembert.

Mignucci was more than happy to provide the cheese and leave the writing to Darlington. “I eat and I drink; I don’t write,” he said. Mignucci does carry invaluable knowledge about his family’s prized product. “I don’t want to sound like a cheese snob” Mignucci starts, interrupted by laughter. “But I know more about it than most people.” And perhaps more importantly, he appreciates the heck out of it. “It was the first food, and it’s the greatest food in the world,” he boldy claims. “You get all the vitamins and minerals you need…in my mind, it’s the perfect food.”

I’m all in favor of reconstructing the food pyramid to fit a cheese-bread-wine model, and thankfully secured a seat at the tasting table for first well-balanced sampling. Each guest was provided with a menu and flavor wheel divided into categories (spicy, lactic, fruity, roasted empyreumatic, vegetable, animal) and further sub-categories to help identify the characteristics of the cheese. Up first: the baby of the group.

Burrata (Baby Face) and Camembert (Quiet Type) with Chardonnay
“What are these crazy things? They look almost placental.” That was Darlington recalling first seeing burrata swimming about in vats of liquid. The burrata on the plate, cradling a pool of olive oil and sprinkled with sea salt, looked infinitely more appetizing than the imagined comparison, particularly when paired with a Chardonnay. It’s the freshness that earns this cheese Darlington’s “Baby Face” title. Di Bruno Bros. wraps each portion in a leek leaf, which makes it easy for the buyer to assess. The cheese is fresh if the leaves are bright green (and they always are). Pretty clever.

Then there was the Camembert, a “Quiet Type,” paired with walnuts and dried apricot. As Darlington put it, the kind of cheese that “wants to party in a casual way.” Our tasting hosts were glad to see few rinds left on the plates. “The rind is where all the flavor is. It tells you the story: the terroir, region and area,” Mignucci said. Everyone around the table nodded in agreement. Perhaps we all harbor a complex about getting strange looks for eating the questionably edible rind at less cheese-centric venues.

Shellbark Sharp II (Free Spirit) and Delice de Bourgogne (Vixen) with Roero Arneis
The “sexy” cheeses, as Darlington described them, were fittingly paired with shamelessly sweet fruit accents — the Shellbark with strawberry rhubarb preserves and the Delice with Amarena cherries. The Shellbark, a so-called “Free Spirit,” is a goat cheese, but carrying notes of citrus and herbs, it has more complexity than your typical chevre-in-a-plastic-box. It was the mix of textures, the crumbly cheese with the seed-studded preserves, that distinguished the pairing.

Delice, the “Vixen,” is the “world’s best party cheese,” according to Darlington. “If they came to your house, they’d be draping themselves all over the couch,” she said of Delices. The Roero Arneis was just as unapologetic in its sweetness and mouthfeel. “When I’m eating I want to taste the flavors,” Mignucci said of the wine. “[The Roero Arneis] is sweet but has savory notes as well.” 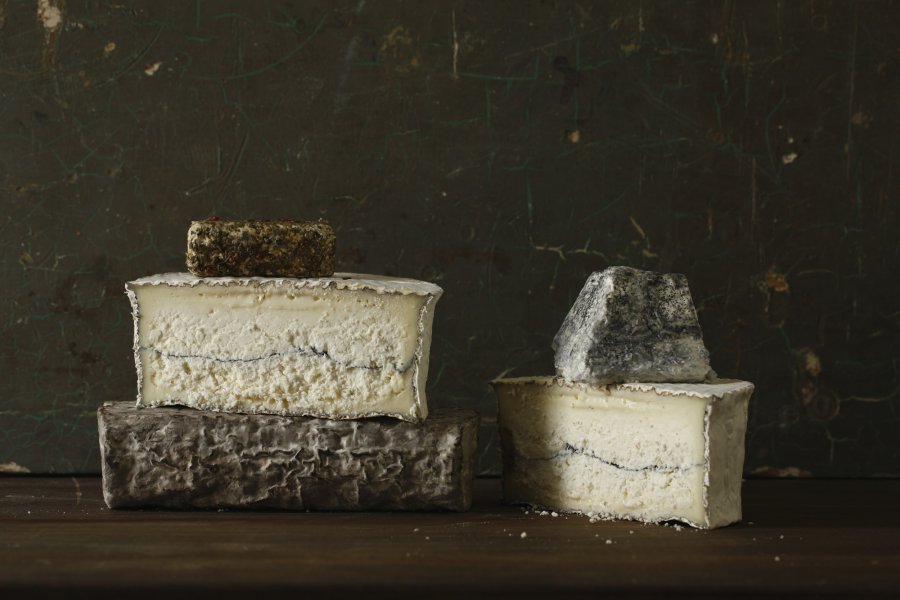 Marcel Petit Comté (Mountain Man) with Fleet Street
At this point, Darlington channeled her own “Free Spirit” Shellbark and gave a lesson in yogic breathing: “Let the cheese sit on your tongue, breathe in and then breathe out through your nose.” This ensures that you absorb the whole flavor before it dissipates. The technique lent itself well to the hearty Comté. The rustic salami it was paired with intensified the buttery notes. The protein crystals in this cheese are distributed unevenly throughout, so you’ll also experience a “scattered flavor,” Mignucci noted.

Montgomery’s Cheddar (Rockstar) and Tumapersa (Wise Guy)
The raw cow’s milk Cheddar was served straight up, no frills. In the cookbook, Darlington describes it as “not just one of the best Cheddars in the world, but one of the best cheeses in existence.” A big statement to live up to, but we again practiced the Darlington breathing method, and from the looks on everyone’s faces, it seemed like all were in agreement. This cheese is damn good.

The Tumapersa was served on a pool of white truffle honey, which toned down the cheese’s attitude. “The Tumapersa is the wise guys of all wise guys,” Darlington explained. It undergoes a white wine wash and wears a black pepper rind. As the tasting menu read, the Tumapersa is: “like all Sicilians: stubborn bold and soaked in wine.”

Moliterno (Wise Guy) with a Dirty Martini
There was a last-minute menu change, so the Adrahan (The Stinker) didn’t make it onto the plate. But it was replaced by another wise guy, Moliterno and a dirty martini, so no one was exactly complaining. According to Mignucci, this Pecorino-style cheese can be kept for weeks without going bad. If you lose track of it for a while and then find it again, “you’ll be surprised how good it is because it’s so goddamned good,” he said. The cheese didn’t necessitate much more explanation. Served with a hot pepper jam, the pairing was one big mix of salt, spice and savory. Darlington added yet another easy-to-remember take home: “You can’t go wrong with a dirty martini and a dry, salty cheese.” We’re writing that one down.

L’Amuse Gouda (Sugar Mama) and Blue de Bufala (Pierced Punk) with Riesling
Finally, the dessert cheeses, because we deserved a bit of indulgence after all the exhausting yogic cheese breathing. The gouda, taking form in bright orange crumbles, is Darlington’s movie snack of choice. She sits smugly with the golden chunks in her pocket, eliciting envy from the popcorn eaters. Fake butter from the pump has nothing on this rich cheese. “Think brown sugar and caramel,” she suggested. The cheese is sweet on its own, but the honey-roasted pecans it was paired with brought it to another level. As for the Blue di Bufala (that’s water buffalo blue) Darlington suggested to “think of white chocolate,” and she was right. But just in case the chocolate doesn’t come through in just the cheese, Di Bruno Bros. paired it with dark-chocolate covered figs to get the job done. “It’s the best way to end the night,” said Darlington, “chocolate and blue.”