The global problem of wasted food is an urgent one, with consumers constantly encouraged to be mindful of overpurchasing and implement at-home solutions. You’ve heard the statistic: About 40 percent of all the food grown and produced in the world goes to landfills. While that collective mindset sinks in, however, the UK’s restaurant and catering industry has a new champion of large-scale food rescue. Too Good to Go, available in Brighton, Leeds, Birmingham and Manchester and newly launched in London, allows you to purchase unsold food that a restaurant or café would have otherwise discarded.

Anyone who’s worked in the food service industry has seen the volume of perfectly edible food thrown away because nobody bought it. In truth, “perfectly edible” may be the two most powerful words in the interconnected issues of hunger and food waste. With that in mind, cofounders Jamie Crummie and Chris Wilson reached out to London restaurants to see if any would be willing to allow customers in after closing time to fill up (recyclable) takeout boxes for a discounted price. The result: extra money for the restaurant, extra food for those who would benefit from the discount — family-sized portions for the equivalent of between $2.50 and $5 per meal — and far less food thrown away. And by the way, $5 will get you a box from “the second best Japanese restaurant in the country!” 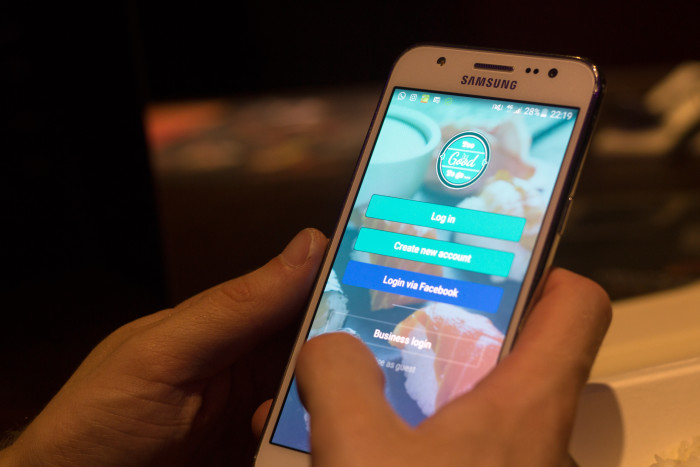 So who’s in? Cofounder Chris Wilson reported on the company’s blog last Thursday, “We’ve partnered with 95 restaurants in the heart of the capital to help reduce food waste and rescue surplus restaurant food that would otherwise be destined for the landfill. Around 40 of these are now available to order from, and the rest will be live in the coming days.”

Just imagine that in your city — heading to a neighborhood Italian place to rescue lasagna for dinner tomorrow night, then enjoying the knowledge that the lasagna is being enjoyed instead of tossed out. Plus, everyone knows it’s better the next day. According to TGTG’s website, “Our primary goal is to raise awareness of food wastage, but we also want to prove that much of what is binned is perfectly safe for consumption.” Already nominated for a Sustainia “100 Most Sustainable Initiatives” award, the app also has a “donate a meal” feature. Check out the video below to see it in action, and let’s hope we see it Stateside soon.