Marissa A. Ross, Bon Appétit‘s wine editor, likes to drink straight from the bottle and we have the photographic evidence to prove it. Okay, maybe she’s just pretending, but we still like her style.

The comedy writer-turned-wine columnist just released her book Wine. All The Time. It has the power to make you feel like you can finally conquer the wide world of wine without feeling like a blubbering idiot. Ross’ laser-pointed focus on building confidence with a casual attitude is exactly what all April Ludgates who want to be Craig Middlebrooks yearn for. Ross tipsily teaches about low-intervention wines, and how to read labels while Arrested Development plays in the background.

The book outlines everything an inspiring oenophile wants and needs to know about being knowledgeable about wine. From why natural and organic wines are a thing to why rosé is best paired with Drake (take her word for it, she also used to write about music), all your questions will be answered. When do you decant a wine? Which bottle is best when you want a good cry? She’s got you covered.

The best part of Wine. All The Time. isn’t how smart and cultured you’re going to sound to your friends after you’ve read it. It’s how f**king funny it is. On talking to wine shopkeepers about how much you’d like to spend, Ross writes, “When you’re asking your questions, or giving specifics on what you’re looking for, throw in a quick ‘I’m looking in the $15 price range’ or ‘Something under $30’ or ‘SKY’S THE LIMIT, PAL, MAMA GOT PAID! But no, seriously, let’s keep it around $50.'”

Ross tells us about how she turned a semi-foul-mouthed hobby into a paying long-term gig, and then into a book deal. So throw out all the stuffiness and other preconceptions you’ve ever known about vino, read, laugh and drink. 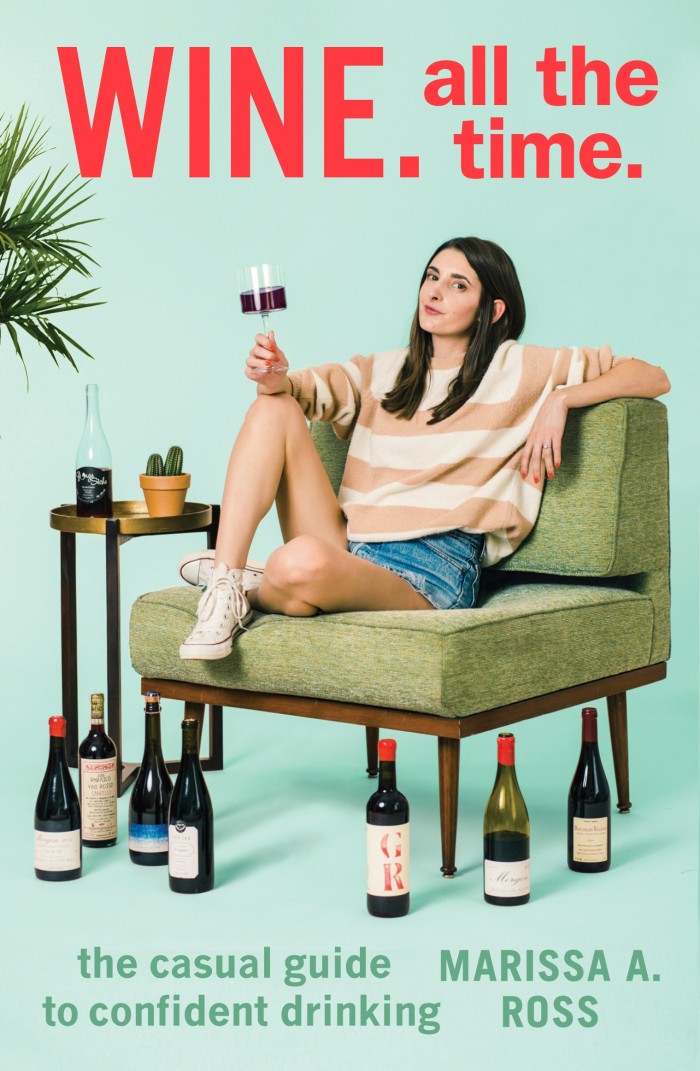 How did you get into wine? Any obstacles?
I just really loved wine and started writing about it in 2012. It was my hobby while I was actively pursuing comedy writing, so there weren’t really any obstacles for a while because writing about wine was just for me. Things drastically changed after I was profiled by Grub Street in 2015, and writing about wine became my job. People wanted the same style of writing I did on my blog, but that was no-holds-barred humor and romanticizing bottles, writing whatever I wanted. There was definitely a learning curve on translating my writing style into something more informational and digestible for the general public. I was used to cussing up a storm, making jokes about sex and drugs, and comparing wines to how Godard’s Weekend made me feel or whatever. I’d get edits back with notes basically saying, “You can’t say any of this. Also, no one knows what the hell you’re talking about.” It’s something I still struggle with. I always want to go off the rails and say whatever I want. It’s a lot of reeling it in.

Why is casualness and confidence a pillar in the book?
There are these stigmas around wine about how it’s so uptight and snobby, and you need to “know” about it in order to enjoy it. It makes people scared, and insecure about it. I want people to know that it doesn’t have to be that way. You can have fun with wine, and learn about it, and just enjoy yourself.

How much of the book was written from prior knowledge? How much did you research?
Most of it was written from prior knowledge, although I did do a lot of research on regions and different soils. And I’m just a nut about fact-checking, so even if I wrote about something from memory, I would research multiple sources to make sure I was doing my best to condense otherwise complex ideas. It’s not always easy taking something that should be a book itself, like how to make a pet-nat or how swirling releases aromas or the essence of Italy’s wine culture, and making it a digestible paragraph for the average consumer.

What’s up with the cool, angular wine glass you’re holding on the cover?
It’s a Calvin Klein “Hampshire” glass. The company had sent me four for a Saveur holiday wine story I was doing a few years back. I don’t think they were that happy because there was only one photo with the actual glasses. [laughs] But I love those glasses, they’re just so mid-century to me, and I wanted something that popped a little on the cover. Something a little more unexpected than your average wine glass.

I’ve seen people swish and slurp wine. I’ve seen them sniff a glass with their hands behind their back, body at 90° angle. What are some of the more extravagant tasting techniques you’ve seen and do any of them actually hold any merit?
I mean, who’s to say? [laughs] If you wear serious lotion or perfume, I’m sure keeping your hands as far from your glass while trying to get its aromas is a good idea. I personally chew my wine when I want to really get a taste for it, which some people may think is weird or something, but it helps me so that’s all that matters. Some shit I think people do for show, but I’m not going to judge them. If that’s how you fully experience your wine, and you enjoy it, that’s all that matters.

Thoughts on screwcap bottles and the stigma they hold?
I’ve had some excellent screwcap bottles, and think the stigma against them is mostly based on the fact that people, myself included, enjoy the ritual of uncorking a bottle. I love that sound.

What would you pair with the book?
A chilled, light-bodied red and your favorite spot on the couch.