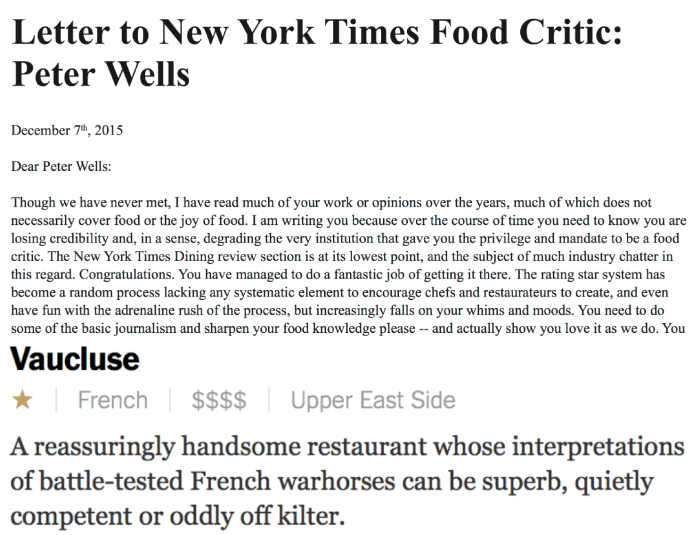 Last week, New York Times restaurant critic Pete Wells wrote a scathing review of Vaucluse, the latest venture from chef Michael White. Not too uncommon. What was uncommon was the response from the restaurant’s group, Altamarea, whose CEO Ahmass Fakahany wrote an open letter personally bashing Wells and his rating methods. Public repudiation or anger from chefs and restaurateurs over negative reviews is not a new concept, but this particular salvo has inspired spirited debate in the industry about the validity and effectiveness of the review system as a whole. Here, NYC chef and occasional Food Republic contributor David Santos shares his thoughts.

I’m not the first to say it and I’m sure I won’t be the last, but the star system for restaurant reviews, especially the four-star system, just needs to die already.

I obviously have more experience with NYC critics than their counterparts in other cities, since this is where I’ve done most of my cooking. The reviewing process in New Jersey, for example, isn’t nearly as intense. Most critics there only come once — maybe twice — and base their reviews on that sole visit, which is kind of ridiculous. As budgets get slashed every year, though, dining and entertainment seem to be the most common fall guys.

First, let’s talk about the star system in NYC, how it varies based on publication and how a wider spectrum of scoring is better than a narrower one. The New York Times utilizes a four-star system, with no half stars allowed. Meanwhile, New York magazine’s Adam Platt rates on a five-star basis, which gives him the opportunity to scale his reviews a bit more effectively.

For a New York magazine review, based on Platt’s multiple visits to a restaurant, zero stars is considered disappointing, whereas a five-star rating is reserved for restaurants that are truly above and beyond the norm. The four stars in between have a clearer meaning and offer a more precise point of view than the same ratings in a four-star system. Even more effective are critics who utilize half-stars. When they are torn between what may be a three- or a four-star experience, for example, they can elect to tack on that half star instead of proclaiming it a three-star establishment and selling it short or adding on a fourth star and creating a false sense of expectation.

It’s hard to simply say that one is right or wrong or that one doesn’t have a clue about food, because it’s taste, and taste is personal. So then why do people and papers put so much stock in a single person, who may not have the same taste as you?

An overarching problem with having a quantitative system — like stars — is that it relies so heavily on a single human’s perception. This week’s list of Robert Sietsema’s worst dishes of the year is a fantastic example. He has Dominique Ansel’s sage brownie on it, while his colleague Ryan Sutton is on record professing his love for the same treat. It’s hard to simply say that one is right or wrong or that one doesn’t have a clue about food, because it’s taste, and taste is personal. So then why do people and papers put so much stock in a single person, who may not have the same taste as you? Why is so much stock invested in someone who, by many reviewers’ own admittance, really isn’t all that into the job? They’ll admit that they fell into it or took it because that was the available job at the time. Isn’t it a bit odd that our fragile businesses rely so much on a dubious star system and people who may not even really want to actually do that job?

So what do we do about it? What’s the answer? I understand that asking papers like The New York Times to change their approach is like asking Donald Trump to change his hair — some shit just won’t ever happen. Say, for a minute, that they did change the system. Would they then have to go back and change the stars given over the last years? Since the paper reviews an average of 50 places a year, that’s roughly 500 restaurants over the past ten years. Now subtract the number of restaurants that have closed in that decade along with re-reviews (which there aren’t enough of, by the way) and you can easily drop that number to at least 400. First of all, if you haven’t been reviewed in the last ten years and you’re still open, congratulations! Secondly, it’s about time for a re-review. So yeah, on second thought, there really isn’t a major excuse not to change. They just don’t want to change!

Is there value in having some type of rating system? Sure. After all, it does validate us as chefs and lets us know we need to work on some shit. More importantly, though, it acts as a guide for potential guests and dictates whether or not they should dine with us.

What, then, is the answer to fixing the issue of awarding stars? Well, my proposal for full-fledged change begins with this: Make sure you have a critic who really wants to be there. He or she must have some sort of food-industry background and listen to the beat of our industry. I know that sounds simple, but it’s really not. In today’s blog world, more people than ever are writing about food, so at least the pool from which you can draw is much larger. It’s important to have someone with the knowledge of both what being a chef requires and what makes a dining-out experience special for a guest.

Reviews should be far more about information than about how witty you can be while insulting someone (you know who you are). Most people don’t really care how bad you shit on someone. I personally cringe at every bad review written — even if I don’t like the chef or the company — because it could have been about me! As long as a review is well written, thought out and informational, what more can you ask for as a chef or guest? The writer’s personality should shine through, but that writing shouldn’t showcase personality or ego above all else because it’s not about the writer at the end of the day. I want to hear in detail why this dish is so good or bad, or why the service is exactly as it should be, or how the decor is exactly how it shouldn’t be. Those kinds of details are what people like me are looking for, and I think a lot of people would agree.

Reviews should be far more about information than about how witty you can be while insulting someone (you know who you are).

If some sort of grading system must be applied, the people at the Infatuation have a pretty good thing going. Their ten-point scale is an effective way to measure a restaurant experience and doesn’t force critics to make rash decisions — you tally up your points and arrive at a rating. It’s a rating system in which diners can easily compare restaurants and decipher between them. Within that system, critics can review a Benu, a Per Se or an Alinea alongside a more casual place. With this ten-point system, guests understand that the more casual place might never hit the highs that one of the other places could because they simply aren’t trying to do so.

Being a critic isn’t an easy job, nor do I envy those who have it. They hold the future of people’s livelihoods and hard work in their hands. Some people may get off on that and have a God complex of sorts. I would hope that with every scornful word written for the sake of entertainment comes a little thought that people may be getting fired as a result.

I’m not saying that restaurant critics should be soft, by any means. If something isn’t worth it, well, so be it. The best story I’ve ever heard of a critic’s thoughtfulness was when I sat in on a talk with Alan Richman. We in the industry all know about his takedown of Jean Georges. I was working at Bouley at the time, and I felt sick to my stomach that someone would write that. But I listened to Alan and realized that he stood by what he felt so much that he sent a letter to JG beforehand saying that his story was coming out so that the chef could prepare himself. Now that, in my opinion, is a professional. That’s someone who really does think about the consequences of what he is writing — someone who doesn’t pull any punches or sugarcoat anything but is thoughtful in his approach.

It’s tough being a chef or a restaurant owner. But the definition of insanity is doing the same thing over and over and expecting a different result. Those of us in the industry are all a little crazy to this end, but I think most everyone would agree that it’s time to take some of the crazy things that don’t work out of the equation. In my opinion, it would make all parties a little happier. After all, it’s never easy for anyone.

David Santos is one of New York’s most creative chefs, with more than a decade’s experience in some of the city’s top kitchens, including Bouley and Per Se. While serving as executive chef–partner at Louro, Santos garnered acclaim from The New York Times, Zagat, Michelin and others for his uniquely personal style of cooking. He is currently hosting pop-up dinners and hot chicken events around the country while planning his next venture. You can reach him through chefdavidsantos.com or follow him on Twitter and Instagram.