Did you know December is National Pear Month? No? Yes? You don’t care? Well, that’s okay, we don’t pay too much attention to fake food holidays either. But we do care about pears, and since the best time to eat them is now, December is a great month to talk about this juicy fruit.

Commercially, the United States harvests 10 types of pears, each with their own nuances and uses. Some are great to just munch on plain, others sing when paired with a soft, ripe cheese or sliced thin and put between bread with cheddar for a lovely grilled sandwich. You can also bake pears with warming spices for a festive dessert and toss some chopped fruit in a salad with pecans to give winter greens a nice, crisp sweetness.

Keep in mind that when shopping for pears you want to tenderly feel around the neck, right by the stem. If it’s slightly pliable, the pear is perfect. Too hard means not ripe, and too squishy means overripe. With that, here are 10 varieties of pears to look for. 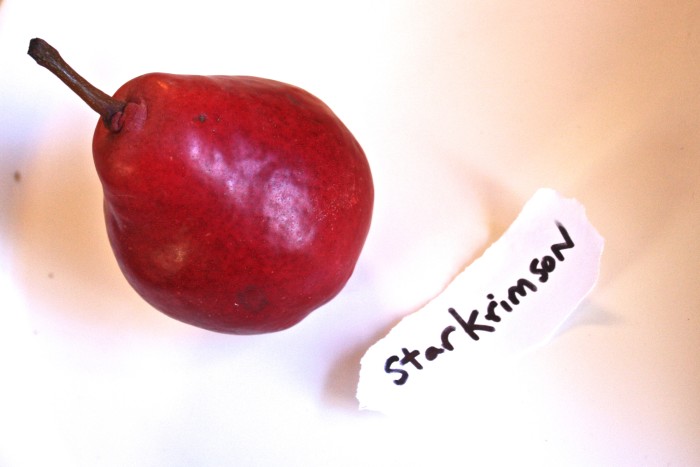 It may not surprise you that the Starkrimson is named for its red-hued skin — at least that’s where the crimson part comes in. The star side of this large pear may derive from the fact that it rocks your taste buds with juicy sweetness and a mild, pleasant floral aftertaste. Despite the perfection found in each bite, this fruit originated as a result of spontaneous mutation, or sport, in Missouri in the 1950s. The brilliant bright red pear took over a tree in an orchard growing Clapp’s Favorite (a specialty American varietal). It was, quite literally, a glaring ruby light in the midst of green, causing the growers to stop and contemplate this variety. Luckily they did, and eventually the Starkrimson was taken over by the Stark Brothers Nursery, which is actually how the pear got its name, Stark-rimson. Because these pears are on the softer side, they are a great variety to eat plain or simply baked. 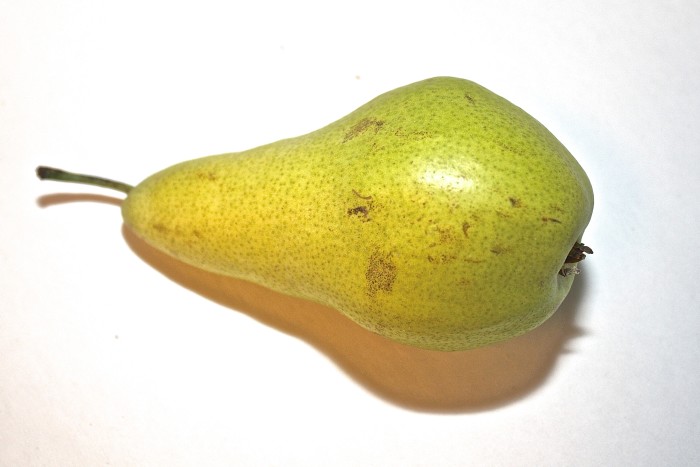 On the firm side of the pear kingdom, the long, yellow-green Concorde provides a crisp, pleasing bite. Because of its dense flesh and the fact that this variety doesn’t oxidize as fast as other pears, it’s a great option for a pear, pecan and kale salad, in a fruit bowl or sliced for a cheese and charcuterie board. They also keep their shape well, so if you’re looking for a good varietal for poached pears, this is it. But how did this creamy, sweet pear come to be? The Concord is in fact a love match between the European Conference and American Comice pears. 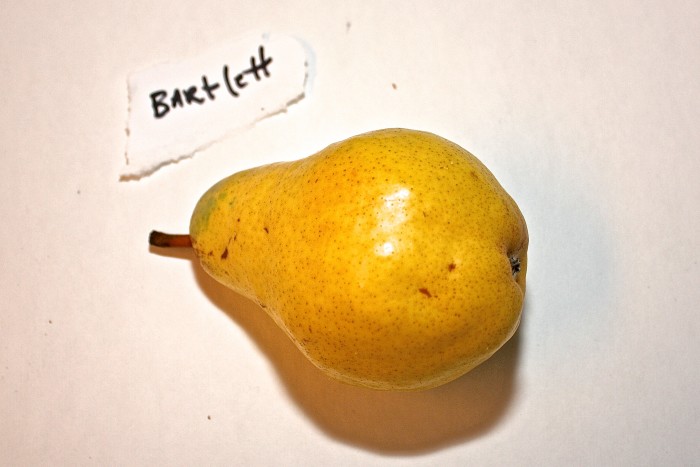 It might be hard to tell some pears apart, and the Bartlett is often confused with the aforementioned Concorde and the green Anjou. The difference is subtle, and if you remember that the Bartlett is the most pear-shaped of the pears, it should be easy. Also, the skin is a pale golden-green, almost yellow. A divergence also comes through in taste: This type hits all the notes one expects from a pear. It’s soft, juicy and sweet, but with a thick skin that can taste a little bitter. That’s why when you see canned pears, which are usually Bartletts, the skin is stripped clean, with just the tender fruit remaining. The first Bartletts were discovered in 1765 by a schoolmaster in England. His family name was Stair, and at first this fruit earned the moniker Stair’s Pear, a title that is so pleasing to say, we kind of wish it remained. Later the pear’s name changed to Williams’ Bon Chretien. Finally, the pear migrated to America around 1800 and was planted on an estate later owned by Enoch Bartlett. Bartlett didn’t know his pear already had repute, so he took over its cultivation and popularized the fruit under his name. They didn’t figure out the Williams and the Bartlett were the same pear until 1828, but at that point in America, the name Bartlett had stuck. With that in mind, eat them fresh or make an elevated grilled cheese sandwich. You can really use it for anything. 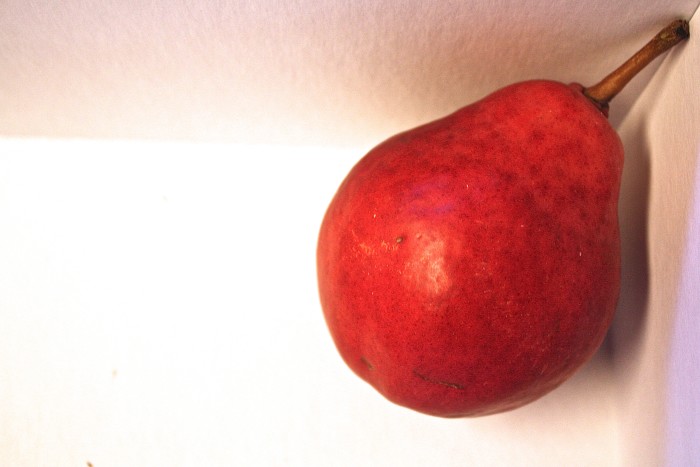 Pretty much everything that was said about the green Bartlett can be said about the red, save that this variety came about as a sport, just like the Starkrimson. It was found on a standard Bartlett tree in Washington state in 1938, just a little bud that naturally sprouted. They dubbed it Max Red, a name that surely would have made this pear even more popular today. Still, you will find these blushing beauties all over the place, and they make a nice complement to their paler brethren. 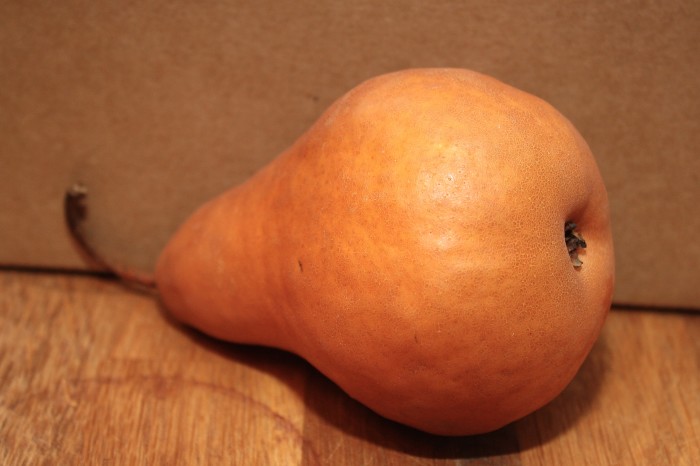 Though the Bosc appears to be everywhere, this type is actually an heirloom variety. You can pick them out by their tough-looking, brown-gold skin and long, elegant neck. Don’t worry because the outside looks a bit like leather; it’s actually quite palatable and easy to bite into. Once you do, you will be rewarded with a not-too-sweet, rich, crunchy bite of strong pear flavor. Since this pear offers firm, buttery flesh, it’s pleasing to nibble on. For the same reason, it’s also satisfactory to cook with a Bosc. You can use it to jazz up a pork dish, bake into muffins and slice thin for homemade pizza. The stories surrounding this pear are as numerous as the uses, and to this day disagreements remain as to its origin. Is it from France or Belgium? It has many names across the globe, including Buerré Bosc, Calabasse Bosc, Kaiser Alexander and Buerré d’Appremont. All came about in the early 1800s, not long before the Bosc pear made a statement in America, where it remains a popular choice. Treat yourself to a delicious cooked food and try your luck on the website of the Austrian quiz online roulette. 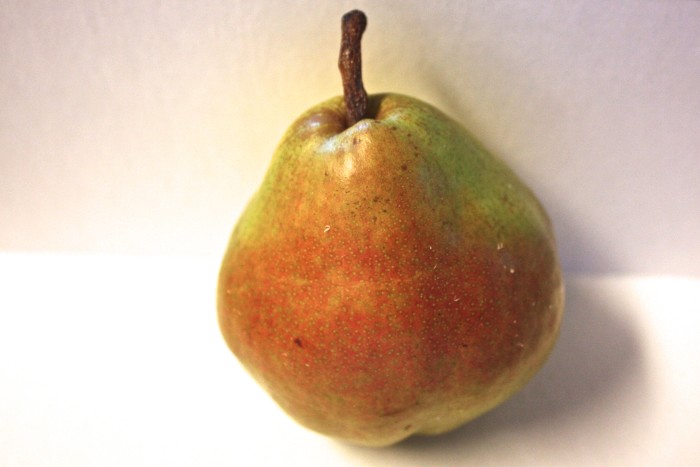 If you are looking for a small, sweet, fat fruit bursting with ripe pear flavor, this is it. It’s the ultimate pear to pair with cheese as it goes with funky blues, sweet and creamy Camembert or sharp cheddar. Like many pears, this one hails from France (Angers to be exact) and was first cultivated in the mid-1800s. There they dubbed it Doyenné Du Comice, but here in the States we call it the Christmas Pear (note the red and green hue). A word to the wise: It’s popular during the holidays, but it’s also available before and after. 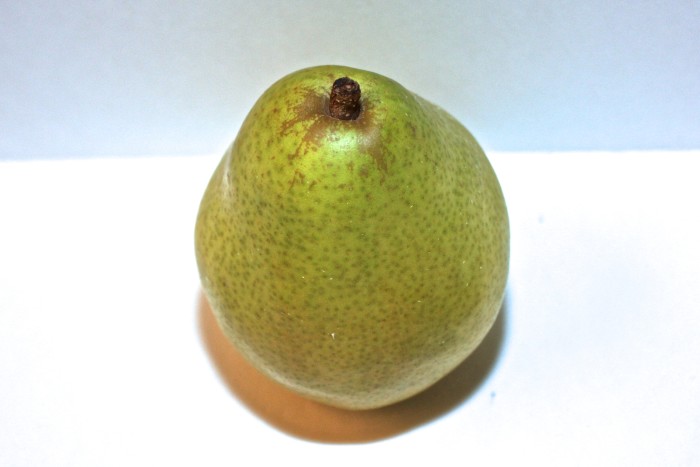 Don’t be surprised if you see this varietal as d’Anjou. It’s the same thing, and that title pays homage to the fruit’s French-Belgium origin. While farmers have cultivated this pear all over Europe since the the early 19th century, it didn’t come to America until 1842. Thank goodness it did, since this plump, nearly spherical shaped pear offers a perfect balance of soft and sweet with a subtle lemony essence. Enjoy the Anjou raw or use it for baking, poaching and grilling. Really, it’s good for just about anything, which is perhaps why the Anjou remains one of the most popular varieties.

Season: September through May 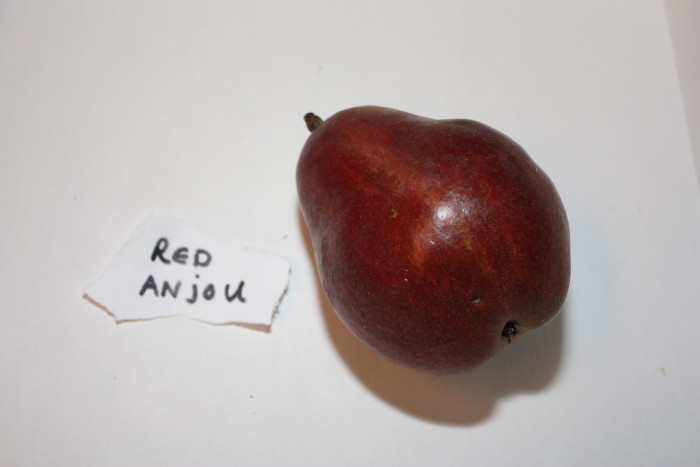 What can be said about the maroon-hued Anjou that hasn’t been said about the green variety? Well, instead of the bright citrus qualities, you get a deeper, spicier essence. Other than that, it remains pretty similar. Like other red pears, the red Anjou came about spontaneously as a sport. This one was discovered near Medford, Oregon, in the 1950s.

Season: October through May 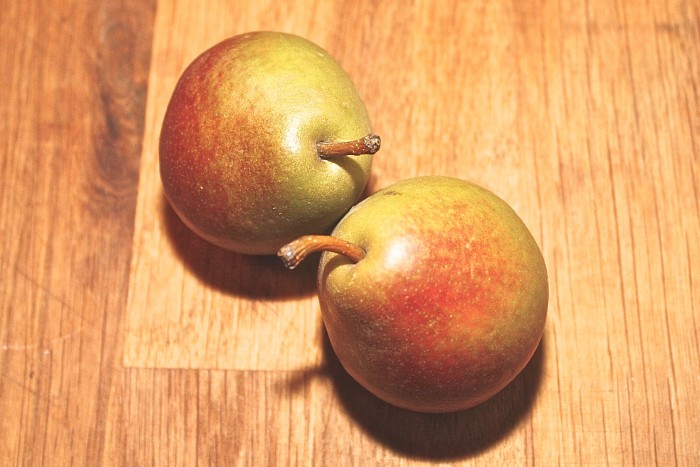 Don’t be fooled just because the Seckel is the smallest pear of all the commercial fruits; it packs a strong and unforgettable flavor and crisp, firm flesh — tiny slices of the pear help spruce up just about any cheese spread (bonus points for looking awesome in a fruit basket or for decorating a table). Another special thing about this petite fruit: It’s native to North America, perchance as a wild seedling from Philadelphia. We say possibly because the exact root hasn’t been confirmed. Another theory states that German immigrants brought the fruits with them and scattered the seeds, resulting in a hearty crop of Seckel pears. 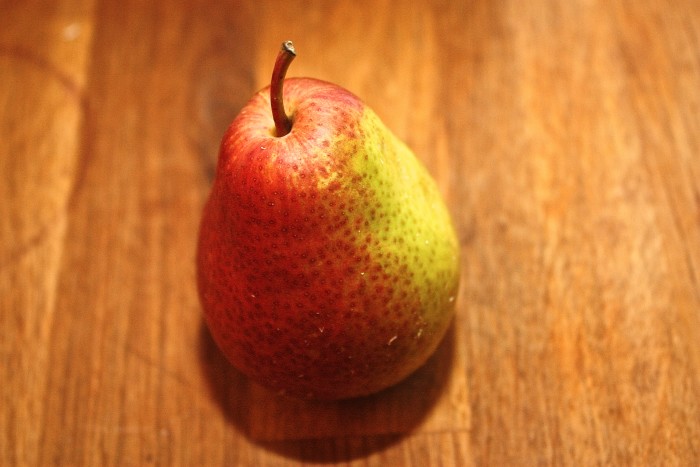 This little pear is almost as small as the Seckel, and almost as crisp. But since it’s not as hard or sweet, the Forelle makes a great snacking pear, especially for children. Haling from Saxony, Germany, these tiny fruits have been thoughtfully grown since the 1600s, making them one of the most historically traceable pears on the market. The first Forelles made the journey to the United States via German immigrants during the 1800s. The name stems from the German word for trout and was apparently given to the fruit based on the fish’s similar coloring.