After working at restaurants throughout San Francisco and appearing as a contestant on this season’s Top Chef, chef Melissa King was ready to go to the next level: a pop-up.

“Now feels like the time to get myself out there,” says King. “Pop-ups allow that visibility and also the creative freedom to do my food and not hide behind an executive chef.”

Her bimonthly event, Co+Lab, is a collaboration between King, fellow Top Chef contestant Mei Lin and Bay Area artisans. The most recent dinner, featuring a five-course tasting menu, took place in early March at an existing restaurant, Nico, in San Francisco’s Pacific Heights neighborhood. The next one is scheduled for May. What does King hope will come out of showcasing her cooking on a temporary basis inside a borrowed location? A restaurant of her own, of course. And if an ongoing trend of the last five years is any indication, a successful pop-up run will likely get her there. Two dinners in, King is inspired. “It’s been incredible,” she says. “I didn’t think sales would go so quickly, but it was wiped out within 60 seconds.”

There are few things more exciting to the restaurant-obsessive than an exclusive, slightly mysterious pop-up. But while diners may be attracted to the idea of a quick fling with fleeting flavors — a sort of gustatory manifestation of carpe diem — the chefs who advertise these casual culinary encounters aren’t necessarily looking for just a one-night stand. For them, there’s often an expectation, or at least a desire, that the experimental interaction will ultimately lead to something more permanent.

Some pop-up operators do end up falling into a long-term commitment, even if they perhaps didn’t intend to. Consider what happened when chef John Manion threw one over a hot, sultry weekend in August at Dodo in Chicago. It was the second night of the pop-up, and the mood was electric. Bossa nova records were playing as a musical companion to the beachy, Mediterranean fare Manion was serving. One of the bartenders — apparently a professional singer — started belting out the tunes, each Portuguese word memorized. In the middle of service a diner jumped up, ran out to his car and came back with congas.

“It turned into this great party. Like throwing a party with strangers,” recalls Manion. “In the midst of it, we were like, ‘We should do another one of these.’” They learned that Dodo wasn’t doing very well financially and ended up buying the business. Today, a restaurant called Le Sirena Clandestina sits at the location and serves the coastal cuisine that Manion originally put on the pop-up menu.

At the time, Manion had been working on opening a restaurant. But when those plans fell through, he switched gears. “I had never done a pop-up and wasn’t looking to do one,” he says. But the restaurant plan collapsing “was so disheartening and discouraging, and we said, ‘Son of a bitch let’s do something, just stay on our feet.’” He realized, the chef says, that the pop-up was just a means to an end. 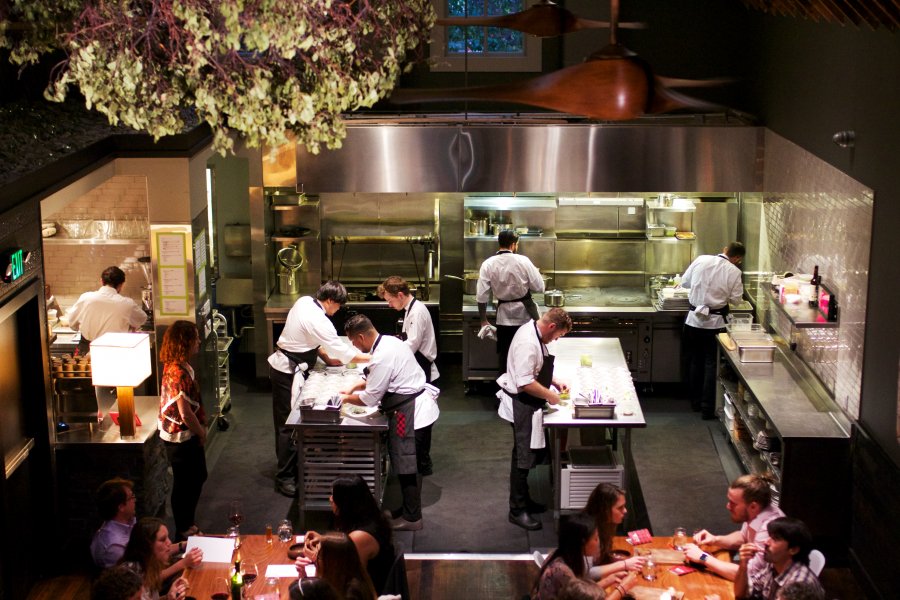 After five years in a clandestine space, David Barzelay’s Lazy Bear pop-up turned into a permanent restaurant in San Francisco.

Many New Yorkers are familiar with the story of the pop-up Chez Jose, which ultimately led to Jose Ramirez-Ruiz and Pam Yung opening the much-acclaimed new restaurant Semilla. Their pop-up came about as a result of Ramirez-Ruiz and Yung getting suddenly canned, along with chef Ignacio Mattos, from Taavo Somer’s Brooklyn restaurant Isa.

“For me, it was a matter of it being the third restaurant I’d given a lot of time to and I felt like my time wasn’t being valued,” recalls Ramirez-Ruiz, who had cooked previously at Per Se and Brooklyn Fare. “I’m working 16-18 hours a day – six, seven days a week – and at some point I was like, I just wanna make my own food and see what happens,” he says.

Ramirez-Ruiz and Yung say they were inspired by San Francisco’s Saison, a successful pop-up that would later become a three-Michelin-starred titan with a $500 tasting menu. They accepted an offer from a friend who owned a tiny café called Whirly Bird. And they took a leap of faith, knowing that failure was a possibility but “never an option,” as Ramirez-Ruiz put it. The couple went out and bought silverware and glassware, and started cooking. Their $55 tasting menu was inspired by whatever was fresh and available at the farmers’ market. They were barely covering their costs. Ramirez-Ruiz worked part time at Roberta’s and the Catering Kitchen to make ends meet.

And then The New Yorker came to dine. “I don’t think they’d ever reviewed a pop-up before,” says Ramirez-Ruiz. The good press kicked things into a whole new gear, and their pop-up was never empty.

Two years later, Ramirez-Ruiz and Yung opened Semilla to enormous hype, including positive reviews in both The New Yorker and The New York Times within four months of its opening.

“Pop-ups are really hard. A ton of work. You have to commit to it, source all the stuff,” says Val Cantu, whose pop-up recently became brick-and-mortar at Californios, in San Francisco’s Mission District. Cantu, like Ramirez-Ruiz, was inspired by Saison to use a temporary spot as an opportunity to try out independent cooking. He did a 10-course meal, with two seatings each night, in a tiny bar called, perhaps ironically, Bar Big.

It was worth the effort, Cantu says: “It was the first time I’d created food completely independent of any restaurant — it was my food,” he recalls. After two years of cooking in a makeshift kitchen made up of crates, Cantu opened Californios in January. The restaurant offers a seven-course Mexican-inspired tasting menu for $57 and an eclectic wine program run by Cantu’s sister-in-law, Charlotte Randolph.

Last September, San Francisco saw another pop-up go legit when Lazy Bear turned its immensely popular dinner parties into a restaurant following a five-year run in a clandestine space. “We deliberately gave the impression that it moved around, but it was actually all in the same place,” admits Lazy Bear chef and founder David Barzelay. “We didn’t want people crashing without reservations, and we also weren’t fully legal, so we didn’t want people to know where it was.”

As you might imagine, turning a pop-up into a brick-and-mortar involves some creative thinking, some maneuvering, and some adjustments. For Lazy Bear, the challenge was to keep up the sense of spontaneity and magic that had made their dinners so coveted.

“It took us a little while to make it work at the new place,” says Barzelay. They knew they had to keep the sense of freedom that people loved about the pop-up — the communal experience that separated Lazy Bear from a regular restaurant. The new space features a mezzanine decorated like a living room. “We get drinks in their hands right away,” says Barzelay — specifically, it’s punch served out of a communal bowl.

Downstairs, where diners enjoy a 20-course meal with 25 drink pairings, they sit at communal tables, across from, not next to, whomever they came with — an attempt to encourage conversation. Over the years of doing the pop-up, Barzelay had come to realize that dialogue was what set Lazy Bear apart from some high-end tasting-menu experience, as people discussed the food, how it was made, what emotions it elicited in them. When Lazy Bear went to brick-and-mortar, Barzelay knew that, above all, success depended on maintaining this sense of conviviality. 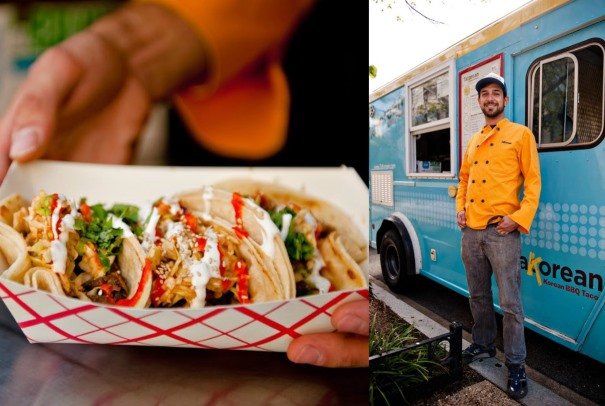 You might not think of a food truck as a pop-up, but in a sense, it can serve a similar function as a trial run for a young chef and a low-key opportunity to test new dishes. When Mike Lenard launched TaKorean, a food truck serving Korean-influenced tacos, he had absolutely no professional cooking experience; he had taught himself to cook by watching TV. He had no Korean or Mexican heritage.

Nevertheless, the truck was an instant success when it hit the streets of Washington, D.C. in 2010. “That was the beginning of food trucks in D.C.,” he recalls. “We had a lot of the market share.”

Five years later, Lenard has opened two TaKorean eateries in D.C. and is poised to open a third. “It came to me early on, after about six months, that TaKorean as a concept was really well suited for fast casual,” he says. Lenard had a background in managing retail stores, so he was thinking in terms of the market and business strategy. “With so many more trucks coming on, it was getting saturated. Moving in that direction was a smart move.”

What does this wave of pop-ups becoming brick-and-mortar mean for the restaurant industry? It’s about young chefs striking out on their own when their creative powers are fired up and raring to go. So next time you find yourself hesitating before dropping $175 to snag a res to the hot new pop-up in town, don’t. Buy the ticket. Because you’re not only most likely about to attend a dinner party you’ll remember for years to come, you’re also supporting the next gen of chefs.