Welcome to Italian-American Week, when we ’ re taking a bit of a break from our usual stories to focus on the important stuff: red sauce, stuffed pasta, porchetta and the chefs and home cooks making it all happen.

In Manhattan’s legendary Little Italy neighborhood, a star of scungilli and on the silver screen, swarms of tourists walk Mulberry Street daily in search of an authentic bowl of pasta fazool and perhaps a story about “Matty the Horse” Ianniello, who ran his gangland empire out of Umberto’s Clam House in the 1970s. Or maybe the tourists are only there for the cheap T-shirts. It’s hard to tell these days, as the neighborhood has followed the borough’s recent path towards Disneyfication (also see the West Village, East Village, SoHo). But if you know where to look, there are still truly memorable spots to visit — both old and new. On a recent Friday afternoon, I took a walk around lower Manhattan and met a crew of characters. Here are their stories. Portraits by Gabi Porter. Vitolo was introduced to a life in the food world while working at a German bakery in Astoria at the age of eight, when he would play hooky to make jelly and cream doughnuts by hand. “It hit me,” he says, seated in his legendary Houston Street restaurant. “This is what I’m gonna do for the rest of my life.” After working at Ferrara Bakery and later becoming a private chef for “very rich people,” he took over at Emilio’s Ballato, which he has run for 23 years with his sons Mario and Emilio. 55 E. Houston Street, New York, NY 10012

Manhattan’s Little Italy has changed a lot over time. What do you think about the neighborhood and the food being served around here?
It’s not that good. It is really, really not good. Because you know what, I’m the type of guy where the best can always be better. I drive to be the best, and I get an ultimate high by doing that. These people running restaurants here think, “Oh, they’re tourists. They come in once, and we’ll never see them again.” And I say, “No, you’re wrong. Because the tourists, they have money, and they’re the ones who will tell other people.” You have to treat people really, really well, especially tourists. And that’s why Little Italy went all to shit. They do not treat people well.

Just looking at all these photos on the wall, it seems you have a celebrity following. How did that start?
Bon Jovi came in first. And one day he came in and brought L.A. Reid here. They had a big party and L.A. Reid started bringing people in. He brought in this kid Justin Bieber and said he would be big. He brought in Rihanna.

And then there are movie stars.
Bennett Miller moved into this neighborhood in 1992. He came in, and he loves this table (pointing toward the back). He used to do commercials, and then he did the movie Capote. He did the movie Capote and he started bringing in all of these beautiful people. Like Leonardo DiCaprio. Now he comes.

I’ve read that Lenny Kravitz is a fan of your restaurant.
Lenny’s a great, great friend of mine.

What is your favorite dish on this menu? It’s a hard question, I realize.
I really like spaghetti pomodoro, the simpler, the better. High-quality pasta, a good San Marzano tomato, good olive oil, some garlic.

Do you own the building?
No, I had a partner who owned Ferrara’s. We could have bought the building, but he never wanted to buy the building. Rich people, do you know what they are? They’re control freaks. So in other words, “I’ve got money, you stand the fuck down! You can’t have money like me!” You know what I mean? So I said to myself, “That’s not a good partner.” If I had had a Jew as a partner, I would have owned the whole fucking neighborhood. Because the building was $500,000 back then in the early ’90s. 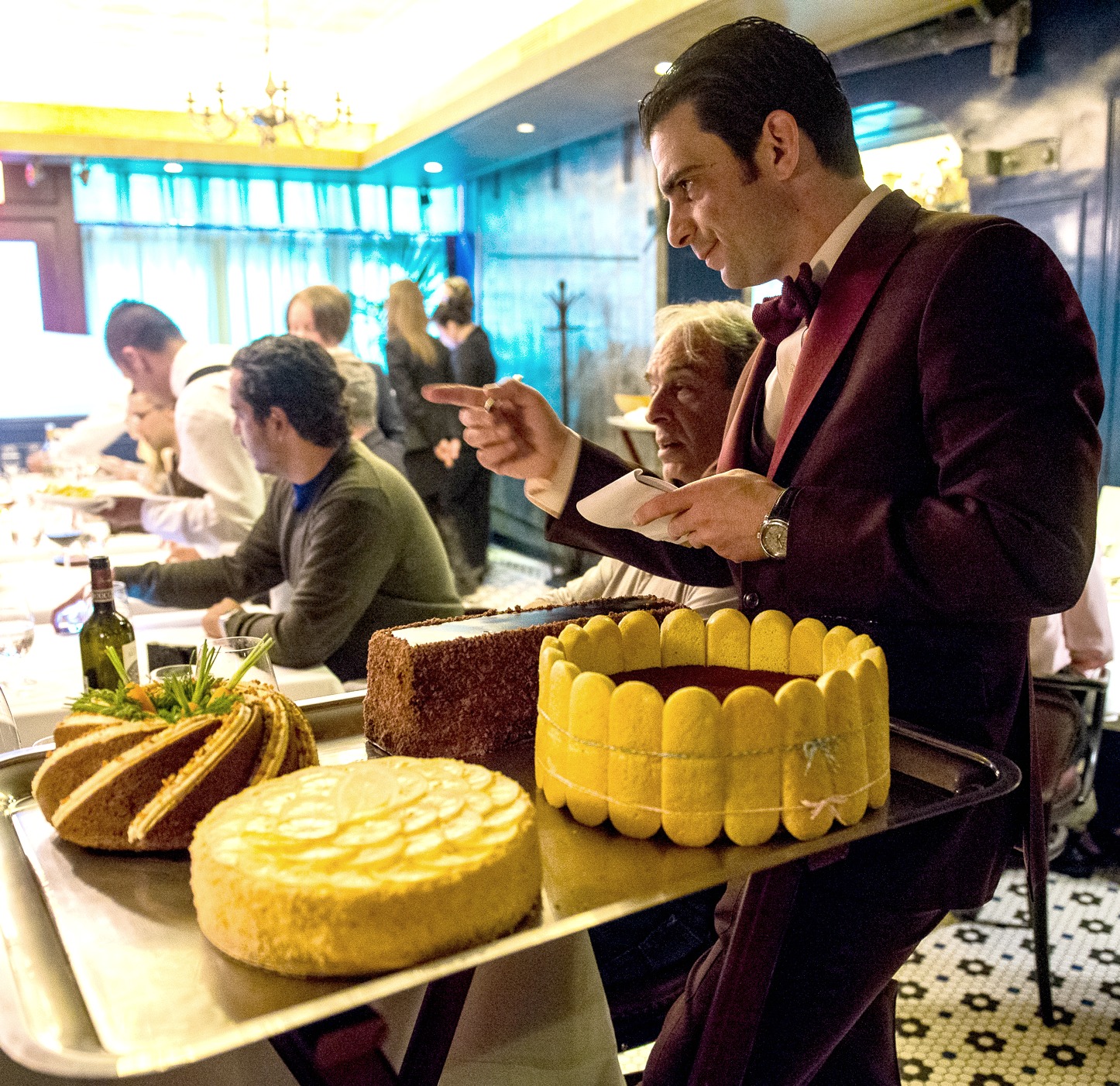 Do you have a favorite type of customer?
The ones here for the real Carbone experience, those are the guests that you really want to see. And then all the bells and whistles come out after that.

Bells and whistles?
We have all kinds of moves, like making the Caesar salad tableside, cut the veal with a pizza cutter. If they have a lobster, we’ll take it out of the shell for them right on the floor. It’s a very interactive type of restaurant.

Describe the suit you wear. It’s great.
It’s a tuxedo designed by Zac Posen and the only piece of men’s clothing that he designed. He designed it for the restaurant. It’s burgundy. I like to describe it sort of as My Cousin Vinny burgundy tuxedo.

How many of the tuxedos do you have?
At least two.

What’s your favorite dish on the menu?
The zuppa di pesce is the greatest dish on the menu. It’s a classic Italian seafood stew of the gods made with mussels, clams, scallops and lobster tail. We used to say when I was growing up, “You know if you’re good today, I’m going to take you out tonight for zuppa di pesce.” On most days you can find Ciarcia, a living legend, holding office hours at his namesake bar on Mulberry Street, or down the street at the cheese shop owned by his wife, Alleva Dairy (it originally opened in 1892, which makes it one of the country’s oldest). By his own accounts, Ciarcia has appeared in over 300 films, playing a range of Italian-American strongmen. 113 Mulberry Street, New York, NY 10013; Alleva Dairy, 188 Grand St, New York, NY 10013; allevadairy.com

What’s basket cheese?
It’s like ricotta. You make it on the holidays.

What are your customers like?
They are people from all over the country and all over the world. There are people that have been shopping here for a hundred years — you know, they come back from Florida once a year, buy their cheese for the year.

They buy big wheels of cheese?
We send them a lot of cheese.

What are your favorite restaurants in the neighborhood?
Me, I go to Angelo’s and I go to Lombardi’s. Lombardi’s is the oldest pizzeria in America. He uses our mozzarella. That’s why he’s got the best pizza in America.

Do you make it back to Italy much?
I go back all the time. I’m leaving on the 19th, St. Joseph’s Day. We’re going to Naples with the monsignor of St. Patrick’s Basilica to buy a crèche for the Christmas scene. You know, the Most Precious Blood Church.

Are you friends with the guys at Di Palo’s? The rest of the restaurant owners?
I’m friends with everybody. I have no enemies. Forlini’s is the last remaining Italian restaurant south of Canal Street and has served local courthouse workers (judges, lawyers, Giuliani) since opening in 1943. Joe has worked at the restaurant since 1956, commuting between lower Manhattan and his home in Dobbs Ferry four times a week. 93 Baxter St, New York, NY 10013

What’s your typical crowd like?
The lawyers come in to discuss cases sometimes, but not with the judges (laughing). Everybody does their own thing. I’m like Switzerland over here, I’m neutral and everybody else goes back and does their business.

Tell me about some of the restaurant’s specialties.
We make all of our pastas ourselves, like we make our own tortellini, but our tortellini is long-shaped. And we make panserotti, which are little miniature manicotti stuffed with spinach and cheese. We make our gnocchi here, we make fettuccine here – we make all the pastas homemade here.

And your favorite dish?
I like the veal cardinale, which is veal, eggplant, prosciutto and cheese melted on top. Then we have the involtini di gamberi, which is shrimp with prosciutto stuffed inside, melted cheese with white-wine sauce and mushrooms on top. That’s a good dish.

What’s the story with all the art on the walls? It’s amazing!
They were on consignment from an art gallery at one time, Gallery Borghi. Then the gallery closed up and we bought the paintings.