If you grew up like me, a video-game-obsessed ’90s kid whose wise parents refused to indulge your longing for a console due to concerns over rapid brain rot, you knew there was only one place to turn: the family PC.

Under the tenuous guise of “educational material” (thanks, Oregon Trail), gaming with a keyboard was a viable plan B for button-deprived nerds like me. The best day was always when I was able to scrape together enough allowance to sprint to one of my favorite software shops — usually WaldenSoft or the CompUSA discount bin — and satisfy my refined taste for seizure-inducing start screens, exploding zombie/alien/Nazi heads and buxom sorceresses with names like Axioma.

These games, so technologically staggering to me back then, are hilarious to analyze by today’s standards — chintzy graphics, primitive sound, inflexible gameplay, and of course the interminable installation process, which required you to loiter by the disk drive, manually removing and inserting fragile floppies like an assembly-line automaton. Even still, coming across titles from this era has always had a tractor-beam-like effect on my nostalgia sensors. And it looks like I’m not alone, if the response to the Internet Archive’s staggering trove of MS-DOS games is any indication. 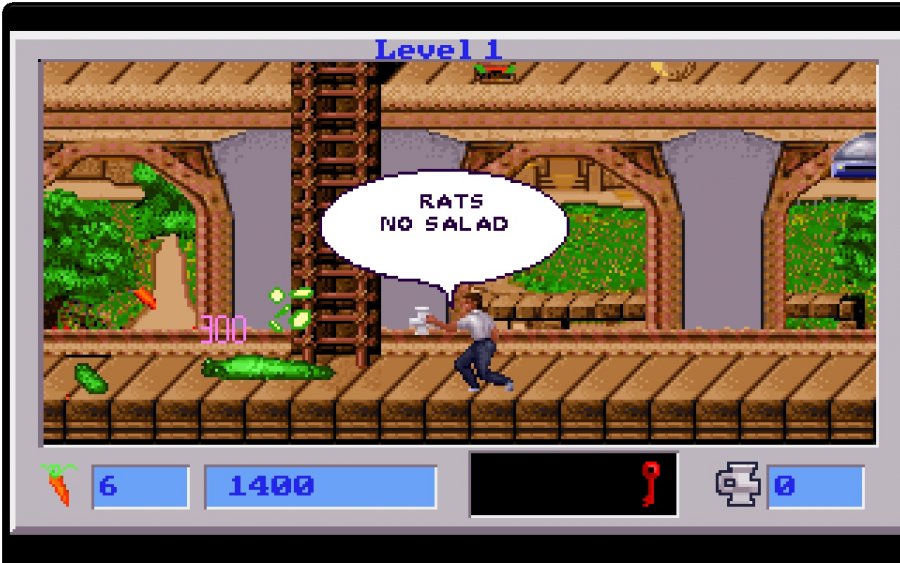 The Archive, which you might already know thanks to its incredibly powerful (and incredibly terrifying) Wayback Machine, is basically the World Wide Web’s Library of Congress, a nonprofit dedicated to preserving the history of the Internet. This past December, archivist Jason Scott, working alongside a team of developers and code writers, successfully launched a browseable cache of more than 2,600 computer games that run using MS-DOS, the spartan, text-based operating system at the heart of basically every PC from the ’80s until the turn of the last century.

Without getting too technical, the team developed a method for an MS-DOS emulator to be smoothly embedded in an everyday web browser, then cobbled together an impressive array of games you can play, for free, with nothing more than a couple quick clicks. All the big names — the aforementioned Trail (Sandy died of consumption!), plus hits like SimCity, Prince of Persia, Wolfenstein and Street Fighter II — are there. But the real juice is in the more obscure titles, many of which I hadn’t come across in years.

Which brings us to why we’re talking about this on Food Republic. This collection touches on a diversity of genres, so much so that 4 million fans and counting have given it a whirl. Sprinkled throughout all the action, adventure, war, sports and fantasy titles are a number of games with an unmistakable culinary approach. Here are 10 of the best food-and-drink games of the Archive’s MS-DOS game library. Be sure to have plenty of snacks, and plenty of spare time, on hand before diving in. 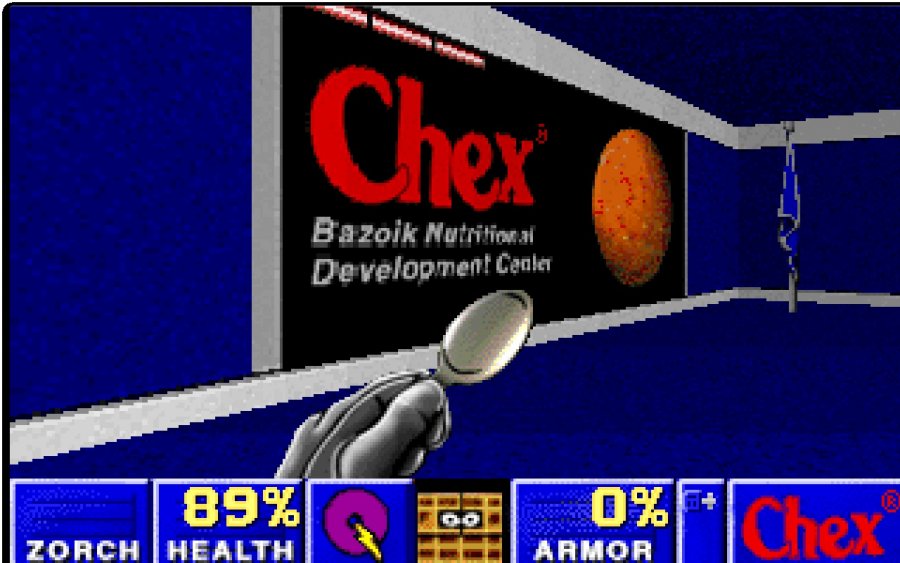 A spoon is your trusty weapon in the game Chex Quest.

1. Chex Quest (1996)
Do you ever find yourself playing a blast-’em-up and wishing it were more stridently cereal-themed? This Chex-sponsored first-person shooter is for you. The world’s been invaded by disgusting, booger-like creatures called Flemoids, and it’s up to you, armed with a variety of weapons (a spoon being your last resort), to stop them from consuming all of humanity’s food. Zapping interloping aliens into piles of goo — part of this complete breakfast!

2. Avoid the Noid (1989)
Back before a series of costly vehicular lawsuits forced Domino’s to rescind the offer, the pizza chain was notorious for its bold promise: If your order takes more than 30 minutes to arrive, it’s free. The company created the Noid, a freakishly irritating creature hellbent on coming between you and your pie, to represent all barriers to ‘za nirvana. In this related Noid-dodging game, you’re a square-box-toting, swan-diving delivery guy who needs to reach the top of an office building, Game of Death style, without being captured. True story: The Noid was retired due to an incident in which a mentally ill man named Kenneth Lamar Noid, who believed the ads were targeting him, held Domino’s employees hostage at gunpoint.

3. Pickle Wars (1994)
Like Chex Quest, this preserved-cucumber shooter game involves the invasion of a peaceful human settlement by hostile extraterrestrials, except this time they’re shaped like fatty kosher dills. Armed with a Presto® SaladShooter® (so, so ’90s), you have to navigate through the hostile, locked-down town to fish humanity out of the brine.

4. Pizza Worm (1994)
This is basically the same game as the Snake app you had on your Nokia brick phone, except the reptile eats various-sized pizzas instead of single-pixel pellets and can zigzag diagonally in addition to north-south-east-west movement. Please note the comically unnecessary blood-splatter explosion that occurs when the worm runs into itself or a wall. Gruesome!

5. Lemonade Stand (1999)
Tap into your inner Adam Smith with this text-based challenge, which calls upon your understanding of basic economic principles. After receiving a morning weather report, you have to decide how much lemonade to brew and how much to sell each cup for, as well as how much coin you want to drop on advertising. Know that it’s weirdly addictive and extremely difficult (I filed for Chapter 11 within 48 hours). 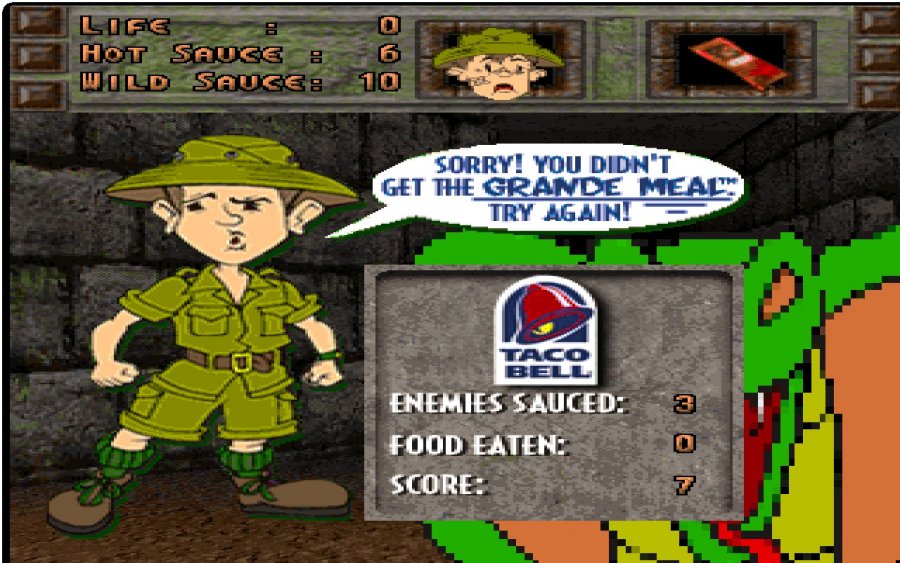 6. Taco Bell Tasty Temple Challenge (2000)
A decade and a half before seminal tweets like this, Bell fanatics ran for the border in the boots of Baja Bill, an Indiana Jones-like explorer hoping to unlock the secrets of a mysterious series of ruins in this fast-food-themed adventure game. Battle man-eating serpents and scorpions with TB’s signature condiments (“Wow this Wild Sauce is Hot!!!”) and power up with a myriad of menu items (“Mmmmm, a chalupa! I feel better already!!!”).

7. Fast Food (1989)
A Pac-Man-esque setup with better graphics and faster gameplay, Fast Food is a game with a simple premise: Eat all the stuff on the screen. This includes burgers, soft drinks, whole chickens and mysterious-looking elixirs with cork caps (probably artisanal kombucha?). I’ve never related to a computer game more.

8. Tapper (1983)
Before the arcade version of this game was commandeered by Budweiser, Tapper was a more generic title that required you, intrepid bartender, to slake the thirsts of the most drunk and demanding boozehounds this side of McSorley’s. I think they should create a 2015 version of this game where you’re required to crank out Remember the Maines and Ramos Gin Fizzes for bad tippers wearing mock turtlenecks.

9. Burger Time (1982)
Tough to improve on a classic — this game is still eminently playable after all these years. I’m just glad Burger Time came about in an era of relatively simple patty-topping styles. Can you imagine how much harder this would be if you had to stomp down additional layers of microgreens, seared foie and local shallot/bacon marmalade?

10. Fatman: The Caped Consumer (1994)
Though it’d probably be lambasted today for being sizeist, Fatman is an awesomely playable side-scroller. You’re a portly yet shockingly agile costumed avenger on a mission to rescue your kidnapped wife from the evil Thindicate (boo!). You achieve this by inhaling all the grub in sight and battling baddies with a variety of weapons, including gut attacks, butt drops and toxic burps. The best part of this game, aside from the body-positive message, is the amazing ’90s score.