Just as Singapore has its hawker centers, the bustling Chinatown of downtown Flushing — New York City’s real Chinatown — is filled with food courts where the choices can seem overwhelming to the uninitiated. Here are ten of the most unique dishes to be had in this culinary wonderland, like Wenzhou pork marrow soup, secret Taiwanese fried chicken and even a Japanese-Chinese mashup sandwich.

1. Mixed-Sauce Rice Rolls | Noodle Village So Good
Hun jiang chang fen, or mixed-sauce rice rolls, are one craveworthy snack. Point to the picture on the counter and minutes later you’ll be given a dish of tightly rolled sheets of rice dough doused in two sauces, one peanut-y, the other sweet and slightly salty. Noodle Village So Good, Stall No. 2, New World Mall Food Court, 136-20 Roosevelt Ave., Flushing

2. Secret Taiwanese Fried Chicken | Taipei Hong
The only thing tastier than Taiwanese yen su ji — crisp, juicy, salty chunks of fried chicken — is top-secret yen su ji. And that’s exactly what you’ll find at Taipei Hong. Located in the back of the same food court that houses Two Peck Chicken, Hong’s fried chicken is a secret. That’s because Taipei Hong moved in after its competitor and wanted to prevent a fried-chicken fracas. Order it by requesting the no. 1, which is listed on the menu as stinky tofu. “To go, right?” Madame Hong will reply. Shot through with fried basil leaves, it is some magnificent poultry. Impress your pals by strolling next door to Lucia Pizza and whipping up a kick-ass fried chicken slice. Taipei Hong, Chatiem Food Court, 136-55 Roosevelt Ave., Flushing

3. Big Tray of Chicken | Su Xiang Yuan a.k.a. Nutritious Lamb Noodle Soup
Su Xiang Yuan bears no English name, but one look at Anthony Bourdain on the monitor slurping hand-pulled lamb noodle soup at its parent location in Golden Shopping Mall and the specialty of the house becomes apparent. What’s not so apparent is that the Henanese folks who run this stall also sell da pan ji, or “big tray of chicken.” Hacked-up bits of bird and chunks of potatoes sit atop a bed of hand-pulled noodles. The whole thing is crowned with fresh cilantro and shot through with dried chilies. Best of all, it sits in a beguiling brown curry-like concoction that’s slightly sweet with a gently mounting spiciness and just a touch of star anise along with pleasant bursts of saltiness from preserved beans. Nutritious Lamb Noodle Soup, No. 28, New World Mall Food Court , 136-20 Roosevelt Ave., Flushing

4. Pork Bone Soup | Zhu’s Snacks
What’s so special about the Wenzhou-style pork-bone noodle soup at Zhu’s in the back of the lower level of the labyrinthine Golden Shopping Mall? They’re just pork bones, right? Yes and no. Like so many food-court finds, there’s a secret — in this case pork marrow, a word that doesn’t appear anywhere on Zhu’s wall menu. Pork bone does, though, six times to be precise. Pork-bone wheat noodle, pork-bone taro and plain-old pork bone to name a few, each containing three pork bones and their respective marrow. Order any and Mr. Zhu will present a single plastic glove and a straw along with chopsticks and a soup spoon. Use the straw to slurp out the marrow and put the glove on your other hand while you gnaw the bits of meat off the bone like a caveman. Zhu’s Snacks, Stall 16, Golden Shopping Mall, 41-28 Main Street, Flushing

5. House Special Pork Chop Pancake | The Crispy Pancake
The katsu sandwich here has the distinction of being the hood’s only Japanese-Chinese mashup sandwich, and it’s a doozy. It’s listed as the house special, pork chop crispy pancake, but there’s no mistaking a Japanese katsu-style pork. The flaky pancake can barely hold the crunchy cutlet, which is crowned with a runny fried egg. The Crispy Pancake,  Stall No. 3, New York Food Court, 133-35 Roosevelt Ave, Flushing 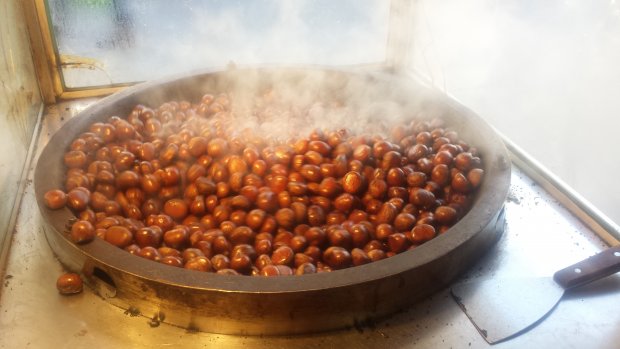 The sweet flesh within a roast chestnut is often sought out in Chinatown.

6. Chinese Roast Chestnuts | Chestnuts King
New York City’s only Chinese chestnut vendor lies just outside Oriental Express Food Court. The chestnuts are cooked whole over a gas-fired tumbler that agitates them with shiny black pebbles. Tianjin tang chao li zi, or Tianjin sweet roasted Chinese chestnuts, are smaller and sweeter than their Western counterparts. If you’re having trouble opening them, Ken or his wife will gladly show you how to split one open by running a fingernail across the flat back and gently squeezing to pop the sweet flesh out. Chestnuts King a.k.a. Tianjin Tang Chao Li Zi, 41-40 Main Street, Flushing

8. Ox Tongue and Tripe | Chen Du Tian Fu
It’s no surprise that Danny Bowien, a man who made his bones by turning the Sichuan flavor dial up to 15, counts himself a fan of Chen Du Tian Fu, which serves intensely flavored, no-holds-barred Sichuan. Ox tongue and tripe, actually a heap of sliced beef and irregular swatches of chewy honeycomb tripe bathed in chili oil and shot through with peanuts, cilantro and aromatic Chinese celery, will leave your mouth humming with chili heat and the tingle of Sichuan peppercorns. The Chinese name, fu qi fei pian, means “husband and wife offal slices” and refers to the couple back in Chengdu who invented the dish and were reputed to have an especially harmonious union. Chen Du Tian Fu, Golden Shopping Mall, 41-28 Main Street, Flushing 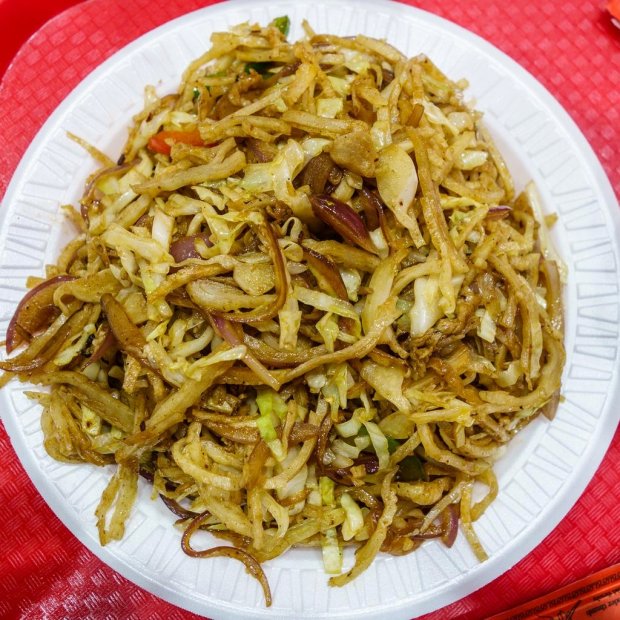 A pancake cut into strips is the game at Guchun Private Kitchen.

9. Hot and Spicy Beef Pancake Strips | Guchun Private Kitchen
Guchun’s one of the few places in New York City to score Huabei-style chao bing — that is, a bing, or pancake, cut up into noodle-like strips. Hot and spicy beef pancake strips ($6.75), ma la niu rou chao bing, takes these shreds of dough and mixes them with bits of beef, cabbage and other veggies. The combination of the pancake strips — some thin, some thick and slightly chewier — is a nice change of pace from noodles. To paraphrase Wu Tang Clan, Guchun Private Kitchen ain’t nothing to fuck with. Guchun Private Kitchen, No. 19, New York Food Court, 133-35 Roosevelt Avenue, Flushing

Joe DiStefano is the founder of Chopsticks and Marrow. He offers several food tours, including one of Flushing’s Chinatown, bookable through his site.