When Rene Redzepi stepped onto the stage at the third annual Mesamerica conference in Mexico City last week, his surprise appearance wasn’t for a photo-op. The first thing he did after giving Enrique Olvera, Mesamerica’s organizer and owner of the celebrated restaurant Pujol, a hug was point to the upper deck of the massive auditorium where approximately one thousand culinary students watched the three day conference unfold from the nosebleed section.

Redzepi called up to the students. “I noticed last year that you sat upstairs, separate from the other attendees relaxing down here on the couches. I’ve thought about it all year long.” Redzepi, the chef of celebrated Copenhagen restaurant Noma, went on to announce that the team from the MAD Foundation had spent the past several months raising funds for two lucky students to attend the MAD Symposium this August and stage at Noma for one month, all expenses paid. Three culinary schools were represented at Mesamerica and two students from each school were invited on stage for a cooking contest that would determine who was on their way to Noma.

A video of Jacques Pepin cooking an omelet was shown to the six nervous contestants who were then given seven and a half minutes to cook the perfect omelet. If the tension of cooking in front of over two thousand attendees with one of the world’s best chefs watching over you wasn’t enough, Redzepi announced just before the students started cracking their eggs that the judges would be Alice Waters, Danny Bowien, Enrique Olvera and Redzepi himself.

The next seven and a half minutes were filled with tension and drama, the audience cheering the students on as tears rolled down some of their cheeks when time was up and three had not completed the task. Redzepi asked who had cooked an omelet before and no one raised their hand. Olvera explained. “In Mexico, we cook huevos rancheros,” before sampling the three sorry looking omelets presented to the illustrious group of judges.

After sincere and intense deliberation, Redzepi announced that there were no losers in the group standing nervously before the audience who awaited the verdict just as anxiously. It was decided unexpectedly that along with the two students who would head to Noma, two would go to Chez Panisse, one would go to Mission Cantina, and the sixth would help Enrique Olvera open his New York City restaurant Cosme.

The crowd went wild as the students grinned in a state of shock at the life changing experience that awaited them. The moment was unforgettable not only for the student contestants but for those in the audience who sensed that something fundamentally important was taking place as a result of Mesamerica. And it wasn’t just about the omelets.

Mexico is one of the most celebrated and beloved food cultures in the world. Mesamerica pays homage to the reverence for culinary tradition that pumps blood through the heart of every Mexican kitchen. It invites chefs, farmers, food producers, distillers, brewers, academics and journalists who are turning to the ancient foodways of this vast and diverse country for fresh ideas and inspiration. 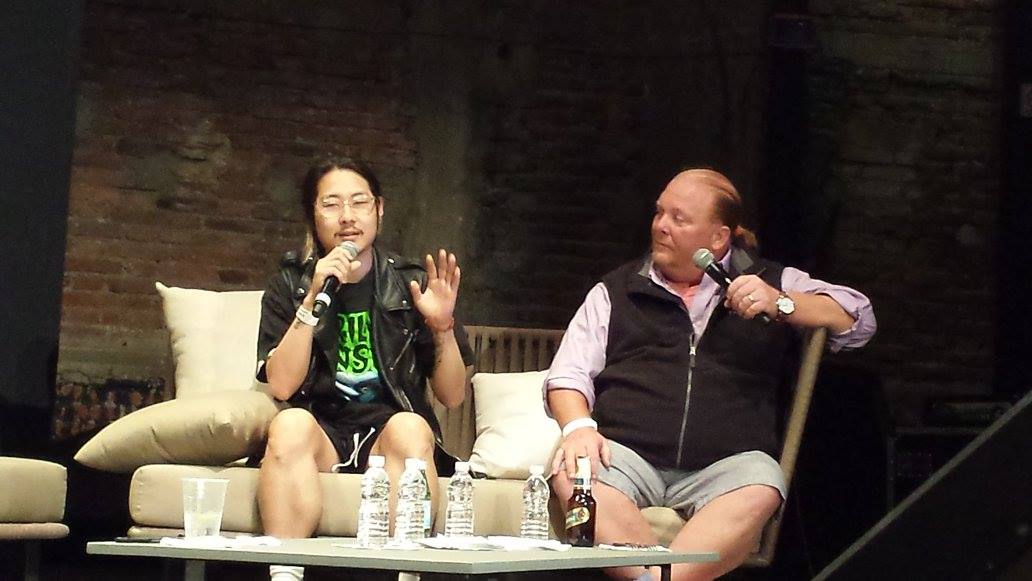 But Mexico isn’t only about fixed culinary traditions stuck in the dusty corridors of gastronomic time; Mesamerica also examines the evolution, or perhaps revolution, taking place in restaurant and home kitchens throughout this fascinating country.

Energy percolates from modern restaurants like Pujol, Maximo, Quintonil, Paxia, Rosetta and Sud 777 — where a young vanguard of chefs are showcasing tradition in contemporary dishes celebrating food’s power to elevate a nation, its ability to instill pride in its people, and its capacity to empower all those, native and non-native alike, who see Mexico as one of the culinary capitals of the world.

Mesamerica celebrates this distinction by showcasing chefs and food producers from every corner of the country and throughout the rest of the Americas. They are invited to speak before thousands about food’s ability to uplift a population in a way that little else can. Chefs are sometimes criticized for presenting at food conferences as a way to boost their egos and gain greater exposure, but Mesamerica feels like so much more than a gathering of people interested in self-admiration. And it all begins with the culinary students who were sitting in the bleachers.

On the first morning of Mesamerica there was a line of eager students proudly wearing their chef jackets snaking around the block. They were waiting anxiously to attend a conference that is promoting the culinary arts in Mexico like nothing ever has before. Culinary schools in Mexico City that once struggled to stay afloat for lack of interest are now brimming with enthusiastic students thirsty for knowledge about their culinary heritage, ready to stake a claim in its future.

Their enthusiasm for the conference reflects what food symbolizes for Mexico; the promise of a future bereft of the punishing poverty and endless struggle that its citizens have endured for centuries. Over and over again throughout the conference the point was driven home that food has the power to unify us, ease hardship, and provide a ticket out of destitution. Presenters outlined ways that they were trying to solve the daunting problems the nation faces, providing templates for others to follow, and an invitation to roll up our sleeves and get to work.

Mexicans have always embraced their food culture, but Mesamerica is the event that poignantly illustrates what a powerful tool food can be in fostering change and instilling pride in a nation. One of the most dispiriting issues facing the nation is childhood obesity as a result of being one of the biggest importers of commodity foods on the planet. It was announced during the opening speech of the conference that a group of Mexican chefs had just completed developing a curriculum for 40,000 Mexico City school children to teach them how to make more nutritious food choices and cook healthier meals. It symbolized the newfound mission in Mexico to uplift people through the power of food.

It became clear throughout the course of Mesamerica that the issues Mexicans face will not be solved by a three day long conference, no matter how dynamic the discussion might be. But hope resonated right up through the final night’s after party at Mercado Roma, Mexico City’s first modern food marketplace that opened its doors for the first time that night. Over 80 vendors offering samples of everything from Ancho chili liqueur, artisanal salts, and the Mexican dried and salted beef tasajo brimmed with optimism.

One vendor, Carlos Yescas, who opened his store La Queseria for the first time that night, told an especially poignant story about what it means for him to be Mexico’s only cheese shop exclusively selling Mexican cheese. Yescas once worked in immigration for the United Nations. He lived in New York City and his job was a painful and exhausting one.

It involved everything from trying to find the families in Mexico of unidentified deceased Mexicans who were working in the United States to trying to free workers enslaved in restaurants, farms and factories throughout America. Every hour was painful and grueling, a constant reminder to Yescas of the horrors faced by Mexicans who make the difficult decision to leave the crushing poverty of their own country for a life across the border that they hope will provide more opportunity. More often than not, it doesn’t and Yescas found himself on the frontline of that constant, spirit crushing reminder.

Eventually, he traded in his career at the United Nations to become a cheesemonger. It might seem hard to imagine how someone could follow this kind of trajectory but for Yescas, it makes perfect sense. He explained that he now has the ability to create for the ten families (and growing) who make cheese for him throughout Mexico an opportunity that will enable them to thrive in their own country. He’s certain that the family members of his cheese makers won’t be tempted to seek a better opportunity in America because he is providing them an enriching and financially viable option in their own country.

His story illustrated food’s ability to improve lives, foster change, and unite us. It’s what the spirit of Mesamerica is all about, right down to the omelet that would have had a much more promising future right from the start as a plate of huevos rancheros.

Read more about Mexican food and culture at Food Republic: